Luminex® Corporation has developed new xMAP® Sheath Fluid PLUS and Drive Fluid PLUS products. The new formulation contains three modes of microbial action, including sodium azide, sodium benzoate, and diazolidinyl urea, which replaces the single-mode ProClin™ formulation. The updated formulation in the PLUS products allows for greater stability and reduces variations in preservative potency and discoloration related to ProClin™ degradation. Moreover, the enhanced cocktail protects instrument fluidic pathways and eliminates potential environmental microbial resistance to ProClin™ preservatives. Read on to see a performance comparison of the previous xMAP® Sheath Fluid to the new xMAP® Sheath Fluid PLUS formulation in MILLIPLEX® multiplex assays.

Both Sheath Fluid formulations act as a medium for transporting the magnetic beads from the well to the detection channel. The experiments performed were intended to demonstrate that the PLUS formulation is compatible with a range of assay chemistries and does not cause adverse effects related to assay performance. This study demonstrates that the MILLIPLEX® multiplex assays generated expected results regardless of the type of Sheath Fluid used.

For the scope of this study, Standards and Quality Controls (QCs) from four MILLIPLEX® multiplex panels were evaluated with both Sheath Fluid and Sheath Fluid PLUS formulations.

Standard curves from each of the four MILLIPLEX® multiplex panels were run in duplicates and QCs were analyzed in quadruplets on a single 96-well plate, prepared according to the kit protocol. One 96-well plate was prepared for use with Sheath Fluid and one with Sheath Fluid PLUS. The plates were run on the Luminex® 200™ system. The data was analyzed using Belysa® Immunoassay Curve Fitting Software (Cat. No. 40-122). 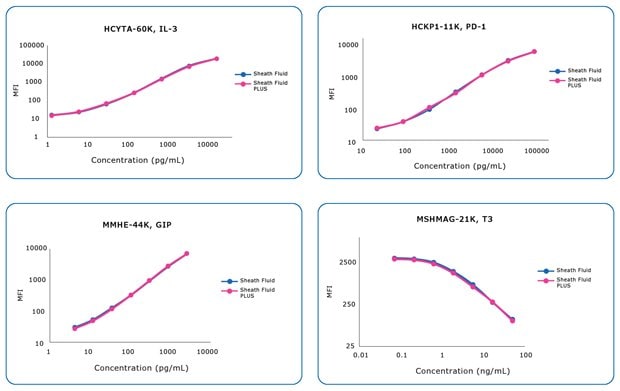 The %CVs at each standard point and background, analyzed in duplicate, were <10% (Figure 2). 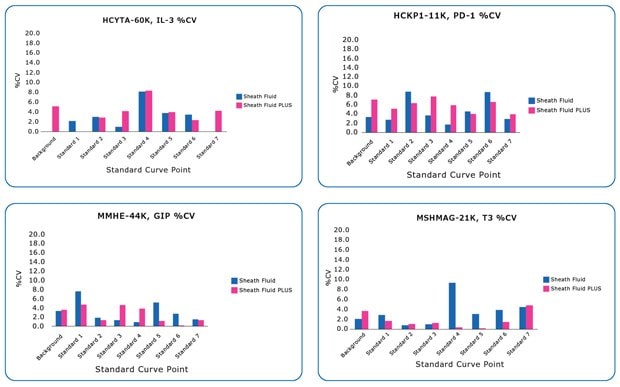 Furthermore, QC data was also evaluated in quadruplicate to compare Sheath Fluid PLUS against Sheath Fluid (Table 2). QC values demonstrated little variation and fell within the assigned QC ranges. For the scope of this article, data for only one analyte across each panel is shown. This data is representative of all the analytes in each of the respective panels.