With the angiogenesis pathway being complex and containing numerous targets to analyze, simultaneous quantification of multiple biomarkers, such as through the use of the MILLIPLEX® Human Angiogenesis/Growth Factor Panel 1, saves valuable resources. Read on to learn how this panel was used to correlate angiogenesis biomarkers with early metastatic progression in NSCLC.

Angiogenesis is a fundamental process in growth, development, and tissue repair. It involves the underlying vascular infrastructure crucial to the delivery of nutrients that is created by a well-studied combination of growth factors and regulatory elements. Dysregulation of this process leads to abnormal blood vessel growth involved in many common diseases and plays a significant role in tumor growth and metastasis.

How Does Angiogenesis Relate to Cancer?

In many types of cancer, aberrations in regulatory signaling pathways lead to sustained angiogenesis, a necessary component fueling the ability of cancerous tissue to thrive via continuous unregulated replication 1,2. The process of angiogenesis is normally a tightly regulated balance between pro-angiogenic growth factors (VEGF, FGF, PDGF, TGF) and anti-angiogenic signaling molecules (thrombospondin, angiostatin, and endostatin), along with complex membrane-bound receptors and endothelial cell interactions1,2. Malignant cells, however, sway this delicate equilibrium, resulting in rapid vascular growth with various underlying structural and functional abnormalities. From an investigative and therapeutic standpoint, it is important to identify and subsequently target the growth factors or regulatory elements that play crucial roles in allowing angiogenic dysregulation. With the overwhelming numbers of these targets for potential investigation, it is a challenge to decide among them and efficiently quantitate multiple targets.

Current detection assays are limited by minimal automation, low overall output, and excessive cost. To quickly and affordably identify specific angiogenic processes, it is necessary to screen large panels of vascular analytes and growth factors with some level of automation or high throughput.

The utility of the MILLIPLEX® Human Angiogenesis/ Growth Factor Magnetic Bead Panel 1 in the analysis of 17 targets involved in the angiogenesis pathway was determined in a cohort of 38 patients with various stages of non-small cell lung cancer (NSCLC). The objective was to determine if the MILLIPLEX® assay can accurately quantify known angiogenesis targets in a practical, high-throughput fashion.

Serum was collected from a total of 38 patients with pathologically confirmed NSCLC between 2004 and 2008 at Rush University Medical Center in Chicago, IL. Full Institutional Review Board approval was obtained for this study, and patient consents are on record for all participants. Twelve patients were pathologically staged3 as T1-2N0M0 (“no metastatic progression”), 12 with T1-3N1-2M0 (“locally-advanced”), and 14 patients with T1-4N1-2M1 disease (“presence of distant metastases”). All patients were not previously treated with either chemo- or radiotherapy.

Serum was processed from whole blood using conventional methods within an hour of venipuncture and archived at -80 °C. No sample was subjected to more than two freeze/thaw cycles for this study. Frozen samples were thawed completely at 4 °C, mixed by vortexing, and centrifuged at 10,000 x g for 10 minutes to remove particulates. All samples were diluted at 1:3 in the provided assay buffer solutions, as recommended in the MILLIPLEX® assay kit protocols.

Antibody-conjugated magnetic beads were prepared by sonicating for 30 seconds, then vortexing for 1 minute. All samples, quality control samples, and standards were prepared as recommended in the MILLIPLEX® assay kit protocols with supplied diluents and processed in duplicate batches. The protocol was as follows:

As described above, the angiogenesis multiplex panel was used to quantify 17 analytes relevant to angiogenesis in clinical specimens representative of the different stages of disease progression in NSCLC. As seen in both Table 1 and Figure 1, the results showed superb assay precision across a wide range of analyte concentrations. Results showed comparable performance characteristics in the patient samples, as shown in Table 2.

Based on the cohorts tested, significantly higher expression of IL-8, HGF, and HBEGF in serum was observed from patients with “distant metastases”/ disseminated disease, as compared to serum from patients with no metastases (Table 2, Figure 2). These trends were consistent with previous work produced by this laboratory, that varying expression of growth factors and other signaling molecules likely involved in the angiogenesis pathway exist and may predict tumor metastasis4. 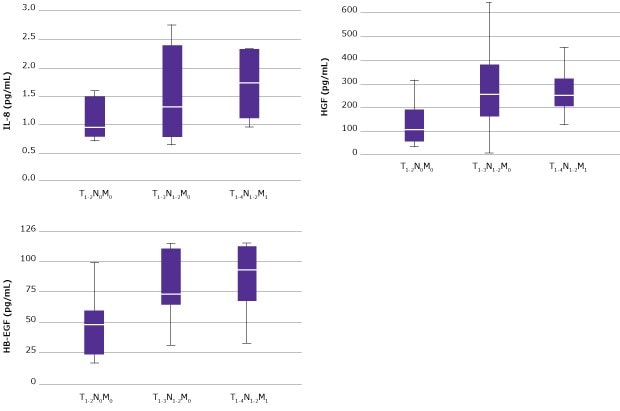 When these measured values were evaluated by a Mann-Whitney Rank Sum test in relation to the clinical groups evaluated, several biomarkers correlated with the progression of the disease to the locoregional lymph nodes (see Figure 2). Multiple markers (e.g., EGF, PLGF, VEGF-A, and VEGF-C) trended towards significance. However, significance was not reached due to the low number of patients involved in this study. Interestingly, the patterns observed only provided insights into the early stages of metastatic progression and provided few insights into biological processes necessary for the distant spread of the tumor.

Given the findings presented previously, the focus was put on the T1-2N0M0 and T1-3N1-2M0 groups in terms of clinical outcome measures. Specifically, the median time to recurrence in relation to biomarker concentrations was evaluated using the median value for each biomarker as the threshold (see Figure 3). A total of 9 biomarkers were found with a log-rank p-value less than 0.05. Not shown in Figure 3 are BMP-9, Follistatin, HB-EGF, Angiopoietin-2, and VEGF-C. These data may provide important insights into clinically relevant biological changes that are mechanistically implicated in disease recurrence. 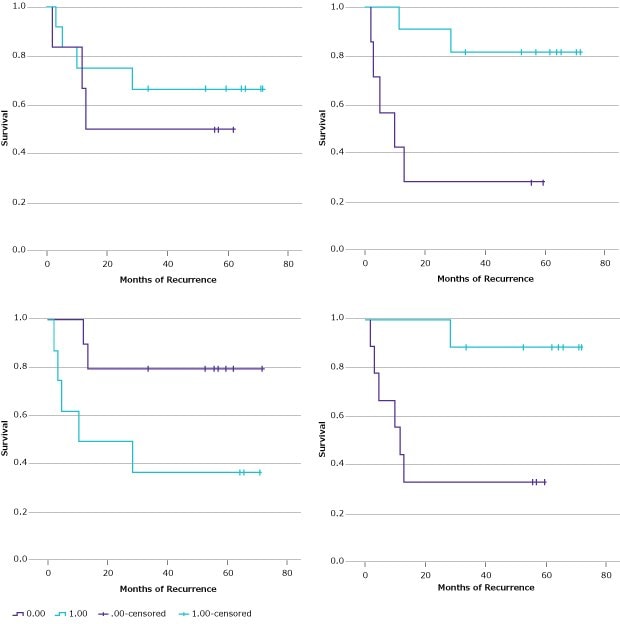 Figure 3.Kaplan-Meier estimates of the median time to recurrence. Clinical outcomes for the T1-2N0M0 (“no metastatic progression”) and T1-3N1-2M0 (“locally advanced”) groups were evaluated via log-rank analysis for each of the 17 biomarkers for the median time to recurrence. Shown above are the Kaplan-Meier curves for (A) FGF-2 [p=0.049], (B) VEGF-D [p=0.009], (C) HGF [p<0.001], and (D) PLGF [p=0.010]. Purple lines represent patients with values less than measured median concentrations, whereas the cyan lines represent values larger than the measured median concentrations.

These findings are illustrative of the general practical ability of this MILLIPLEX® assay kit to generate information that can directly enhance studies of cancer metastasis. Because the angiogenesis pathway being studied here is so complex and with so many targets to analyze, simultaneous quantification of multiple analytes, such as that provided by the MILLIPLEX® Human Angiogenesis/Growth Factor Magnetic Bead Panel 1, conserves valuable resources. This panel accurately measured multiple angiogenesis biomarkers relevant to this research. By selecting combinations of analytes within the panel, any researcher can easily customize the panel to answer specific research questions.