Paprika is a spice made from dried sweet peppers, and is used for flavor and color in many types of cuisine. Contamination with polynuclear aromatic hydrocarbons (PAHs) can occur when pepper plants are exposed to these pollutants in the environment and/or during the drying process. The use of herbs in cooking and food production has become increasingly popular, thus exposure to PAHs, specifically those with carcinogenic properties, is of concern. The European Union (EU) has gone so far as to regulate the maximum allowable levels of several PAHs in dried herbs and spices.

Specifically for paprika, the maximum allowable levels have been set to 10 ng/g for benzo[a]pyrene and 50 ng/g total for the sum of benzo[a]pyrene, chrysene, benzo[a]anthracene and benzo[b]fluoranthene.1

The sample preparation methods used in the testing of PAHs in herbs and spices require solvent extraction, followed by a cleanup step. The cleanup methods that have been used include gel permeation chromatography (GPC), and solid phase extraction (SPE) with silica gel. 2,3 In the last several years, a new approach for cleanup of high background samples to be analyzed for PAHs has utilized a dual layer SPE cartridge containing a Florisil® top layer and Z-Sep/C18 bottom layer. This cartridge, the Supelclean™ EZ-POP NP, has been used for direct extraction of PAHs from edible oils and for cleanup of extracts of biota samples.4,5 In this work, PAHs were analyzed from paprika samples using an optimized QuEChERS extraction followed by cleanup with the EZ-POP NP SPE cartridge. Compared to QuEChERS cleanup with loose sorbents, the EZ-POP NP yielded a much cleaner extract. Optimization of the extraction and EZ-POP NP cleanup procedures resulted in recoveries of >70% at a spiking level of 10 ng/g; calculated without internal standard correction.

Paprika samples were obtained at a local grocery store. Samples for evaluation of method accuracy and reproducibility were spiked at 10 ng/g with a mixture containing the PAHs listed in Table 1. After spiking, samples were allowed to equilibrate for 1 hour prior to extraction. Sample extracts were prepared using the procedure described in Figure 1. Extracts were then subjected to SPE cleanup using the EZ-POP NP cartridge, as detailed in Figure 2. Analysis was done by GC/MS/MS using the conditions shown in Table 2 and the transitions in Table 1. An internal standard mixture was added to the extracts just prior to the GC analysis, and was used only for monitoring instrument performance. Samples were quantitated against a matrix-matched calibration curve prepared in unspiked paprika extract.

GC/MS/MS Conditions. The analysis conditions were optimized for PAHs. Higher injection port and MS temperatures, along with a pressure pulsed injection and a 2 mm ID inlet liner, were used to improve response and peak shape. The oven temperature program was based on that used by Anderson et al., and was necessary to provide chromatographic resolution of isomers such as benzo[b], [k] and [j] fluoranthene, that cannot be distinguished by their MRM transitions.6 This temperature program, in combination with the GC capillary column (SLB®-PAHms), provided adequate resolution of all isomeric sets. An example of this is shown in Figure 3 for the isomers benzo [b], [k] and [j] fluoranthene. These isomers cannot be separated on a 5% phenylmethylsilicone or “X-5” type phase. 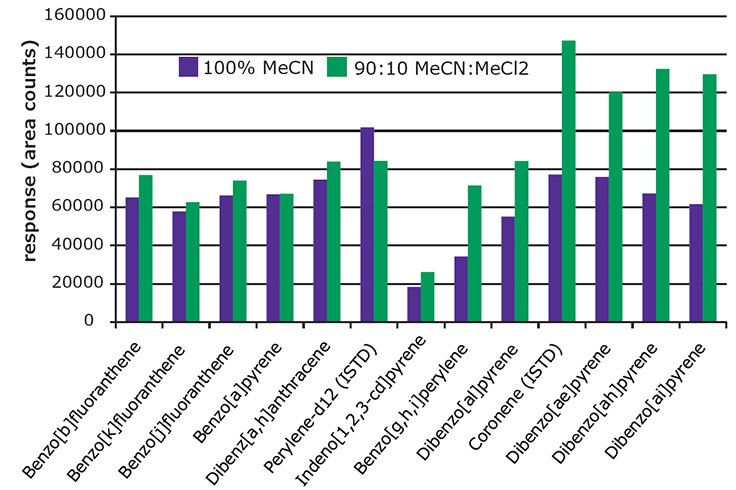 Sample extraction was done based on a “QuEChERS- like” approach. The composition of the extraction solvent was optimized from the 100% acetonitrile normally used for QuEChERS to increase recovery of the heavier PAHs.

Figure 4 presents a comparison of absolute response for the heavier 5 & 6 ring PAHs obtained from paprika spiked at 10 ng/g, and extracted with 100% acetonitrile and a mixture of 90:10 acetonitrile:methylene chloride. The resulting extracts were analyzed before SPE cleanup to evaluate the effect of the extraction solvent only. 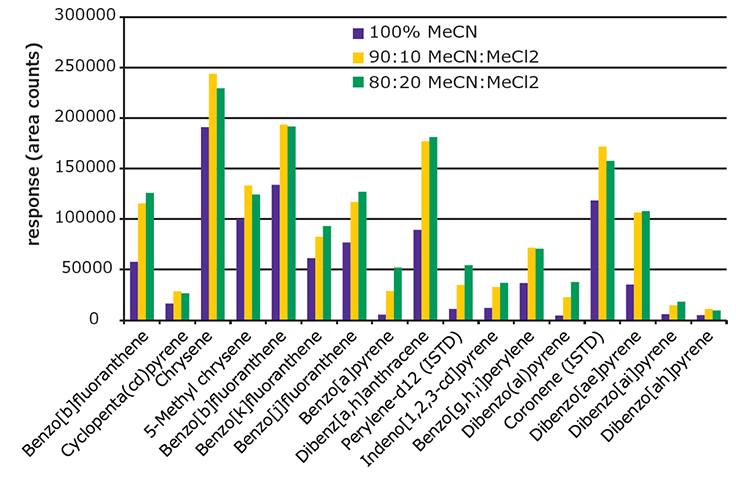 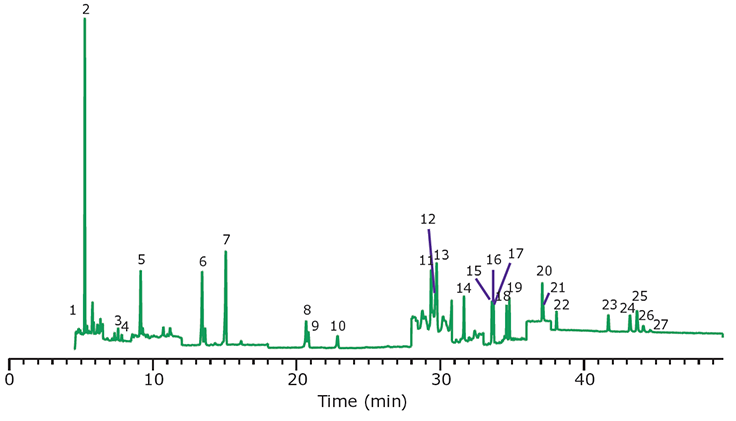 Figure 8.GC/MS/MS Analysis of PAHs in Paprika, Spiked at 10 ng/g, After Cleanup Using EZ-POP NP. Peak IDs are as indicated in Table 1.

In the case of dry samples such as paprika, QuEChERS cleanup using loose sorbents does not provide enough capacity for reducing background to an acceptable level. If analysis is for pesticides, dual layer SPE cartridges containing carbon and primary secondary amine (PSA) or aminopropyl functionalized silica can be used for cleanup. However, for PAHs, carbon cannot be used as it will strongly retain these compounds, resulting in poor recovery. EZ-POP NP does not contain carbon, and thus is suitable for PAHs. Its cleanup capacity was compared directly to QuEChERS using blends containing similar sorbents to those in the EZ-POP NP cartridge. Extracts of paprika generated using 90:10 acetonitrile:methylene chloride and cleaned using EZ-POP NP and QuEChERS are shown in Figure 6. Compared to no cleanup, both approaches reduced color, with the EZ-POP NP having the lightest color. The sample cleaned with Z-Sep showed some oily residue, as seen on the inside of the vial. Using GC/MS-scan for comparison (Figure 7), the EZ-POP NP cleanup produced the lowest background, especially with regard to removal of C16 and C18 fatty acids. Only Z-Sep+ data is shown here, as it had the lowest background of the three QuEChERS sorbents included in the comparison. Using the final, optimized cleanup method with EZ-POP NP, all PAHs were detected free of background as shown in Figure 8.

Recovery and reproducibility data for analyses of paprika samples spiked at 10 ng/g is presented in Table 3. All recovery values were determined without internal standard correction and thus are absolute. Overall, recoveries were very good (>70%) with RSD values of <15%. The exceptions were fluorene and dibenzo[a,h] pyrene. There was some matrix interference eluting with the fluorene peak (present in both MRMs monitored), and for dibenzo[a,h]pyrene, response was erratic from the spikes, which resulted in poor reproducibility.

Table 3Recovery and Reproducibility for PAHs from Paprika, Spiking Level of 10 ng/g (n = 3)

In addition to the paprika used for spike recovery, two more brands were analyzed unspiked. One was labeled as “smoked paprika” and thus was expected to contain substantially higher PAH levels. Both brands were analyzed in duplicate, and the results are summarized in Table 4. Several PAHs were detected in brand A; but none were at levels above the EU limits for herbs and spices. The smoked sample, on the other hand, contained detectable levels of all four of the PAHs listed in the EU regulation. Benzo[a]pyrene was present below the maximum allowable level of 10 ng/g; however, the combined levels of this PAH plus benzo[a] anthracene, chrysene and benzo[b]fluoranthene were well above the 50 ng/g maximum. This is to be expected, since the smoking process produces PAHs which subsequently end up in the paprika. However, the EU regulation specifically states that since smoked herbs are generally consumed in such small quantities, they are exempt from these regulatory limits.

Heavier PAHs can be difficult to analyze at low levels by GC/MS due to issues with response and peak shape. Instrument performance can rapidly decline with the injection of dirty samples. To determine if this was occurring with analysis of the paprika extracts, internal standards of non-target PAHs from 4-6 rings were added to the extracts prior to analysis. Response of these compounds was then monitored throughout the run. No decline in response was observed for any of the internal standards, and the variation in area counts throughout the run was <15% for each. This indicates that the cleanup was adequate to produce a rugged GC method.

A sample preparation method was developed for the low level analysis of PAHs in paprika powder. The extraction protocol utilized a “modified QuEChERS” approach in which methylene chloride was added to the extraction solvent to increase recoveries. Cleanup was achieved using SPE with the EZ-POP NP cartridge with the addition of methylene chloride to the acetonitrile elution solvent. This modification resulted in absolute recoveries of the 4-6 ring PAHs of >80% with RSD values < 15% for most. The SPE cleanup reduced background in the extract, especially for C16 and C18 fatty acids, significantly compared to QuEChERS cleanup using loose sorbents. Analysis of the PAHs on an application specific GC column (the SLB®-PAHms) was necessary to chromatographically resolve isomeric sets which cannot be discerned based on MRMs.

For the complete range of our PAH standards, please visit SigmaAldrich.com/pahstandards