Vitamin D deficiency has become a topic of interest in recent publications.1-3 Vitamin D, along with calcium, promotes proper bone growth in children and aids in the prevention of osteoporosis in older adults. Vitamin D is present in two forms, Vitamin D3 and Vitamin D2. Both D2 and D3 vitamins are metabolized in the liver to form 25-hydroxyvitamin D2 (25-OH D2) and 25-hydroxyvitamin D3 (25-OH D3), respectively. In addition, biologically inactive 3-epi analogs of 25-OH D2 and 25-OH D3 have been reported, especially in young children.3 Recent studies have indicated that separation from the inactive 3-epi analogs may provide more accurate information for treatment and prevention. Analytical methods that can accurately quantitate both of the 25-hydroxyvitamin D analytes in the presence of 3-epi analogs may become essential for diagnosis and monitoring of patients with vitamin D disorders. The structures of the vitamin D analytes are shown in Figure 1.

HPLC analysis of 25-OH D2 and 25-OH D3 is traditionally performed using C18 stationary phases. Under such conditions, the 3-epi analogs are poorly resolved, and thus are included in the overall reported value. Recently, Phinney, et al., reported the use of a cyano column for the effective separation of the 25-OH and the 3-epi forms for use in reference measurement procedures.1 Although effective, the conditions necessitate a run time greater than 40 minutes limiting its utility for routine high throughput analyses. LC-MS analysis methodologies for 25-hydroxyvitamin D3 are not without disadvantages as well. Sample preparation from serum requires protein precipitation with organic solvents or strong acids. This technique results in gross depletion levels of proteins from the sample, but also results in high levels of matrix interference from the still present phospholipids. LC-MS methods using standard protein precipitation are susceptible to ion suppression caused by the PLs or require gradient elution to wash this co-extracted matrix from the column resulting in longer cycle times for sample analysis.

This study continues to detail new methodology for the analysis of Vitamin D metabolites introduced previously. In this study, the HybridSPE-Phospholipid was utilized to selectively extract the phospholipids from the serum sample. This technique combines the simplicity of standard protein precipitation with the added benefit of additional matrix removal. The combination of this novel sample preparation technique along with the unique selectivity of the Ascentis Express F5 HPLC column provides a fast and simplified bioanalytical method for the associated Vitamin D metabolites.

Rat serum purchased from Lampire Biological Laboratories (Pipersville PA) was spiked at 300 ng/mL with 25-hydroxyvitamin D2, 25-hydroxyvitamin D3 and epi-25-hydroxyvitamin D3. An internal standard was not included as part of this method. Protein precipitation was performed offline by adding 100 μL of spiked serum into a 500 μL 96-well collection plate followed by 300 μL of 1% formic acid acetonitrile. Samples were mixed by performing five 300 μL draw/aspiration cycles using a digital pipetter, then set for 5 minutes before transferring 200 μL of precipitate into the HybridSPE-Phospholipid 96-well plate. Samples were passed through the HybridSPE-Phospholipid plate by applying 10” Hg vacuum for 4 minutes, the resulting filtrate was analyzed directly.

As a comparison, spiked rat serum was also processed using standard protein precipitation by adding 100 μL of serum into 2 mL centrifuge vials followed by 300 μL of 1% formic acid acetonitrile. Samples were vortexed and centrifuged, and the resulting supernatant was collected and analyzed directly. Figures 3a and 3b demonstrate the selectivity of the Ascentis Express F5 phase enabling isocratic resolution of 25-OH D3, 25-OH D2 and epi-25-OH D3 in less than four minutes, enabling and allowing for quantitation of all three components in one chromatographic analysis. Table 1 details a comparison of the average analyte response after HybridSPE-Phospholipid sample preparation for the three Vitamin D metabolites versus protein precipitation. The responses for the metabolites were 10-70% greater using HybridSPE-Phospholipid and a significant improvement was observed with the analysis of 25-OH D2 in which more reproducible results were achieved. By removing the interfering phospholipid matrix, enhanced sensitivity and precision were demonstrated for the three Vitamin D metabolites. 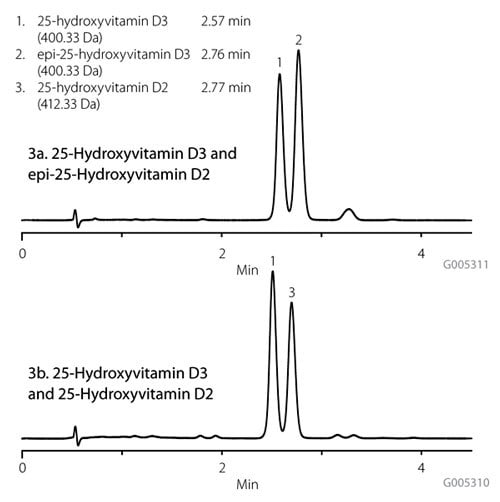 Separation of the biologically inactive 3-epi analog serves to provide improved data in support of vitamin D related clinical diagnostics and treatment. The pentafluorophenyl stationary phase has been shown to provide superior selectivity for the separation of the closely related 25-OH D3 and 3-epi-25- OH D3 as compared to methods reported in the literature. The unique selectivity of the Ascentis Express F5 combined with the selective phospholipid depletion of the HybridSPEPhospholipid 96-well plate enable a fast and efficient analysis of 25-hydroxyvitamin D and related forms, that would otherwise be unattainable with traditional sample prep and reversedphase HPLC approaches.