For efficient therapeutic drug monitoring, it is important for clinicians to have access to fast and robust analytical methods for accurate assessment of drug efficacy. Industrial trends toward highly specific LC/MS applications over traditional immunoassay have resulted in the need for high-speed chromatographic assays along with simplified sample preparation methods. Often the limitation of a bioanalytical technique is based upon the effectiveness of the sample preparation technique. Plasma and serum samples are often susceptible to assay irregularities due to matrix-induced interferences. In this study the impact of matrix interference is investigated with respect to precision and accuracy of antiarrhythmic cardiac drugs from plasma samples.

The focus of the study reported here was to develop a bioanalytical assay for antiarrhythmic cardiac drugs and associated metabolites from plasma samples. The goal was to develop a robust analytical technique that facilitates high throughput application with simplified sample processing. Figure 1 shows the structures of the antiarrhythmic drugs evaluated in this study. The utility of these antiarrhythmic drugs vary: lidocaine is used for ventricular arrhythmias, flecainide is administered for tachyarrhythmia, while amiodarone is utilized in both ventricular and atrial cardiac dysrhythmias.1 Having an analytical method capable of analyzing a range of antiarrhythmic agents allows for simplified analysis while increasing the services the testing laboratory can offer. This not only pertains to LC/MS analysis, but also to sample collection and sample preparation. The first part of the study focused on the chromatographic conditions for resolution of lidocaine, flecainide, amiodarone and the associated metabolite, desethylamiodarone. The basic nature of these antiarrhythmic agents makes them ideal candidates for HILIC (hydrophilic interaction) chromatographic separation. The benefit of HILIC over traditional reversed-phase chromatography is two-fold for both sample introduction and analyte detection.2 First, the high acetonitrile concentration of HILIC mobile phases allows for direct analysis of precipitated plasma samples without the need for additional sample solvent exchange. Second, the high acetonitrile content provides increased analyte response in positive ESI MS detection. Of the various HILIC-mode columns tested, method development for this assay determined the Ascentis® Express HILIC, 2.7 μm particles, provided the best chromatographic resolution of the antiarrhythmic drugs while maintaining high peak efficiency for enhanced detection levels.

Once the chromatographic and LC/MS conditions had been optimized, the second part of this study was to evaluate the effectiveness of sample preparation and the impact of sample matrix on the assay. Often when dealing with plasma samples, endogenous matrix such as phospholipids can cause irreproducibility in quantitation due to ionization-suppression effects. Coelution of endogenous matrix with target analytes can result an arbitrary decrease in the response of target analytes, thus decreasing the overall accuracy of the method.3

The determination of matrix interference is a critical aspect in any bioanalytical method development. In this case, a standard protein precipitation method was compared with hybrid zirconia coated silica particles in 96-well SPE format for processing the plasma samples prior to LC/MS analysis. 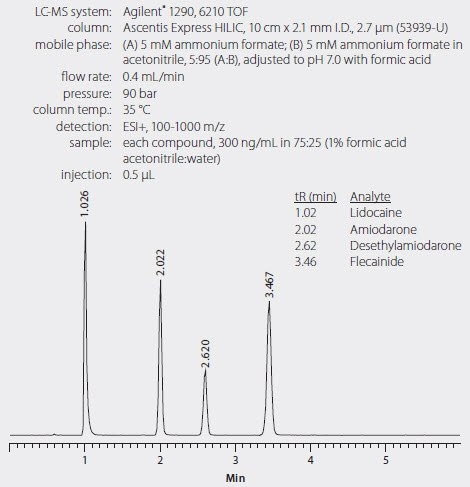 Preparation and Extraction of Plasma Samples

Rat plasma stabilized with K2EDTA was acquired from Lampire Biological Laboratories (Pipersville Pa). Plasma was spiked directly from stock standard to a level of 400 ng/mL of each analyte. Concentration of final sample work up in both techniques is equivalent to 100 ng/ mL.

Figure 2 shows the chromatographic resolution of the antiarrhythmic drugs on the Ascentis Express HILIC. Analysis was conducted on a time of flight (TOF) LC/MS and demonstrated a linear analyte response across the concentration range as shown in Figure 3. 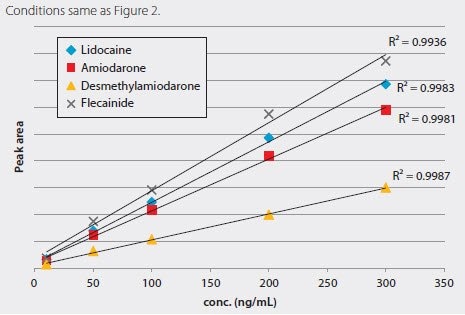 Using the standard protein precipitation technique, matrix interference was observed with the overlap of endogenous phospholipids and the target analytes. As shown in Figure 4, the elution region of amiodarone, desethylamiodarone and flecainide overlaps with the elution of the endogenous phospholipids. This raises the issue as an area of concern for possible detection irregularities. As observed in the matrix trace, phospholipids are carried over from previous sample injections causing real concern of method reproducibility. When analyte levels were calculated against the calibration curve, the concentration of desethylamiodarone and flecainide were substantially lower than the spiked levels. Significant ion suppression was observed due to the endogenous phospholipids in the plasma samples. The coefficient of variation (% C.V.) value was extremely high for both desethylamiodarone and flecainide further confirming the concern of matrix interference.

Endogenous phospholipids can dramatically impact the precision and accuracy of a bioanalytical method. During development, the impact of sample matrix on analyte detection should be a priority in method validation. Failure to do so can result in inaccuracies in reported levels, thus impacting the assessment of patient health. Eliminating matrix effects in LC/MS is imperative to producing reliable and accurate bioanalytical methods. The targeted phospholipid selectivity of the HybridSPE-Phospholipid technique enables simplified sample processing with no phospholipid matrix interference, while exhibiting excellent recovery from plasma and serum samples. This application demonstrates how selectivity in both sample preparation and chromatographic separation allows for a simplified and efficient bioanalytical method resulting in a highly precise and accurate assay. The fast HILIC chromatography on Ascentis Express paired with the selective sample preparation of HybridSPE-Phospholipid and Cerilliant® Certified Reference Materials resulted in a robust and precise bioanalytical method.

Our complete offering of solvents, reagents, columns, sample prep and other consumables to maximize speed and sensitivity in bioanalysis can be found atsigma-aldrich.com/bioanalysis