There is perhaps nothing more frustrating to a cell culturist than removing a dish from the incubator only to find that it’s full of dead cells. Getting to the bottom of the problem can be very challenging and time consuming, but with diligence and proper recordkeeping, the death of cells in culture can be diagnosed and avoided.

Cell death occurs primarily in two forms: passive and programmed. Passive cell death, or necrosis, is an ATP-independent process that results from sudden and severe environmental stress that leads to cell swelling, and eventually cell lysis. In contrast, programmed cell death is ATP-dependent. One form—apoptosis—can be triggered externally or internally, and leads to cell shrinkage, increased cytosolic Ca2+ concentrations, and membrane blebbing. Another form of programmed cell death—autophagy—is a process which normally promotes cell survival by degrading and recycling cellular components through the cell’s lysosomal system. Under extreme conditions of stress, however, autophagy can lead to cell death, and is characterized by the presence of a vesicle that encompasses the mitochondria, endoplasmic reticulum, and ribosomes, and then delivers them to the lysosomal system. Recent research suggests that apoptosis and necrosis are two extremes among as many as ten or more different forms of cell death, and that there is a significant amount of crosstalk between these two processes. 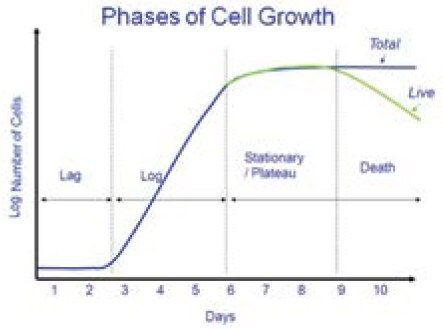 So Many Ways to Go: A Cell Death Glossary

Anoikis: apoptosis in adherent cells that occurs due to the loss of matrix interactions. May be a major mechanism for tumor-suppression.

Apoptosis, extrinsic: programmed cell death induced by extracellular signals that start with the ligation of transmembrane receptors, including FAS

Apoptosis, intrinsic: programmed cell death that may or may not be dependent on caspase, characterized by altered mitochondrial membrane potential

Necroptosis: a programmed form of necrosis, characterized by TNFR1 signaling through RIP1, when caspase-8 is inhibited

Parthanatos: depletion of ATP and NAD+ by excess polymerase activity

Secondary necrosis: necrosis that occurs as a consequence of apoptosis, often observed in cell culture

Careful microscopic examination of culture vessels may reveal obvious cell death characterized by cell crenation, blebbing, and debris consisting in part of cell ‘ghosts’, or membranous remains. For more subtle cases, there are a variety of assays available for assessing cell death in cultures. Perhaps the most accessible of these is the trypan blue exclusion assay that is based on the principle that healthy cells with intact membranes will exclude the dye, and is quickly performed on detached or suspension cells by hemacytometer. Viability assays can be used to distinguish and quantify live cells. These assays assess cell viability by measuring cellular functions such as enzyme activity, ATP production, plasma membrane function, and cell adherence.