Biotechnology and GMO Labeling Requirements: An in-depth Look at Nootkatone 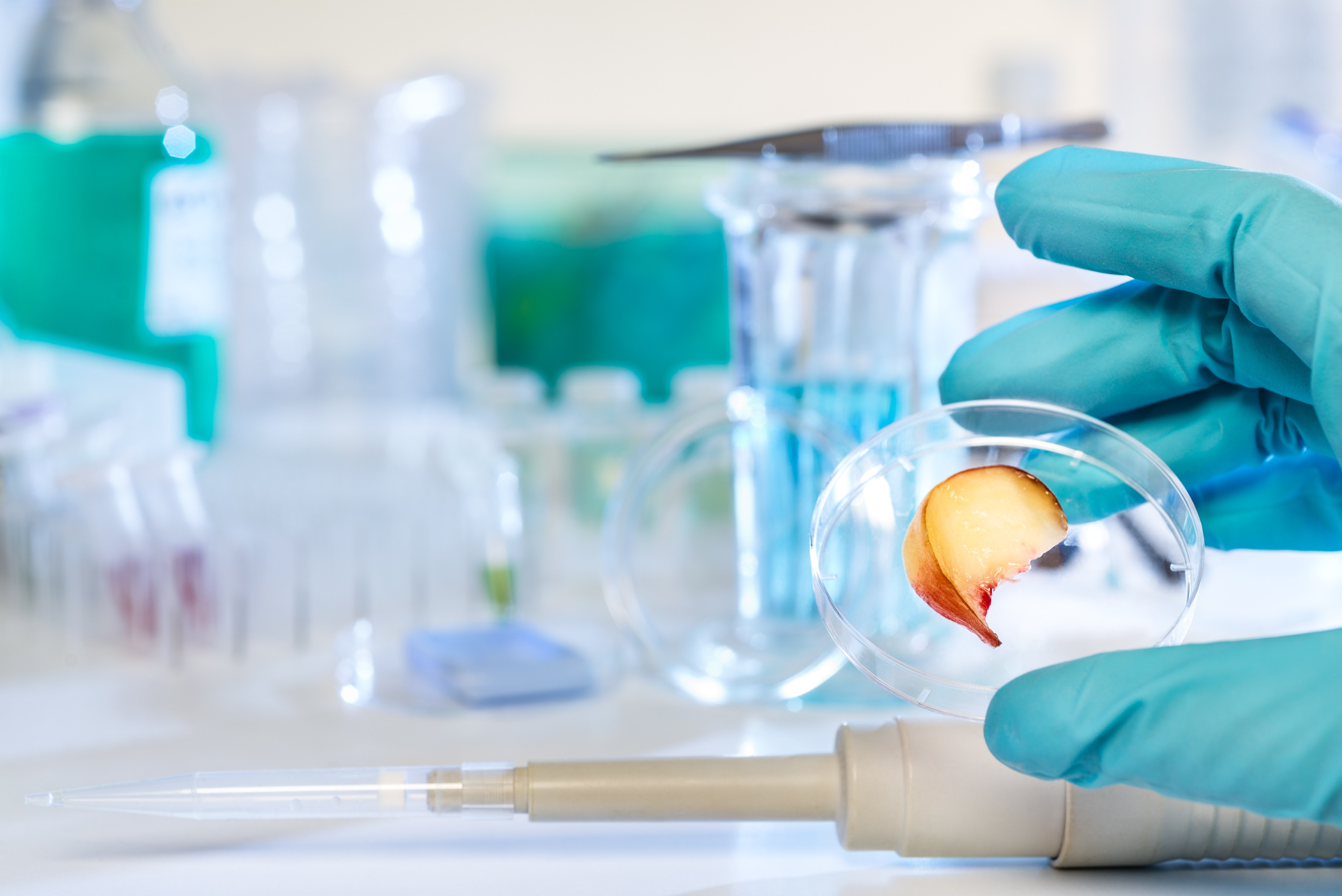 The Big Impact of a Tiny Insect

The Asian citrus psyllid is a tiny insect, only 4 mm long, smaller than a grain of rice. This insect may be small but its impact on the citrus industry is huge. As its common name implies, this little insect is native to Asia, but global trade has brought it around the world. The psyllid feeds on citrus plants, but its real impact has been as a carrier of the plant disease Huanglongbing (HLB) or yellow dragon disease as it is known in China. Better known as citrus greening disease in the US and Europe, this disease has devastated citrus crops around the world. Since it was first detected in Florida in the early 2000’s, for example, it’s spread through America’s southern citrus farms reducing citrus yield by >70%.1 Infected trees produce fruits significantly smaller than that of healthy trees, and the infected fruit has an unpleasant, bitter taste making them unmarketable.

The loss of citrus crops impacts not only the fruit and juice market, but downstream products such as flavors and essential oils. Nootkatone, for example, is one of the primary fragrance substances in grapefruit peals and is a highly sought-after aroma chemical, widely used as a natural flavor, but also as a natural fragrance. Some brands, such as 4711 Eau de Cologne, have been reliant on natural aroma chemicals from citrus since the 18th century. The drive for natural cosmetics and household products has renewed interest in nootkatone for other applications including candles and soaps. It is also a natural insect repellent, and many firms have embraced and marketed nootkatone-based, natural insect repellents. Citrus greening disease (HLB) has had a devastating impact on grapefruit crops and therefore the natural nootkatone market.

With so many applications and the loss of natural sources it is no wonder the flavors and fragrance industry is relying more heavily on biotechnology as a source for nootkatone and other impacted chemicals. BASF, for example, acquired the Dutch biotech firm Isobionics in 2019 to gain the biotechnology manufacturing for nootkatone and other aroma chemicals. Similarly, BASF partnered with Conagen to gain access to their biotechnology produced vanillin which is the primary aroma chemical in the world’s most popular flavor, vanilla.2

Many of the methods for producing aroma chemicals through biotechnology focus on the development of novel enzymes to convert inexpensive and readily available raw materials to more valuable products. Valencene, a terpene derived from Valencia orange, can be enzymatically converted to nootkatone. Valencene is much more abundant and easily extracted than nootkatone which is why natural nootkatone costs 10 times or more than natural valencene.

High-yield enzymatic conversion of valencene to nootkatone has been known for almost 50 years and there is active research to use biotechnology to optimize this process. Concerns over raw material reliability have driven the market to seek routes with more reliable supply chains. The biotechnology-driven modification of microorganisms offers a potential solution. For example, yeasts can convert glucose to valencene. Yeast can also be genetically engineered (GE) to optimize this process thus providing a route to nootkatone wholly divested from the challenges facing citrus crop supply.

A Natural Advantage but Labeling Required

Through biotechnology, flavors and fragrances firms can also bring to market products that meet the regulatory requirements and industry guidance to be designated as natural. Customer perception puts a high value on natural flavors and fragrances as opposed to their synthetic or artificial counterparts. Even where synthetic routes may provide the aroma chemicals from petroleum raw materials or through routes using inorganic catalysts that yield high-quality ingredients whose organoleptic properties are indistinguishable from their natural counterparts, market trends demonstrate consumers will readily pay for more-expensive, natural analogs.

Many developing enzymatic and microbiological routes to aroma chemicals use biotechnology routes that are considered genetic modification (GM) and require food labels declaring them as such. Where ingredients are derived from genetically modified organisms (GMOs), such as extractions from a genetically modified botanical, label requirements address the necessary disclosures to consumers.3 But what are the labeling requirements for ingredients like flavors produced using GMOs or enzymes from GMOs?

Highlight of some Label Requirements around the World

In the USA, labeling requirements from the USDA National Bioengineered Food Disclosure Standard4 focuses on the presence or potential presence of genetic material from GMOs. Here the regulation defines: modified through in vitro recombinant deoxyribonucleic acid (rDNA) techniques as bioengineered (BE) foods. Under this definition bioengineering can be considered a type of genetic modification. If the raw material is digested, fermented, or manipulated using GMOs or enzymes derived from GMOs, the resulting products are not considered bioengineered and therefore do not require a biotechnology disclosure, so long as the raw material is not a BE source. For example, where BE yeast is used to ferment glucose to produce valencene, the resulting aroma chemical is not considered bioengineered if the glucose is from a non-BE source and the BE yeast is not present in the final product in detectable amounts. In fact, detectability is key to the USA labeling requirement. If no BE-genetic material is detectable in the flavor then a BE label declaration is not required, even if the raw material source was from a bioengineered organism.

Similar to the USA, the EU does not consider the use of GMOs in processing, such as using GM yeast to produce a flavor, a requirement for GM labeling, so long as the GMO is not present in the flavor.5 The EU, in fact, will allow up to 0.9% if the presence of that GMO is unavoidable or unintended.6 If the source material is a GMO source, however, the aroma chemicals require GM labeling even if no genetic material is presence. So, glucose from GM corn is always considered GM regardless of the presence or absence of genetic material. However, if non-GM corn is processed into glucose using GM yeast, and no detectable yeast is present in the glucose, that glucose is not considered GM and does not require GM labeling. In the case of valencene and nootkatone produced form the fermentation of glucose using GMO yeast, the GM labeling depends on the glucose source. If the glucose is from a GM source, the flavor ingredients are GM and must be labeled as such. If the glucose is non-GM then so are the aroma chemicals, even when using GMO-yeast.

Japan restricts the introduction of genetically engineered (GE) crops into the Japanese market. The Japanese authorities approve only 8 crops and 33 ingredients from those crops and on the market.7 The food resulting from those crops and markets must be labeled as containing GE-derived ingredients, but only if that ingredient is one of the top three ingredients in the food product or if the GE-ingredient comprises ≥5% of the food by weight. Since flavors are used in quantities much lower than this threshold, they will not require GE labeling on food.

Australian GM labeling requirements, like the USA, are based on the potential presence of genetic material.8 Highly processed foods where genetic materials are removed do not require GM labeling. Therefore, a flavor using nootkatone would not require a GM declaration, even if it was extracted directly from a GM source, so long as no genetic material is present. Similarly, if a GMO is used to produce the flavor and the GMO is not present in the flavor, GM labeling is not required. Since flavors are typically used in very small quantities, the Food Standards of Australia and New Zealand (FSANZ) does not require the food product to carry a GM label if the GM flavoring substance is present in the final food at ≤0.1%.

There is no GM food labeling requirement in Canada, but there is voluntary method of product labeling rules.9 In Canada if a firm would want to declare a product or ingredient is not produced from genetic engineering (GE), the food should only come from sources where <5% of that ingredient is available from GE sources. Similarly, if a claim is made that an ingredient is GE, >5% of the ingredient are available as GM.

Brazil requires that ingredients produced from GMOs must be declared on the product label when that ingredient is presenting in quantities >1%.10 In those cases, the food must be labeled as “contains transgenic (ingredient name)” or “produced from transgenic (source name).” Interestingly, a food can only be declared as GMO-free if there are GM varieties available on the Brazilian market and the food can be demonstrated to come from a non-GM source.

The flavors and fragrances market has considerable demand for competitively priced natural flavors in reliable supply. Biotechnology helps to meet this growing, global demand, but biotechnology relies on genetic engineering which may require label declarations. Some regions, like Argentina or Canada do not require any labels related to biotechnology, although Canada establishes rules for voluntary declarations. Other regions may require labeling of ingredients derived from biotechnology, but the application to flavors is often quite limited. Flavors are used in very small quantities and do not contain genetic material, so they are often exempt from biotechnology labeling requirements. Even in regions like the EU where any ingredient derived from GMO sources must be declared on the food labels, flavors could be exempt if the raw material was non-GM processed using GMOs. There are exceptions, however, that may require a flavor to be declared as being “GM” or “bioengineered” depending on the local regulations. When considering aroma chemicals produced using biotechnology it is important to understand the labeling requirements in the regions where it will be marketed to ensure any required declarations are present.