RNAi is a useful tool for functional analysis of genes and developing a potential therapeutic strategy for various diseases. Unlike murine-based MMLV or MSCV retroviral systems, lentiviral-based particles permit efficient transduction and integration of a specific shRNA construct into differentiated and non-dividing cells.1 While incubation of lentivirus pseudotyped with G glycoprotein from vesicular stomatitis virus (VSV-G) and cells in the presence of polybrene can efficiently serve as the method of transduction for many cell types, some cells are more difficult to transduce. Therefore, modifications have been made to transduction protocols for hard-to-transduce lines, such as T-cells, to facilitate binding of viral envelope protein to cells. Some of these modifications include spinoculation,2 magnetic transduction (see MISSION® ExpressMag® product line), transduction of cells on fibronectin-coated plates,3 and incubation of cells with concentrated viral particles4 (greater than or equal to 108 TU/ mL). The following is a spinoculation protocol that was successful in the transduction of VSV-G pseudotyped lentivirus in Jurkat cells. The protocol was performed in parallel with an overnight incubation of virus with cells in the presence of polybrene and with transductions conducted on fibronection-coated plates.

Multiplicity of infections (MOIs) of 0.1, 0.5, 1.0, 5.0, and 10.0 using MISSION® TurboGFP™ Control Transduction Particles (Product No. SHC003V) were added to 2 × 105 Jurkat cells in 2.0 mL of complete medium (RPMI 1640, 2 mM L-glutamine, 1.5 g/L sodium bicarbonate, 4.5 g/L glucose, 10 mM HEPES, 1.0 mM sodium pyruvate, 10% fetal bovine serum) for the three methods of transduction tested. Cells were centrifuged at 800 × g for 30 minutes at 32 ºC. Viruscontaining medium was aspirated, and pellets were dissociated by pipetting in 2.0 mL of complete medium for transductions via spinoculation. Cells were then plated in 6-well plates and incubated in a 37 ºC, 5% CO2 incubator overnight. Superfibronectin (Product No. S5171) stock solution was diluted in sterile PBS for a final concentration of 5 μg/mL, and 3.0 mL per well was added to each well of tissue-culture treated 6-well plates. Plates were then incubated at 37 ºC for 1.5 hours. Each well was rinsed twice with 2.0 mL complete medium before adding cells. Cells and viral particles were then plated in 6-well plates and incubated in a 37 ºC, 5% CO2 incubator overnight. Transductions conducted by the incubation of cells and virus were performed by adding viral particles to complete medium containing 8 μg/mL polybrene and cells. Each sample was mixed gently by pipetting. Cells and viral particles were plated in 6-well plates and incubated in a 37 ºC, 5% CO2 incubator overnight. After approximately 18 hours of incubation, all transduced cells were centrifuged, and medium was changed to fresh complete medium. Three days post-transduction, all samples were pelleted as described above and resuspended in fresh complete medium containing 2 μg/mL puromycin. Along with the transduced cultures, a non-transduced culture was seeded in puromycin-containing medium to serve as a control for judging when the transduced cultures emerged from selection. Cells were incubated overnight as described above. All samples were centrifuged as before and medium was changed with complete medium that contained 2 μg/mL puromycin. Cells were then incubated for an additional 48 hours until they completely emerged from selection as noted by cell death due to puromycin being no longer visible, and by the non-transduced well being completely dead. An aliquot of cells was added to an equal volume of trypan blue (0.4%) and cells were counted. Two counts were made for each sample and numbers were averaged.

In all three methods of transduction tested, cell viability as determined by trypan blue dye exclusion was greater than or equal to 98%. Furthermore, for all three methods of transduction tested, the number of cells surviving puromycin selection increased in a linear fashion as MOI was increased from 1 to 10. Spinoculation was the most effective method for transducing Jurkat cells (Figure 1), resulting in greater than half of the original plating density on day seven post-transduction. At lower MOIs, only minimal differences between the varied transduction methods can be observed. At higher MOIs, a more dramatic effect is seen with fibronection producing an approximately 50% increase in surviving cells over polybrene, while spinoculation generated approximately a five-fold increase in surviving cells over polybrene. 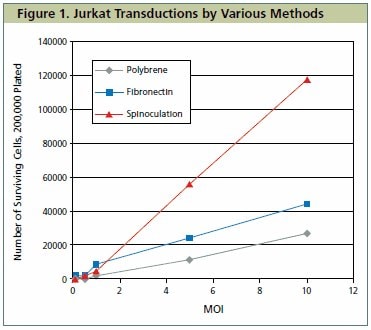 While spinoculation was shown to be the most efficient method of transduction for Jurkat cells, it is important to note that the method of transduction chosen by researchers will be cell-type dependent, and that one method may work well for a particular cell type but may be suboptimal for another. It should be noted that for the spinoculation method of transduction, the time of centrifugation and the g force used may be increased to potentially increase transduction efficiency2 in some cell types. To determine how easily a particular cell type is to transduce, one should begin with a range of MOIs using a control virus such as MISSION® Non-Target shRNA Control Transduction Particles (Product No. SHC002V), and incubate cells and virus in the presence of polybrene overnight. If transduction efficiency is low using this method, the transduction protocol modifications suggested above should be performed. All of the above methodologies facilitate the binding of viral envelope proteins to cells, the first step in transduction. Jurkat are a commonly used suspension cell line, and improved transduction protocols in this line will likely be expandable to other cell types. 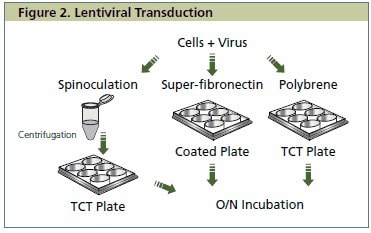