An internally developed CHO DNA sequence database containing over 60,000 total sequences and 9,000 annotated contigs was used to design the 4x 44K custom microarray platform (Agilent Technologies, SantaClara, CA). The average probe length is 60-bp, with a melting temperature (Tm) of 70 °C and a GC content of 45%. Each sequence has two probes designed to hybridize with different regions. In the instance that known genes were not represented in our sequence database, mouse orthologous gene sequences were used for probe design. This array platform was used in all 124 microarray studies.

A common RNA reference pool was created from an assortment of CHO lines and conditions in order todirectly compare across experiments. Dye-swap technical replicates were conducted as following: RNAsamples were labeled with Cy5 or Cy3 and hybridized against the common reference pool labeled with Cy3or Cy5, respectively.

The relative expression levels of each probe were normalized using the median fluorescence intensity of thereference pool in each dye-swap set. CHO-specific HKG candidates were selected using the following criteria. The coefficient of variation (% CV) was calculated using the expression value of each probe normalized with the median intensity of the reference pool. Each gene must have at least one microarray probe with a % CVbelow 29.21 % (25% percentile of all probes analyzed, (Figure 1). 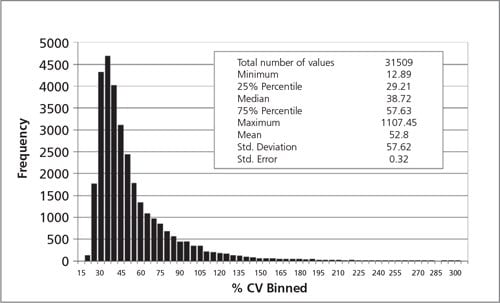 Figure 1.Depicts the distribution of the % CV values from the 31509 probes on 124 microarrays used for thepresent analysis. Quality control and background estimation probes on the microarray were excluded. The 25%percentile value is 29.21%, which was used for the primary cutoff for CHO HKG selection. The data points (n =232) with % CV greater than 300% were not shown on this histogram.

Primers were designed against sequences from the internal CHO DNA sequence database using Primer3 software (http://fokker.wi.mit.edu/primer3/input.htm). The primers were 18–25 base pairs (bp) with Tm of64–65 °C. The amplicons were between 156–249 bp (Table 2). All amplification efficiencies were calculated based on at least 4 dilution points and within a range of 90%–112%.A minimum of ten experimental conditions were randomly selected for qRT-PCR validation, with biological duplicates from the microarray experiments pooled for RT reactions. qRT-PCR was performed on a MX3000 Pthermocycler (Stratagene, La Jolla, CA) in triplicate for each experimental condition, with threshold cyclevalues (Ct) averaged from the triplicates. Reactions were run with SYBR Green Jumpstart™ Taq ReadyMix™ (Sigma-Aldrich, S4438) mixed with 1 mL of cDNA prepared from 25 ng/mL RNA and primers at 500 nM in areaction volume of 20 mL.