Whole genome amplification from a single cell is now possible with our optimized GenomePlex® Single Cell Whole Genome Amplification Kit (WGA4). The single cell procedure differs very little from the previously described GenomePlex® system, but for three procedural changes: (1) the kit includes a robust, optimized cell lysis protocol that is incorporated into the fragmentation steps; (2) the primers that have been optimized for increased sensitivity; and (3) the number of cycles have been increased to account for the minute amount of starting template. Single cells can be isolated by fluorescence-activated cell sorting (FACS), laser capture microdisection, dilution or any other applicable method. Single Cell WGA has been successfully applied to single cell Comparative Genome Hybridization, STR analysis of amniocentesis samples and genomic analysis of in vitro fertilized embryos, comparative genomic hybridization, etc.1,2

The single cell WGA process is divided into lysis & fragmentation, OmniPlex library generation, and PCR amplification. These steps should be carried out sequentially without pause, as storage between steps may allow the ends of the library DNA to degrade. Such degradation will affect subsequent steps. The final WGA DNA should be stored at –20 °C and is as stable as any comparably stored genomic DNA sample.

We recommend that all experiments should be performed along with a positive control DNA sample, such as the Control Human Genomic DNA, Catalog Number D7192, included in this kit.

1. Isolate a single cell into a PCR-ready vessel using laser capture micro-dissection, cell sorting, or other method. If sorted, the buffer should be of low ionic strength, such as Tris EDTA (TE) buffer, and in the minimal sort volume.
2. Add a sufficient volume of water to the single cell sample for a final volume of 9 µL.
3. Prepare a working Lysis and Fragmentation Buffer Solution by adding 2 µL of Proteinase K Solution (P4850) into 32 µL of the 10x Single Cell Lysis & Fragmentation Buffer. Vortex thoroughly.
4. Add 1 µL of the freshly prepared Proteinase K Solution-10x Single Cell Lysis & Fragmentation Buffer to the single cell sample. Mix thoroughly.
5. Incubate DNA mix at 50 °C for 1 hour, then heat to 99 °C for EXACTLY four minutes. Note that the incubation is very time sensitive. Any deviation may alter results. Cool on ice. Spin down sample prior to proceeding to Library Preparation.

12. Remove samples from thermal cycler and centrifuge briefly. Samples may be amplified immediately or stored at –20 °C for three days.

After cycling is complete, maintain the reactions at 4 °C or store at –20 °C until ready for analysis or purification. The stability of WGA DNA is equivalent to genomic DNA stored under the same conditions. 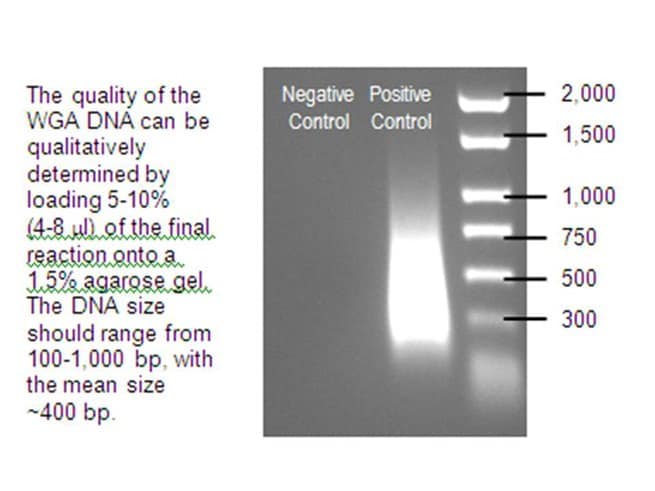 Purification of the final product is recommended before being used in subsequent applications. GenomePlex® WGA amplified DNA may be purified with the GenElute™ PCR Cleanup Kit, Catalog Number NA1020, or standard purification methods that isolate single and double stranded DNAs. Once purified, the DNA can be quantified by measuring absorbance, assuming that 1 A260 unit is equivalent to 50 ng/µL DNA. Measurement techniques such as PicoGreen® dye will often underestimate the actual WGA DNA yield, since single stranded DNA might be generated during amplification.

All lots are functionally tested by the amplification of a 100 pg sample of standard human genomic DNA that must yield 4 µg of product. The quality and representation of amplification is determined by real-time PCR using primer sets for eight separate loci. Negative (no template) controls must yield no detectable product

1. How does GenomePlex® work?
Genomic DNA is randomly fragmented and the resulting product is manipulated to attach a common sequence at each DNA end. This library of fragments is amplified using twenty-five rounds of PCR.

2. What if fragmentation (99 °C step) is allowed to proceed for less or more than four minutes?
The four-minute fragmentation time was found to give optimal results over a wide variety of DNA samples. Too little or no fragmentation will afford low yields and poor gene representation in the resulting WGA product. A ten-minute fragmentation step will also give poor WGA yields in almost all cases because a significant fraction of the DNA is now too small or degraded to allow efficient library production.

3. What is the average size of fragmented DNA?
The mean size after the fragmentation step is ~0.4kb.

4. Will the GenomePlex® process afford product with a negative control (no input DNA)?
No product will be generated without input of DNA if the procedure is performed correctly.

5. How should WGA DNA be purified? Is there a preferred way to quantify GenomePlex® DNA?
We recommend purifying GenomePlex® DNA using the PCR cleanup kit (Catalog Number NA1020) before it is used in any downstream process. Once purified, the DNA can be quantified by measuring absorbance, assuming that 1 A260 unit is equivalent to 50 ng/µL DNA. Measurement techniques such as PicoGreen® will often underestimate the actual WGA DNA yield, since single stranded DNA might be generated during amplification.

6. How can I store GenomePlex® DNA? Where can I stop during the GenomePlex® process? The WGA process can be divided into single cell lysis/fragmentation, generation of the OmniPlex® library, and PCR amplification. Fragmented DNA should be processed immediately, as the ends of this DNA can degrade and will affect subsequent steps. OmniPlex library DNA, generated in the stepped isothermal reactions, can be stored up to three days at –20 °C without any detectable differences to the process. The final WGA DNA should be stored at –20 °C and is as stable as any comparably stored genomic DNA sample.

Use of this product is covered by one or more of the following US patents and corresponding patent claims outside the US: 5,789,224, 5,618,711, 6,127,155 and claims outside the US corresponding to expired US Patent No. 5,079,352. The purchase of this product includes a limited, non-transferable immunity from suit under the foregoing patent claims for using only this amount of product for the purchaser’s own internal research. No right under any other patent claim, no right to perform any patented method, and no right to perform commercial services of any kind, including without limitation reporting the results of purchaser's activities for a fee or other commercial consideration, is conveyed expressly, by implication, or by estoppel. This product is for research use only. Diagnostic uses under Roche patents require a separate license from Roche. Further information on purchasing licenses may be obtained by contacting the Director of Licensing, Applied Biosystems, 850 Lincoln Centre Drive, Foster City, California 94404, USA.