The Need for Subcellular Localization Studies

One major rationale for investigating the subcellular location of a specific protein is that location is often tightly connected to function. For example, proteins locating to the nucleus are frequently implicated in gene regulation, proteins in mitochondria with energy production and Golgi-related proteins are often associated with protein modification and sorting. In addition to elucidating functional characteristics of proteins, subcellular location information can also facilitate protein interaction studies. For two proteins to interact, it is a prerequisite that they locate to the same defined site. Thus, knowing the subcellular location of a protein is a key step towards understanding function and probable interaction partners of this protein.

The Human Protein Atlas (HPA) project (proteinatlas.org) was established in 2003 to allow for a systematic genome-based exploration of the human proteome using antibody-based proteomics1. This is accomplished by combining high-throughput generation of Prestige Antibodies® with protein profiling in a multitude of human tissues and cells. Due to the difficulty to acquire spatial information on a fine subcellular level using immunohistochemistry, expression profiling has expanded to analysis with confocal microscopy using fluorescently labeled antibodies2,3. Each year protein expression and localization data for approximately 2,500 new proteins are added to the portal. By 2015, a first draft of the spatial expression profile of the human proteome will be completed.

Immunofluorescence (IF) Analysis in the Human Protein Atlas

Aiming at the goal for a subcellular protein atlas, confocal microscopy was selected as imaging system to achieve the highest spatial resolution possible at a reasonable throughput. Three human cell lines were selected for the approach; U-251 MG (glioma), U-2 OS (osteosarcoma) and A-431 (epithelial carcinoma), as well as three reference markers; DAPI staining nucleus and antibodies staining microtubules (anti-tubulin) and the endoplasmic reticulum (anti-calreticulin). The markers serve as controls for sample fixation, permeabilization and immunostaining4, as well as guides in the image annotation for assignment of subcellular location. Starting from year 2012, the cell line panel has been expanded to include another eight different cell lines. For each antibody two suitable cell lines from the cell line panel are now selected for the immunofluorescent analysis, based on RNA sequencing data. The third cell line chosen for each antibody is always U-2 OS, in order to localize the whole human proteome on a subcellular level in one cell line.

Antibody dilution and immunostaining procedures are automated and confocal microscopy images are aquired and annotated manually and compared to literature. There are 16 different subcellular locations being annotated (Figure 1) and the staining is further analyzed by scoring intensity on a four-graded scale and assigned staining characteristics. 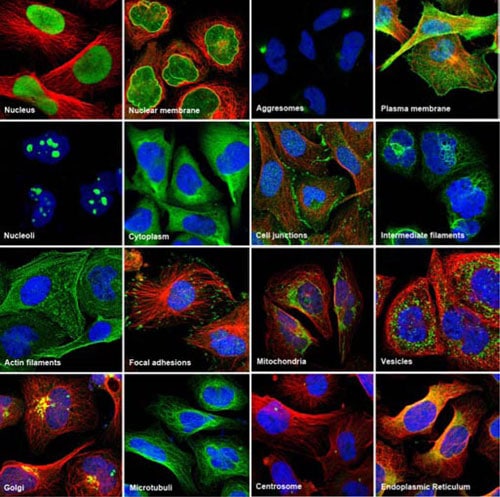 On the Human Protein Atlas portal, two images, each containing 6-12 cells, are shown for each Prestige Antibody® and cell line. The images are clickable for higher resolution. In addition, three different channels are clickable for visualization of the three markers in blue, red and yellow colors. Antibody staining is shown in green (Figure 3). Figure 3.Anti-ZYX (HPA004835) shows staining of focal adhesions in A-431 cells. By clicking on the different channels, the images can be visualized with one or several reference markers. A) antibody staining shown in green, B) addition of DAPI nuclear reference in blue, C) addition of microtubules reference in red and D) addition of endoplasmic reticulum (ER) reference in yellow.

A validation score of the observed staining is assigned for each cell line and is classified as either Supportive, Uncertain or Not Supportive based on concordance with available experimental gene/protein characterization data in the UniProtKB/Swiss-Prot database. Approximately 30% of the antibodies are scored as Supportive, i.e. agree with available subcellular localization information. For 60% of the genes with assigned subcellular positions, sufficient literature is missing as reference and the antibody results are thus scored as Uncertain.