Samples for chromatographic purification should be clear and free from particulate matter. Simple steps to clarify a sample before beginning purification will avoid clogging the column, may reduce the need for stringent washing procedures and can extend the life of the chromatographic medium.

Sample extraction procedures and the selection of buffers, additives and detergents are determined largely by the source of the material, the stability of the target molecule, the chromatographic techniques that will be employed and the intended use of the product. These subjects are dealt with in general terms in the Protein Purification Handbook and more specifically according to target molecule in the Recombinant Protein Handbook, Protein Amplification and Simple Purification and Antibody Purification Handbook, available from Cytiva.

In the majority of cases, biological activity needs to be retained after purification. Retaining the activity of the target molecule is also an advantage when following the progress of the purification, since detection of the target molecule often relies on its biological activity. Denaturation of sample components often leads to precipitation or enhanced non-specific adsorption, both of which will impair column function. Hence there are many advantages to checking the stability limits of the sample and working within these limits during purification.

Proteins generally contain a high degree of tertiary structure, kept together by van der Waals' forces, ionic and hydrophobic interactions and hydrogen bonding. Any conditions capable of destabilizing these forces may cause denaturation and/or precipitation. By contrast, peptides contain a low degree of tertiary structure. Their native state is dominated by secondary structures, stabilized mainly by hydrogen bonding. For this reason, peptides tolerate a much wider range of conditions than proteins. This basic difference in native structures is also reflected in that proteins are not easily renatured, while peptides often renature spontaneously.

It is advisable to perform stability tests before beginning to develop a purification protocol. The list below may be used as a basis for such testing:

Centrifugation and filtration are standard laboratory techniques for sample clarification and are used routinely when handling small samples.

It is highly recommended to centrifuge and filter any sample immediately before chromatographicpurification.

Centrifugation removes lipids and particulate matter, such as cell debris. If the sample is still not clear after centrifugation, use filter paper or a 5 μm filter as a first step and one of the filters below as a second step filter.

Filtration removes particulate matter. Membrane filters that give the least amount of nonspecific binding of proteins are composed of cellulose acetate or PVDF.

For sample preparation before chromatography, select a filter pore size in relation to the bead size of the chromatographic medium.

Desalting columns are suitable for any sample volume and will rapidly remove low molecular weight contaminants in a single step at the same time as transferring the sample into the correct buffer conditions. Centrifugation and/or filtration of the sample before desalting is still recommended. Detailed procedures for buffer exchange and desalting are given on page 156.

At laboratory scale, when samples are reasonably clean after filtration or centrifugation, the buffer exchange and desalting step can be avoided. For affinity chromatography or hydrophobic interaction chromatography, it may be sufficient to adjust the pH of the sample and, if necessary, dilute to reduce the ionic strength of the solution.

Rapidly process small or large sample volumes. Use before and/or between purification steps, if needed (remember that each extra step can reduce yield and desalting also dilutes the sample).

Specific sample preparation steps may be required if the crude sample is known to contain contamininants such as lipids, lipoproteins or phenol red that may build up on a column or if certain gross impurities, such as bulk protein, should be removed before any chromatographic step.

Fractional precipitation is frequently used at laboratory scale to remove gross impurities from small sample volumes, and occasionally used in small-scale commercial production. Precipitation techniques separate fractions by the principle of differential solubility. Because protein species differ in their degree of hydrophobicity, increased salt concentrations can enhance hydrophobic interactions between the proteins and cause precipitation. Fractional precipitation can be applied to remove gross impurities in three different ways, as shown in Figure 89.

Figure 89. Three ways to use precipitation.

Examples of precipitation agents are reviewed in Table 15. The most common precipitation method using ammonium sulphate is described in more detail.

Some proteins may be damaged by ammonium sulphate. Take care when adding crystalline ammonium sulphate: high local concentrations may cause contamination of the precipitate with unwanted proteins.

For routine, reproducible purification, precipitation with ammonium sulphate should be avoided in favor of chromatography.

The quantity of ammonium sulphate required to reach a given degree of saturation varies according to temperature. Table 16 shows the quantities required at +20 °C.

Table 16. Quantities of ammonium sulphate required to reach given degrees of saturation at +20 °C.

Many proteins are easily resolubilized in a small amount of the buffer to be used in the next chromatographic step. However, a denaturing agent may be required for less soluble proteins. Specific conditions will depend upon the specific protein. These agents must always be removed to allow complete refolding of the protein and to maximize recovery of mass and activity. A chromatographic step often removes a denaturant during purification. Table 17 gives examples of common denaturing agents.

Dialysis is frequently mentioned in the literature as a technique to remove salt or other small molecules and to exchange the buffer composition of a sample. However, dialysis is generally a very slow technique, requiring large volumes of buffer. During handling or as a result of proteolytic breakdown or non-specific binding to the dialysis membranes, there is a risk of losing material. A simpler and much faster technique is to use a desalting column, packed with Sephadex G-25, to perform a group separation between high and low molecular weight substances. Proteins are separated from salts and other small molecules.

In a fast, single step, the sample is desalted, transferred into a new buffer and low molecular weight materials are removed.

Desalting columns are used not only to remove low molecular weight contaminants, such as salt, but also for buffer exchange before or after different chromatographic steps and for the rapid removal of reagents to terminate a reaction.

Sample volumes up to 30% of the total volume of the desalting column can be processed. Sample concentration does not influence the separation as long as the concentration of proteins does not exceed 70 mg/mL when using normal aqueous buffers. The sample should be fully dissolved. Centrifuge or filter to remove particulate material.

For small sample volumes it may be possible to dilute the sample with the start buffer that is to be used for chromatographic purification, but cell debris and particulate matter must still be removed.

To prevent possible ionic interactions the presence of a low salt concentration (25 mM NaCl) is recommended during desalting and in the final sample buffer.

Figure 90 shows a typical buffer exchange and desalting separation. The process can be monitored by following changes in UV absorption and conductivity. 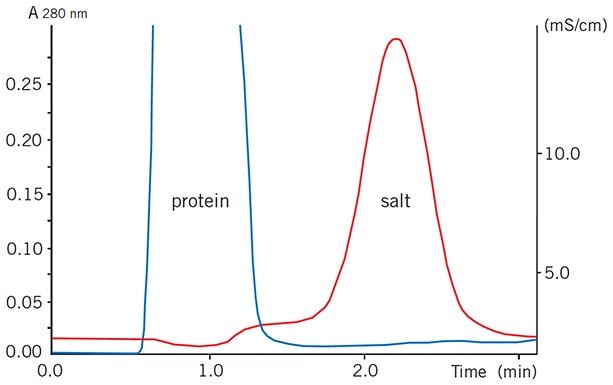 For laboratory scale operations, Table 18 shows a selection guide for prepacked, ready to use desalting and buffer exchange columns.

Instructions are supplied with each column. Desalting and buffer exchange can take less than 5 minutes per sample with greater than 95% recovery for most proteins.

Note: 5 mL/min corresponds to approximately 120 drops/min when using a HiTrap® 5 mL column. A simple peristaltic pump can also be used to apply sample and buffers.

A simple peristaltic pump can also be used to apply sample and buffers. 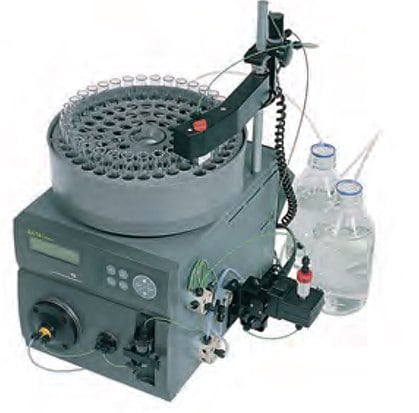 Prepare at least 500 mL of the required buffer.

Figure 91. Desalting of a (His)6 fusion protein on ÄKTAprime™.

Lipoproteins and other lipid material can rapidly clog chromatography columns and it is advisable to remove them before beginning purification. Precipitation agents such as dextran sulphate and polyvinylpyrrolidine, described under Fractional precipitation, are recommended to remove high levels of lipoproteins from samples such as ascitic fluid.

Centrifuge samples to avoid the risk of non-specific binding of the target molecule to a filter.

Samples such as serum can be filtered through glass wool to remove remaining lipids.

Phenol red is frequently used at laboratory scale as a pH indicator in cell culture. Although not directly interfering with purification, phenol red may bind to certain purification media and should be removed as early as possible to avoid the risk of contamination. It is known to bind to anion exchange media at pH > 7.

Use a desalting column to simultaneously remove phenol red (a low molecular weight molecule) and transfer sample to the correct buffer conditions for further purification, as described under Buffer exchange and desalting.

If samples contain a high level of low molecular weight contaminants, use a desalting column before the first chromatographic purification step, as described under Buffer exchange and desalting.