The following was generated with the assistance of an outside source using Sigma-Aldrich products. Technical content was generated and provided by:
S. Rodríguez-Sáncheza, P. Galindo-Iranzob, A.C. Soriaa, M.L. Sanza, J.E. Quintanilla-Lópeza, and R. Lebrón-Aguilarb

While monocationic ionic liquids can be employed for industrial applications, it was discovered that dicationic and polycationic ionic liquids make suitable GC stationary phases[1]. Currently, there are seven different commercialized capillary GC columns which use ionic liquid stationary phases. Their main advantage is that they offer different separation properties compared to columns prepared with polysiloxane polymer and polyethylene glycol stationary phases. They also exhibit lower column bleed, higher thermal stability, greater resistance to damage from moisture and oxygen, and longer life time when compared to columns of similar polarity.

In contrast, the solvation parameter model (SPM) can quantitatively evaluate the individual intermolecular interactions between a substance and the stationary phase[3]. Used for many years to characterize HPLC phases, the SPM is also applicable for characterizing GC stationary phases[4-6]. This model is described for GC by the Abraham equation:

In order to cover a broad range of possible solute-stationary phase interactions, 95 solutes with varied functional groups were selected to perform stationary phase characterization by the SPM. The group of columns included seven ionic liquid columns and 45 non-ionic liquid columns. The solutes selected were grouped into different mixtures, and then chromatographed isothermally at several temperatures to obtain their k values. The following were then generated:

Additional details of the experimental design, the table of system constants and further discussion, several radar plots and discussion, and the 3D PCA plot can be found in reference 8.

PCA is a statistical procedure that rotates and transforms the original axes, each representing an original variable (system constants in our case), into new axes called principal components (PCs) that are linear combinations of the original variables and account for most of the variance in the data. PCA can reveal those variables, or combination of variables, which describe some inherent structure in the data and these may be interpreted in chemical or physicochemical terms[9].

The 3D score plot shown in Figure 1 is an update of a plot previously reported[8]. The update is the inclusion of data for three additional ionic liquid columns. As shown, the first three principal components explain 99.2% of the variance, representing the whole column selectivity space quite well. Principal components 1 and 2 take into account contributions from the a and s system constants, while principal component 3 is mainly related to the b and e system constants. Dashed lines indicate the distribution trend of polysiloxane polymer stationary phases substituted with trifluoropropyl (line 1), phenyl (line 2), and cyanopropyl (line 3) groups. There are two other clearly differentiated groups, corresponding to polyethylene glycol (cluster I) and ionic liquid (cluster II) stationary phases. 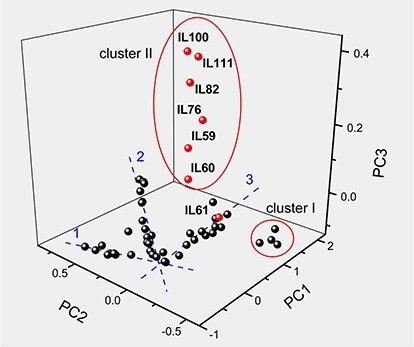 The solvation characteristics of the SLB®-IL61 column were found to be more similar to cyanopropyl substituted polysiloxane polymer phases (line 3) than to the other ionic liquid phases (cluster II). This is due to the trifluoromethylsulfonate anion incorporated as part of the phase, which decreases the hydrogen-bond acidity of the column.

One of the most outstanding characteristics observed for the ionic liquid stationary phases was the non-zero value for the b system constant (hydrogen-bond acidity). This inherent acidity contributes toward imparting distinct selectivity to these phases. This is clearly shown by principal component analysis. However, it should be noted that they also present a low inertness to compounds with a high capability to interact through hydrogen-bonding, often observed as poor peak shapes. This makes it difficult to use these columns to quantify low levels of such compounds.

In this work, seven commercial capillary columns that utilize ionic liquid stationary phases were thoroughly studied in order to better understand their retention mechanisms. According to the SPM results, dipole-type interactions (s) and hydrogen-bond basicity interactions (a) were the dominant contributions to retention, hydrogen-bond acidity interactions (b) were moderate, and π–π and n–π interactions (e) were barely significant. It was also revealed they provide a low separation for members of a homologous series, defined as overall dispersive-type (l) interactions.

A 3D PCA plot visually showed that ionic liquid columns fill an empty area of the available selectivity space, which should clearly enhance the separation capacity of the GC technique. It is believed that as a result of the different retention mechanisms involved, the ionic liquid columns studied are highly versatile and have a noteworthy capacity to resolve complex mixtures.

SLB is a registered trademark of Sigma-Aldrich Co. LLC