Guidelines for Transferring a C18 Method to Discovery HS F5

Generally, bases are longer retained on the HS F5 than on a C18. Increasing the organic content of a C18 separation 5 to 10 percent will generally provide similar retention on a HS F5. Results with other compounds are highly variable. However, it is generally true that solutes with logPo/w values less than 2.5 will be retained longer on HS F5 compared to a C18. The degree of difference is highly solute dependent.

The Discovery HS F5 shows greater retention (Table 1), versus C18, of the multifunctional compounds shown in these chromatograms. Compounds that elute too closely to the void volume (peak 1) on C18 columns are sufficiently retained by Discovery HS F5 (Table 2).

Discovery HS F5, a unique, functionalized reversed-phase uncovers a trace impurity in quinidine missed by C18. Neat quinidine was assayed on C18 under a variety of mobile phase conditions (Table 3). Conditions C and D produced a single peak suggesting the quinidine was pure. The peak resulting from condition B might be showing partially resolved front shoulder. A quick screen of % organic was unable to resolve the possible impurity. On the HS F5 (chromatogram A), the impurity is clearly resolved. During method development a quick screen using unique, functionalized reversed-phases such as Discovery HS F5, greatly increases the chances of finding trace impurities early, before they can cause potentially large problems.

In Table 4, cytidine and related compounds provide another example of the power of HS F5 to provide unique and valuable separations compared to a C18. An added benefit of the HS F5 is its resistance to phase collapse under 100% aqueous conditions. 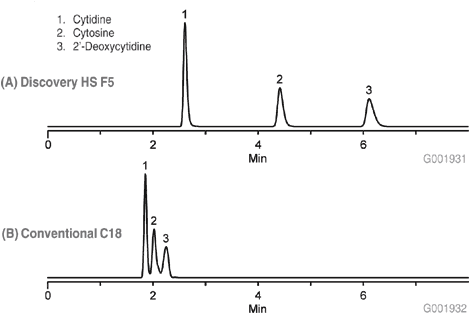 The Discovery HS F5 shows low acceptable bleed after three conditioning cycles as verified by an independent testing laboratory (1). The data shows the averaged mass spectra obtained from the designated (shaded) regions of the total ion chromatogram (Figure 5). A blank was also run, that is, the same conditions used with the column in-line were run after removing the column and replacing it with a zero dead volume union.

The X’s on each mass spectrum indicate the mass found both in the blank run and in the run containing the column. Note that many of the major masses are accounted for in the blank when comparing it when the column was installed. This indicates low, acceptable bleed coming from the Discovery HS F5 phase. 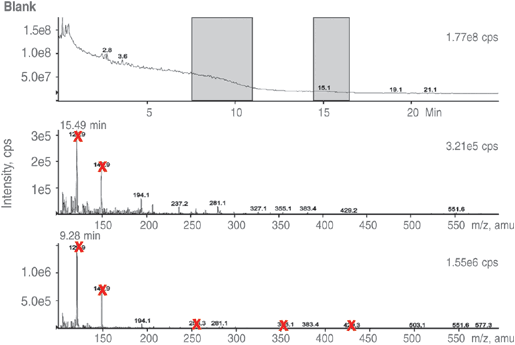 An important factor for developing a robust analytical method is column reproducibility. Column selectivity should remain the same and the elution patterns of the proteins or peptides must be reproducible. Consistency in silica and bonded phase chemistry guarantees that Discovery columns have exceptional reproducibility between injections, columns, and bonded phase lots (Tables 6 and 7). 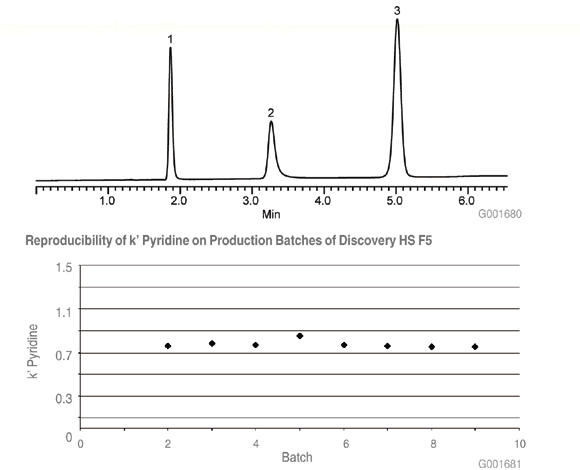 Scale-Up to Preparative; Scale-Down to High Speed or Narrowbore Separations

Bonded phase and silica chemistry are uniform across all Discovery particle sizes.

Precious samples can be wasted during scale-up if the analytical and preparative columns do not give the same elution pattern.