Selection Process Development in a GS Knock-Out CHO Host Cell Line: The Effects of MSX Addition on Clones Generated in an MSX-Free Process

The Glutamine Synthetase (GS) expression system does not typically require multiple rounds of amplification to isolate high-producing clones (Brown, 1992). However, most Chinese Hamster Ovary (CHO) cell production lines contain endogenous GS, and Methionine Sulfoximine (MSX) is required to inhibit excess GS activity resulting from expression of the endogenous gene and achieve adequate selection. MSX is typically applied during stable pool generation, and is continued at the same concentration throughout the cloning process. A previous study indicates that increasing the concentration of MSX can result in gene amplification and increased productivity (June 2006). However, many of the amplified clones did not stably maintain their enhanced productivity even when cultured in the presence of high concentrations of MSX. Additionally, non-producing clones were shown to survive the amplification process.

Using Zinc Finger Nucleases (ZFNs), we have created a GS -/- host cell line, CHOZN®GS-/-. Since CHOZN®GS-/- lacks functional endogenous GS genes, MSX is not required for selection. We have shown that an MSX-free process can be employed to isolate high-producing clones using this host. The question remains, however, what effects the removal of endogenous GS has on potential amplification methods. In the present study we examine the effects of the addition of MSX to IgG-producing clones developed in an MSX-free process in terms of bulk titer, surface-bound protein expression and gene copy number.

Model IgG-producing stable pools were created using the CHOZN®GS -/- cell line (Figure 1), following the technical bulletin (SAFC). Two pools were single-cell cloned using limiting dilution, and 106 clones were evaluated. 7% of the clones achieved titers of more than 1g/L in a fed batch experiment. Nine high-producing clones were treated with MSX. Stability studies on these clones were carried out in the absence of MSX.

The nine IgG-producing clones were placed in media containing 25μM MSX and were cultured in TPP tubes. Following recovery (viability >97%), the MSX-treated clones were banked. During the MSX treatment, the clones were passaged to a VCD of 0.5e6cells/ml twice weekly.

Figure 2.Viability of 9 IgG-producing clones during MSX treatment. Clones are grouped according to changes in productivity post-treatment. 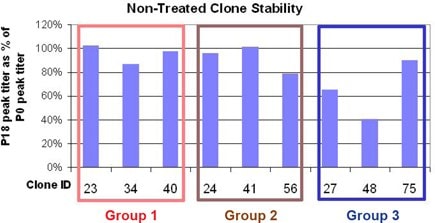 As shown in Figure 2, each clone responded differently to MSX addition in terms of growth. The minimum viability ranged from 46-92%, and the complete recovery time ranged from 17 to 27 days. No correlation was apparent between growth response to MSX addition and changes in peak titer, gene copy number or surface-bound IgG. For example, two clones that demonstrated the largest increase in volumetric productivity post-MSX treatment had the second lowest (Clone 40) and the highest (Clone 34) minimum viability.

In Group 1, all three clones showed a slight increase of surface-bound protein. In one clone, a second, non-producing population emerged post-amplification. In Group 2, one clone showed an increase in surface-bound IgG, but no significant change was observed in the other two clones. In Group 3 all clones showed a second population of non-producing cells that emerged post-amplification, which likely contributed to the decrease in volumetric productivity.

The two clones with the largest decrease in productivity after 18 passages also showed decreased titer after MSX treatment. The surface-bound protein levels for these two clones also show emergent populations of non-producing cells after MSX addition.