The causative agent of COVID-19, the SARS-CoV-2 virus is a positive-strand RNA virus that causes severe respiratory syndrome in humans. The mature SARS-CoV-2 contains 4 structural proteins:  Envelope (E), Membrane (M), Nucleocapsid (N), and the Spike protein (S). E and M proteins help in viral assembly and N protein is needed for RNA synthesis. Additionally, SARS-CoV-2 is reported to use the angiotensin converting enzyme 2 (ACE2) receptor for host cell entry along with the nuclear transport factor, known as importin. Please note that the recommended reagents mentioned here are for research use only and not for use in diagnostic procedures.

The S protein is responsible for virus binding and entry into host cells. The S precursor protein of SARS-CoV-2 is cleaved into S1 (685 amino acids) and S2 (588 amino acids) subunits. The S protein contains a furin cleavage site at the boundary between the S1/S2 subunits. It has been shown that SARS-CoV-2 virus employs transmembrane protease serine 2 (TMPRSS2) for S protein priming and it is speculated that furin-mediated cleavage at the S1/S2 site in infected cells may promote subsequent TMPRSS2-dependent entry into target cells. The S1 subunit has the receptor binding domain (RBD) that mediates entry of this virus into susceptible cells through the peptidase domain of host ACE2 with high affinity (Kd = 15 nM). The S2 protein, which is reported to be well-conserved and shows 99% identity with bat coronavirus, is responsible for membrane fusion. Proteolytic cleavage of the S glycoprotein is also considered an important factor that can determine if the virus can cross species. This cleavage step may present a target for blocking zoonotic coronavirus transmission. 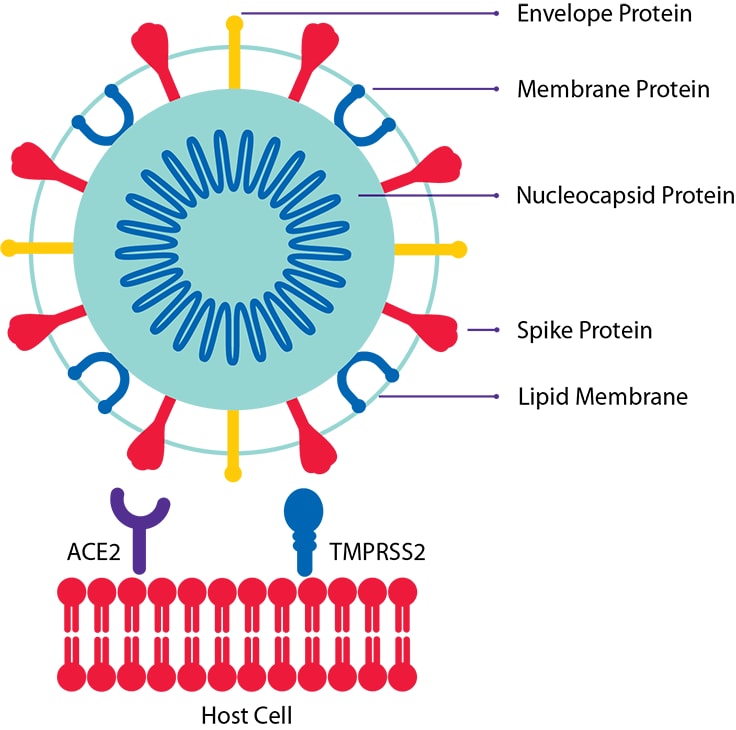 Furin is an ubiquitously-expressed enzyme that demonstrates endoprotease activity within secretory pathways and can cleave at the RX(K/R)R consensus motif. It is a single-pass type I membrane protein that shuttles between the trans-Golgi network and the cell surface. Furin is synthesized with a signal peptide of 26 amino acids and a propeptide region (aa 27-107) that inhibits its activity. The inhibition peptide plays the role of an intramolecular chaperone, is autocatalytically removed in the endoplasmic reticulum (ER) and remains non-covalently bound to furin as a potent auto-inhibitor. Propeptide cleavage is a prerequisite for exit of furin molecules from the endoplasmic reticulum. A second cleavage within the propeptide region occurs in the trans-Golgi network, followed by the release of the propeptide and the activation of furin. Its cytoplasmic domain (aa 739-794) is responsible for its trans-Golgi network localization and recycling from the cell surface.

ACE2: A Receptor for SARS-CoV-2

ACE and its homolog ACE2 belong to the ACE family of dipeptidyl carboxydipeptidases and are known to serve two opposing functions. ACE cleaves angiotensin I to generate angiotensin II that binds to the angiotensin receptor and leads to constriction of blood vessels and hypertension. By contrast, ACE2 is reported to inactivate angiotensin II while generating angiotensin 1–7, a heptapeptide with vasodilator function via activation of its Mas receptor1. 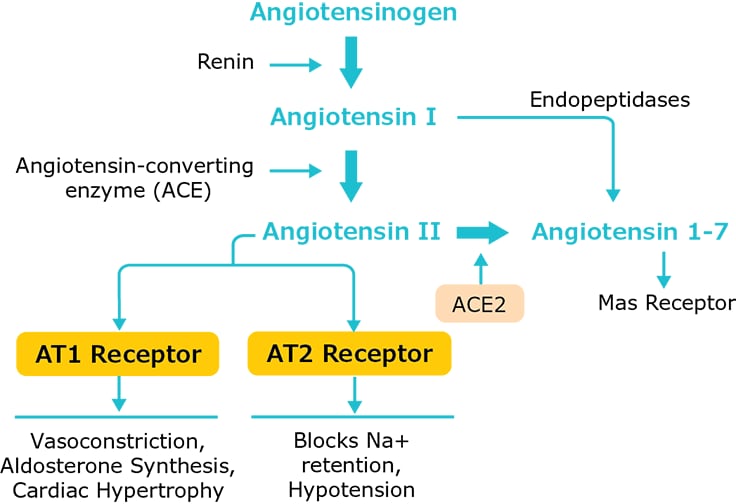 It has been reported that SARS-CoV-2 utilizes ACE2 as a receptor for entry into cells and the receptor binding domain (RBD) of SARS-CoV-2 displays strong interaction with human ACE2 molecules. High ACE2 expression is reported in type II alveolar cells, the esophagus, absorptive enterocytes of ileum and colon, and kidney proximal tubule cells2. These organs are considered at higher risk for SARS-CoV-2 infection. In animal models it has been shown that treatment with angiotensin converting enzyme inhibitors (ACEI) and angiotensin receptor blockers (ARBs) can increase the expression of ACE2 in various organs. It has been argued that although ACEI and ARBs are usually recommended for patients with cardiovascular and renal disorders, their use, particularly in the elderly, may increase the severity of SARS-CoV-2 infection symptoms3-5. 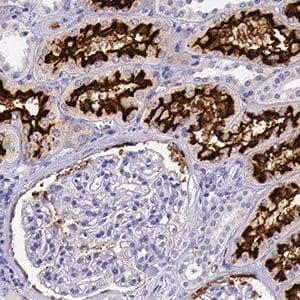 TMPRSS2 is a single-pass type II membrane protein of the peptidase S1 family that has been shown to cleave and activate the viral spike glycoproteins, which in turn facilitate virus-cell membrane attachment. It is shown to facilitate human SARS coronavirus (SARS-CoV) infection via two independent mechanisms: 1) proteolytic cleavage of ACE2 that promotes viral uptake and 2) cleavage of coronavirus spike glycoprotein, which activates the glycoprotein for cathepsin L-independent host cell entry. TMPRSS2 is highly expressed in prostate tissue with lower expression levels observed in the epithelia of the colon, stomach, epididymis, and breast tissue. Its expression levels are significantly elevated in both neoplastic prostate and in the epithelium of prostatic hyperplasia. TMPRSS2 has a cytoplasmic domain (aa 1-84), a transmembrane domain (aa 85-105), and an extracellular domain (aa 106-492). Its peptidase S1 domain is localized to amino acids 256-489. It is reported to be proteolytically processed by an autocatalytic mechanism generating the transmembrane protease serine 2 non-catalytic chain (aa 1-255) and the transmembrane protease serine 2 catalytic chain (aa 256-492).

Ivermectin: An in vitro Inhibitor of SARS-CoV-2 replication via Importin α/β1 Function

Trafficking between the nucleus and the cytoplasm occurs via the nuclear pore complexes (NPCs), which are large supramolecular assemblies of ~125 mDa and contain about 100 polypeptides embedded in the double-membrane nuclear envelope. The signal for import is provided by a polypeptide sequence in the encoded protein known as the nuclear localization signal (NLS). A number of nuclear transport receptors known as importins, transportins, and Ran-binding proteins recognize NLS and mediate “docking” at the nuclear pore.

Cargo proteins are imported by the carrier importin-β, which binds them through the adaptor protein importin-α. Importin-β interacts with the importin-β bound to the NLS and acts as a carrier of the NLS/importin-α/β trimer. Researchers have recently identified ivermectin, a macro-cyclic lactone derivative of avermectin with anti-parasitic properties, as an inhibitor of SARS-CoV-2 virus replication in vitro (IC50 = ~ 2.0 mM). Ivermectin binds to and destabilizes the importin α/β1 heterodimer, which prevents importin α/β1 from binding to the viral protein and blocks its entry into the nucleus 6-7.

For Research Use Only. Not for use in diagnostic procedures.

Unless otherwise stated in the Product(s) specifications, any Antibody product is sold for internal research use only and may not be used for any other purpose, which includes but is not limited to, any commercial, diagnostic, or therapeutic use. Our validation processes pertain only to research uses and do not confirm or assure that our antibodies can be used for any unauthorized uses as set forth herein.