Viable Air Samplers are used for quantitative determination of airborne contamination in cleanrooms and isolators. To maintain the cleanliness of the environment, the air flow should neither disturb the unidirectional air flow nor pose a contamination risk to the environment. As portable air samplers are sometimes moved and used in various environments with different levels of microbial contamination, there might be a risk of cross-contamination from higher to low contaminated environments. The MAS-100 NT® is equipped with a brushless motor which generates a minimal quantity of particles, so that no filter is required even for GMP Grade A usage. A H13 particle filter can be mounted at the exhaust air, when needed (Figure 1). The standard MAS-100 NT® air sampler was compared to a MAS-100 NT® equipped with a H13 filter. The particle emission under different environmental conditions was measured using an ACS Plus particle counter, which was directly mounted to the air outlet of the air sampler.

In Figure 2, the MAS-100 NT® sampler was positioned in a non-controlled reference environment, whereas in other configurations the instruments were placed beside the ACS Plus particle counter (KM Optoelektronik GmbH, Germany) in the cleanbench. 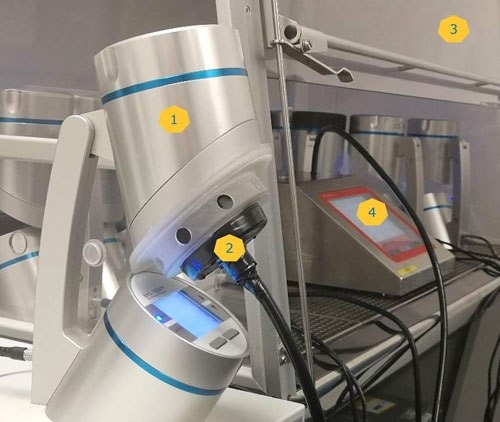 Once the test system was established, the following basic assumption was tested: Is there really a need for a filter to prevent the transfer of particle contamination between different environments?

A 1000 L air sample was collected with a MAS-100 NT® in the reference environment with or without filter. Thereafter, the instrument was transferred into the clean environment and started again. Particle counts were taken from the exhaust air at the outlet every 5 s. The test was repeated 5 times for both setups. In tests without filter we found a total of 126–296 particles in the first 5 seconds after starting the blower and between 0 and 3 particles for the second 5 seconds and no particles thereafter (Figure 3). A total of 1042 particles were detected between all 5 repetitions, about 12% of them larger than 1 µM. The data demonstrate that there is minimal transfer of particles between different environments. The fact that there were no particles detected after 10 seconds proves that the particles were not generated by the blower motor or other instrument components.

If the MAS-100 NT® was equipped with a HEPA air outlet filter 0–6 particles were counted in the first 5 seconds and 0 thereafter (Figure 3), all of them smaller than 1 µM. The filter dramatically reduced the transfer of particles and virtually eliminated the risk of them being CFU as those tend to be larger than 1 µM. Filtration efficiency of the complete assembly

For every test we took a reference sample by measuring the particle count of the exhaust air of a MAS-100 NT® sampler running in the reference environment. As the particle load was very high, we took 10 samples of 10 s each and extrapolated the particle count to 1000 L. This reference count was compared to a 1000 L sample taken from the identical MAS-100 NT® instrument with particle filter running in the same environment. Every 3 minutes, the particle count was recorded to assess if there was a trend. In all cases the filter assembly passed, and even exceeded, the required performance threshold (Table 1) for H13 filters. Throughout the 36 minutes (approx. 1 m3) sampling interval, no trend was evident for any filter (data not shown). The filter assembly therefore meets the need to protect an environment from carry-over of particles from another environment with lower particle rating.

For reference also the permissible particle concentrations of ISO Class 5 are given.

It is recommended to recalibrate a MAS-100 NT® system annually. Therefore, under normal usage a filter should be able to be used for a complete calibration interval. We assumed that 10 samples of 1000 L per day would be taken under intense usage for 300 days per year. This amounts to about 21 days permanent operation. Two MAS-100 NT® instruments with filter were run continuously for 21 days in the uncontrolled reference environment. From time to time, 1 m3 of the exhausted air were sampled for particles from both devices and compared to the reference sample taken immediately before or after without filter. The data in Table 2 shows that there was no detectable deterioration of filtration efficiency during this time. All filters met or exceeded H13 filter specification. In addition, there was no detectable filter clogging and airflow calibration remained within specification.

The MAS-100 NT® is a portable instrument which is designed for quantitative analysis of microbial contamination in air. The brushless motor does not generate particles which exceed the limits of a cleanroom ISO 5. This study investigated the need for filtration of the exhaust air, especially when air sampling with the same instrument is performed in environments with a range of contamination levels.