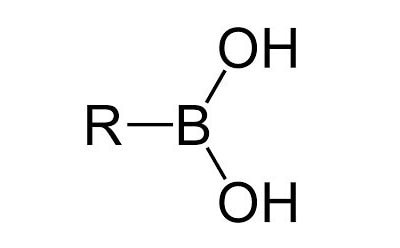 Boronic acids and boronic acid derivatives are important in organic synthesis and medicinal chemistry because of their versatility as synthetic intermediates in the preparation of complex molecules. We are pleased to provide a comprehensive portfolio of boronic acids for use in reactions, such as the powerful carbon-carbon bond-forming Suzuki–Miyaura palladium catalyzed cross-coupling reaction, the Stille coupling, Sonogashira coupling, Chan–Lam coupling, Lieberskind–Strogl coupling, conjugate additions, homologations, and electrophilic allyl shifts.

Boronic acids are also used in biological applications, for example for the inhibition of serine proteases. The Raines group has conducted profound research on pendant boronic acids enhancing the cytosolic delivery of a protein toxin, by forming boronate esters with the 1,2- and 1,3-diols of saccharides, such as those that coat the surface of mammalian cells.

Alkenyl and alkyl acids are substituted boric acids with a carbon-boron bond, denoted by R–B(OH)2. These Lewis acids are “green” compounds due to their low inherent toxicity and rapid environmental degradation. We offer high-quality alkyl and alkenyl acids for boronic acid derivative formation and other chemical synthesis applications.

A prominent feature of boronic acids is their reversible formation of esters with diols in aqueous solution. Boronate esters are air- and chromatography-stable and suitable for spectroscopic study. The Suzuki–Miyaura cross-coupling reaction can be used with boronate esters. An underlying problem, however, involves reaction scheme incompatibilities between most synthetic reagents. Boronic ester counterparts are often employed to counteract this incompatibility and are more compatible with many synthetic schemes, although liberation of the boronic acid requires harsh conditions that interfere with the synthetic substrates.

N-Methyliminodiacetic acid (MIDA)-protected boronate esters are a new class of reagents that offer great promise in iterative Suzuki–Miyaura cross-coupling reactions. Compared to earlier reagents, MIDA esters are easily handled, unreactive under anhydrous cross-coupling conditions, are benchtop-stable indefinitely under air, and can be deprotected easily using mild aqueous basic conditions. The success of this new class of reagents is tied to their unique molecular architectures. Compared to the simpler B–N-containing molecules ammonia borane and trimethylamine borane, MIDA esters are much larger, and the sp3 hybridized boron atom is secured by two five membered rings, dramatically increasing the stability of the boronic acid and allowing for the synthesis of complex molecules to take place.

Chiral α-aminoboronate esters, compounds having a tremendous scope of applications in pharmacology, can be synthesized via metal-free nucleophilic boryl addition to tosylaldimines. Boronate esters are utilized in organic electronic devices.

The Miyaura borylation reaction is a powerful tool for the synthesis of boronates via cross-coupling of borylation reagents with aryl and vinyl halides. Borylated products can easily be purified by chromatographic techniques and are air stable. Strong activation of the product may initiate the competing Suzuki coupling. Therefore, choosing an appropriate base is crucial for the success of the borylation reaction.

Most commonly, lithium or Grignard reagents are used in combination with an electrophilic source of boron to create C–B bonds. However, due to the highly nucleophilic and basic nature of the metal species in this two-step procedure, various functional groups are not well tolerated. The mild reaction conditions of the borylation reaction allow for the preparation of boronates which are not accessible via lithium or Grignard intermediates.

MIDA boronates represent a class of caged boronic acids and have proven exceptionally successful in iterative Suzuki–Miyaura cross-couplings. These boronic acid surrogates attenuate the transmetallation between the boronic acid and palladium species. However, deprotection is readily achieved at room temperature under mild aqueous basic conditions using either 1M NaOH, or even NaHCO3. Additionally, the MIDA boronates are remarkably robust when treated with various common harsh reagents (e.g. Jones Reagent) to transform the derivative with the MIDA component intact.

Potassium trifluoroborate salts (R-BF3K) are a versatile class of reagents and are effective surrogates to the extensively used organoborane reagents. The stability of trifluoroborate salts not only renders them suitable for extended storage, but their stoichiometry is easy to characterize, since they do not readily undergo trimerization, as happens with their boronic acid counterparts. Trifluoroborate salts are extensively employed in C–C bond formations (e.g., Suzuki–Miyaura cross-couplings) and are also stable under oxidative conditions and metal-halogen exchange, making them “protected boronic acids” in certain reaction media.