Ginkgo is one of the oldest medicinal plants on earth. Originally it comes from China but nowadays it is cultivated all over the world. The plant contains various flavonoids and terpenes, which are responsible for the positive properties of Ginkgo. The ingredients protect the cells in the human body and promote blood circulation. Ginkgo preparations are therefore used against various diseases, such as dementia, headaches, circulatory disorders and asthma.

3.0 µL of different standards and samples were applied on the plate as bands. After staining with the natural substance reagent according to Neu (1% 2-aminoethoxydiphenyl borate in methanol) and heating (5 minutes at 120 °C on a heat plate), a variety of flavonoids and additional substances became visible. Most of them are shown on the picture at a wavelength of 366 nm. At 254 nm the first tablet (track 6) shows a spot at the same position as the theobromine standard (track 2). A mass spectrometry (MS) analysis only reveals the existence of theobromine in the standard (track 2) theobromine. No theobromine is present in the first tablet (track 6). The first tablet displays the highest concentration of ingredients as compared to the Ginkgo powder amount and application volume of the other tablets. Tablets 1, 2 and 3 contain 500, 500 and 6.000 mg of dried Ginkgo leaf extract, respectively. The Ginkgo Biloba peak identification standard (track 10) shows a good separation of several flavonoids. Taken it as a fingerprint standard, the tablets and the tea contain nearly the same substances.

Before the plate was used for the separation, it was impregnated with a 5% sodium acetate solution (dissolved in ethanol / water 6:4) and dried at 120 °C. The standard was applied in a concentration series as bands together with the samples on one plate. After the chromatographic development, the plate was derivatized with acetic anhydride and heated at 180 °C for 10 minutes in order to make the terpenes visible under UV light. Then the spots were scanned at 320 nm and the peaks were integrated.

The results show that the tablets, which all appear similar in their look, contain different levels of flavonoids and terpenes. This means that manufacturers yield their Ginkgo leaves from different growing regions. Tablet 3 contains the highest level of terpenes as compared to the other two samples.

A HPTLC silica gel 60 F254 MS-grade plate was used for the TLC-MS experiments. For the analysis of terpene lactones the samples were eluted with the Camag TLC-MS Interface from the developed and underivatized plate and transferred to an ESI(-) Q-TOF-MS from Bruker.

The spectra clearly show mass peaks for bilobalide, ginkgolide A and ginkgolide B.

Tea and tablets were diluted in methanol / water (1:1) and sonicated. Subsequently the samples were filtered through a syringe filter and the filtrate was collected in small tubes. 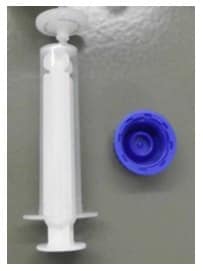 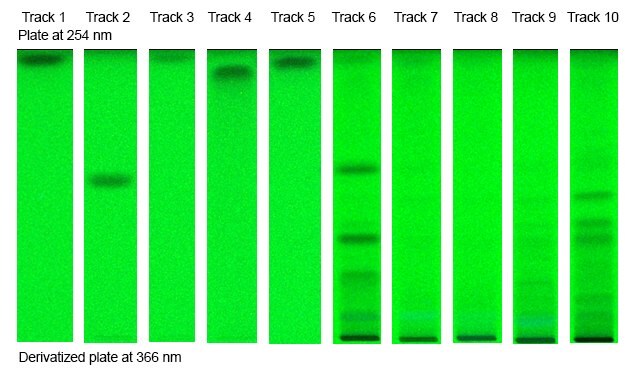 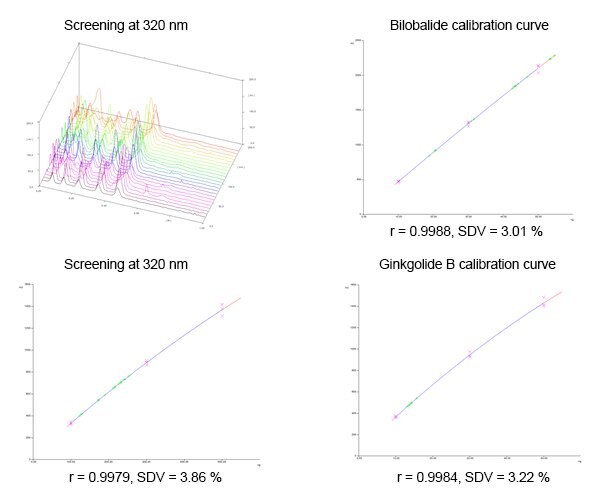