Rovis has demonstrated that triazolium salt (667080) in the presence of a base can act as an N-heterocyclic carbene organocatalyst1 in highly enantioselective intramolecular Stetter reactions.2 The Stetter reaction (conjugate addition of an aldehyde to an α,β-unsaturated compound) is a superb method for the construction of 1,4-dicarbonyl compounds bearing quaternary stereocenters (Scheme 1). 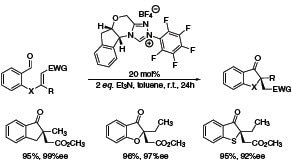 Beginning in 2004, Bode and co-workers extended the use of NHCs as organocatalysts by developing new approaches to the catalytic generation of reactive species including activated carboxylates, homoenolates, and enolates. Critical to the success of these processes is an N-mesityl substituent on an imidazolium or triazolium NHC precursor. These novel catalysts and reactions make possible a new generation of highly enantioselective annulations from simple starting materials under mild reaction conditions, usually at room temperature and without added reagents. For example, chiral (683973) catalyzes an inverseelectron demand Diels–Alder reaction of activated enals and α,β-unsaturated imines to afford cis-dihydropyridinones with outstanding selectivity (Scheme 2).3 The use of α-chloro aldehydes as starting materials is viable, and also makes possible enantioselective annulations with enones using less than 1 mol % of the chiral NHC catalysts (Scheme 3).4 These catalysts promote highly enantioselective cyclopentene-forming annulations of simple enals and activated enones (Scheme 4).5 Achiral catalyst (688487) is also useful for redox esterifications and amidations of α-functionalized aldehydes.6