The ultimate biological unit lies within a single cell. Many biological disciplines have taken aim to elucidate the causes of cellular differentiation at this level. The secret triggers that signal human maturation, regeneration and genetic diseases all lie buried in a single cell that was originally part of the genetically clonal, multicellular organism. Despite careful work with sophisticated instrumentation available for the dissection of tissue samples, several studies suggest that pooled cell samples, thought to be homogenous, are often composed of cells with quite different phenotypes.1

Development and commercialization of economical, easier-to-use single cell tools have enabled more researchers to explore this novel area. These include means to isolate single cells, such as fluorescence activated cell sorting, laser capture microdissection, optical tweezers and atomic force microscopy. Once single cell samples were readily available, applications such as fluorescent in situ hybridization or FISH3 could be used to identify the differences between populations of single cells. This has resulted in an explosion of work and speculation in the field of single-cell biology.4-6

Adapting multicell/tissue techniques to single cell study often has limited utility because of technical shortcomings – mostly problems related to sensitivity. Despite the raw potential for single cell genomic analysis, the field has been restricted to comparative analysis of relatively few genomic loci for large numbers of single-cell isolates. Techniques such as FISH or single-cell PCR can only be used to probe a small number of DNA sequences before the cell is destroyed. Likewise, the small sample size of a single cell has so far allowed limited investigation of gene expression, proteomic make up and the characterization of cell metabolites.

Whole genome amplification (WGA) offers a means to overcome the above restrictions for single-cell genomic analyses. WGA has been described as a non-specific amplification technique that affords an amplified product completely representative of the initial starting material. Three different strategies for WGA have been described in the literature.

Linker adapter PCR was first described in 1989.9 In this method, the target DNA is digested with an appropriate restriction enzyme and then each end is ligated to an adapter. These known adapter sequences are used to uniformly amplify each of the many DNA fragments representing the original sample. The method relies on absolutely efficient ligation and unbiased amplification between the identical primed regions (see Figure 1). 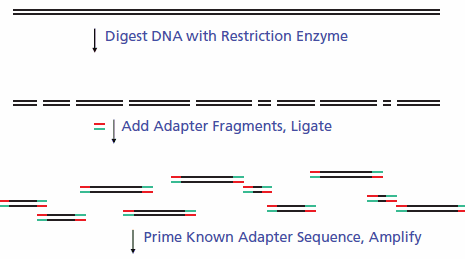 Primer extension pre-amplification (PEP) PCR, in contrast, uses a set of random hexamers to prime template DNA.10 The subsequent thermal cycling conditions use very low (permissive) annealing temperatures and fifty or more cycles to create a series of fragments representing the original input DNA. Bias in the resulting PEP PCR product is due to non-uniformity of random hexamer annealing and extension – DNA sections with infrequent or distant priming events tend to be discriminated against in this method. These shortfalls were largely overcome with multiple strand displacement (MSD) amplification.11 The MSD technique employs a unique and highly processive mesophillic DNA polymerase, phi29. The resulting product consists of long, 10-50 kb, fragments, but good amplification and representation (see Figure 2). Finally, degenerative oligonucleotide primer (DOP) PCR, also described as arbitrary PCR, relies on a set of oligos with a random 3'-end and partially fixed 5'sequence.12 These primers are designed to anneal relatively evenly throughout the DNA sample. Once extended by a polymerase, these products are amplified using oligos targeting their fixed sequences. Primer design is critical for this technique – the oligo must bind relatively evenly throughout the DNA sequence but not bind to other oligonucleotides. This method has also been successfully applied to give representative samples (see Figure 3). 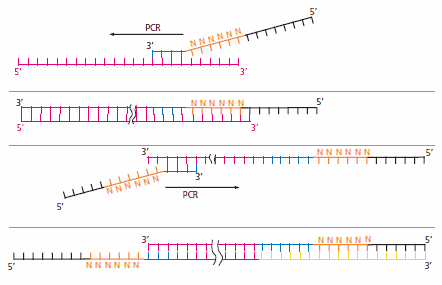 Each of these techniques has been applied to the problem of amplifying the genetic material in a single cell, and has met with some success. PEP PCR was the first to be applied to single cell WGA, and was successfully applied in several subsequent applications.13-14 A variant of the DOP PCR, developed by Rubicon Genomics, was used to amplify single chromosomes,15 a feat very shortly followed by the use of a linker-adaptor PCR method to also completely amplify a single chromosome.16 Finally, MSD with phi29 was used to amplify a series of single cells.8,17

WGA methods differ in two respects: the amount of bias in the product when using limiting amounts of input template and the quality requirements for the input template. The former issue, which in single cell applications manifests itself as apparent loss of information or allelic drop out (ADO), is thought to be due to inequities of local distribution of the reagents near the target.28 The latter phenomenon is dependent on the method, and the fact that damaged DNA can render certain loci unamplifiable.

WGA methods that generate long amplicons, like MSD, can be less robust because priming events are necessarily few and therefore any error in a long amplicon causes a relatively large loss of information. WGA that generates short amplicons, such as PEP PCR, linker-adaptor amplification and DOP PCR, lose less information in such circumstances.

Both DOP PCR and MSD amplification are now available in commercial molecular biology kits, but only the GenomePlex® Kit offered by Sigma-Aldrich has been developed specifically for single cell applications. The technique builds on a product line that was introduced first by Rubicon, and acquired in the fall of 2004 by Sigma-Aldrich as the sole licensee and distributor. Since that time, Sigma-Aldrich has developed four WGA related products, including the original kit (WGA1), a kit with an optimized DNA polymerase (WGA2), a kit to reamplify WGA DNA (WGA3) and a kit for single cell applications (WGA4). At the heart of this product line is a PCR-based WGA method that employs degenerate oligonucleotides coupled with universal adaptors in a combination of PEP and DOP amplification methods. GenomePlex can faithfully amplify 10 ng of genomic DNA in about three hr.

Advances in single cell WGA will allow the researcher to uncover the contribution of genomics to single cell biology. Specifically, cancer and drug discovery research within genomics shows the greatest potential for opportunity. Chromosomal aberrations, as a result of cancer, could be better cataloged when comparing a single cancerous cell to its normal counterpart. In addition, comparing single cells from the ‘treated’ population to the ‘untreated’ to evaluate genomic effects can be used to screen drug candidates.

Understanding differences at the level of a single cell is the ultimate goal of biology. New, commercialized techniques, such as single cell WGA, are opening a new frontier for further study. Considerable work has already been accomplished toward the sensitive, unbiased amplification of single cell RNA to allow for single cell gene expression7,22-27 and this area has already seen the development of commercialized kits to respond to this customer need. As researchers continue to find sensitive means to explore epigenetics, proteomics,18-19 metabolomics and cell signaling,20-21 the whole world of single cell biology will be revealed.