Antioxidants protect biological systems from oxidative damage produced by oxygen-containing free radicals and from redoxactive transition metal ions such as iron, copper, and cadmium.1 During the oxidative metabolism of glucose in the mitochondria, superoxide anions (O2 –) are produced as a by-product ofac the reduction of coenzyme Q complex III. The enzyme superoxide dismutase converts superoxide anions to hydrogen peroxide (H2O2) that in turn can be converted to peroxyl radicals (RO2•), hydroxyl radicals (OH– •), or hypochlorite (ClO–) ions. Superoxide anions can also react with nitric oxide (NO) to form the highly reactive peroxynitrite (ONOO– •).2 Under normal conditions these cellular oxidants are reduced or scavenged by the intracellular antioxidants and antioxidant enzymes, the most important of which are glutathione, thioredoxin, superoxide dismutase, catalase, and peroxidase. Dietary antioxidants, such as ascorbic acid (vitamin C), vitamin E, β-carotene and other carotenoids, and selenium have been recognized as important contributors to the total antioxidant capacity of cells and plasma. The carotenoids lutein and zeaxanthin are important antioxidants in the eye and retina.3 Vitamin E, a mixture of tocopherols and tocotrienols, of which α-tocopherol is the major antioxidant,4 is the major lipid soluble antioxidant in cells and plays a major role in protecting membrane lipids from peroxidation.2 Low density lipoproteins (LDL) carry vitamin E into cells, which subsequently prevents the peroxidation of LDL by donating hydrogen to fatty peroxyl radicals.5 Polyphenolic compounds, especially the flavonoids, have recently been shown to be potent antioxidants in cultured cells. Human studies of flavonoids have also demonstrated effects that can in part be attributed to their antioxidant action.6 Antioxidants can act directly as reducing agents, donating protonic hydrogen to the unpaired oxygen electron or by stabilizing or relocating the free radical electron.7 In the process the reducing agent becomes oxidized; for example, the cysteinyl sulfhydryl groups of two glutathione molecules are oxidized to form the intermolecular cystine of oxidized glutathione (Figure 1). 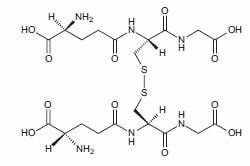 Lipoic acid is an endogenous antioxidant that has recently gained interest as a dietary supplement, since not only can it scavenge free radicals, but it is also a very effective reducing agent in its dihydrolipoate form. Lipoic acid reduces the oxidized forms of other antioxidants and ultimately can maintain the tissue concentrations of reduced glutathione.8

Some antioxidants trap or scavenge the free radicals, and in the process become radicals themselves. When the carotenoids astaxanthin (Figure 2), lutein, and zeaxanthin scavenge oxygen free radicals, the charge of the unpaired electron becomes delocalized over the entire polyene chain of the molecule.9 The flavonol quercetin is oxidized to a quinone that can react with thiols.10 Flavonoids are also excellent metal ion chelators and can prevent copper-catalyzed peroxidation of LDL.1,4,11 The stilbene phytoalexin resveratrol is more potent than the flavonoids in chelating copper and preventing peroxidation of LDL.12 This likely contributes to the antiatherosclerotic actions of resveratrol and the flavonoids.

Flavonoids and carotenoids, the major dietary antioxidants, are ubiquitous in fruits and vegetables. Epidemiological studies indicate that populations with diets high in these phytochemicals also have lower incidence rates of chronic diseases associated with oxidative stress, such as atherosclerosis, diabetes, neurodegenerative diseases, and cancer.8 However, there is much disagreement concerning the mechanism of action of polyphenols in vivo. Polyphenols are treated as xenobiotics by the body and are rapidly metabolized and conjugated in the intestinal lining and liver. With the exception of the gallic acid conjugates of the catechins, such as epigallocatechin gallate,13 most flavonoids in the blood are glucuronide, sulfate, or O-methylated conjugates.4,14 These conjugates are essentially devoid of antioxidant activity.15 Moskaug, et al., hypothesized that the flavonoids enhance cellular antioxidant systems by inducing a chronic, low level of oxidative stress in cells, thus boosting the cellular antioxidant defense system (the hormetic principle).15 In contrast, Halliwell, et al., argued that micromolar concentrations of unabsorbed flavonoids and other phenolics remain in the small intestine and colon where their antioxidant, metal chelating, and other actions are protective against colorectal carcinogenesis.4

Recent studies confirm that the polyphenols have many intracellular effects beyond scavenging free radicals and chelating metal ions. Reactive oxygen species (ROS) and reactive nitrogen species (RNS) are also potential signaling molecules. They regulate gene expression via a class of redox-sensitive transcription factors that includes Nrf2, which induces expression of antioxidant/detoxifying enzymes, and NFkB and AP-1, which induce production of inflammatory cytokines, cell adhesion molecules, acute phase proteins, and are antiapoptotic.1,2,16 These transcription factors are activated in response to oxidative stress; persistently elevated ROS levels activate NFkB by inducing the phosphorylation and disassociation of its inhibitory subunit, IkB. Silymarin and silybin (silibinin),17 catechins and procyanidins,1,11 and other flavonoids16 have been reported to block the activation of NFκB.

Forman, et al., cite evidence that hydrogen peroxide and superoxide anion exhibit the properties of second messengers by mediating redox signaling responses. They hypothesize that peroxides interact reversibly with critical cysteine thiolates that are present in the active site of signaling proteins.18 Protein tyrosine phosphatase and thioredoxin are known to have active site cysteines in the thiolate form, while the transcription factors AP-1 and NFκB and some caspases have redox sensitive cysteines that may be in the thiolate form. Zinc-bound cysteines in the regulatory site of some protein kinase c isoforms may also be oxidized by hydrogen peroxide. The receptor-stimulated production of peroxide also leads to the activation of all mitogen activated protein kinase pathways (ERK, JNK, and p38 MAPK). Other signaling proteins and enzymes are targeted by nitric oxide, peroxide, or both oxidants (Table 1). Therefore antioxidant polyphenols that scavenge reactive oxygen intermediates may have profound effects on intracellular signal transduction pathways that mediate cellular responses to oxidative stress.