HomeGas Chromatography (GC) How to Choose a Capillary GC Column

How to Choose a Capillary GC Column

An optimized chromatographic separation begins with the column. The selection of the proper capillary column for any application should be based on four significant factors:

The practical effects of these factors on the performance of the column are briefly discussed below, in order of importance. Note that this information is general. Specific situations may warrant exceptions to these guidelines.

Choosing a stationary phase is the most important step in selecting a column, because it dictates selectivity, or the ability of the column to separate sample components. A stationary phase is the film chemically bonded to or coated on the inner wall of a capillary column, and should be selected based on the application to be performed. The differences in the chemical and physical properties of injected organic compounds and their interactions with the stationary phase are the basis of the separation process. When the strength of the analyte-phase interactions differs significantly for two compounds, one is retained longer than the other. How long they are retained in the column (retention time) is a measure of these analyte-phase interactions.

Changing the chemical features of the stationary phase alters its physical properties. Two compounds that co-elute (do not separate) on a particular stationary phase might separate on another phase of a different chemistry, if the difference in the analyte-phase interactions is significant. This is the reason for providing a wide variety of capillary column phases. Each phase provides a specific combination of interactions for each chemical class of analytes.

Gas chromatography, first established in the 1950s, is a mature analytical technique with many established applications. Therefore, it is probable that literature, such as written methodology or journals, exists stating which stationary phases have successfully been used for a given application. Additionally, column manufacturers routinely publish phase selection charts, such as those in our GC Column Selection Guide. Charts like these are conveniently arranged by industry to simplify the process of selecting the proper phase. First, find the chart that matches your industry or area of interest. Then, locate the application within that chart to identify a recommended column phase.

For new applications, there is often no existing reference to provide guidance. In these 'method development' instances, one must have some knowledge of the chemistry of the compounds to be analyzed. Phase selection is based on the general chemical principle that "likes dissolves like." A non-polar column is the recommended starting point for the analyses of non-polar compounds. Likewise, polar columns are usually recommended for the separation of polar compounds. Table 1 describes several recommended phases for each group of compound polarities.

The current range of commercially available capillary column internal diameters (I.D.s) enables the balancing of two factors: efficiency (number of theoretical plates) and sample capacity (amount of any one sample component that can be applied to the column without causing the desired sharp peak to overload). Optimizing one of these factors requires a sacrifice from the other. The ideal I.D. for a given application is dependent on the analytical needs.

Efficiency is observed chromatographically as narrow and well-resolved peaks. The efficiency of a capillary column, measured in plates (N) or plates per meter (N/m), increases as the I.D. of the column decreases. This is one of the basic principles behind Fast GC. If the sample to be analyzed contains many analytes, or has analytes that elute closely together, the most narrow I.D. capillary column that is practical should be selected. Note that very narrow bore columns, such as 0.10 or 0.18 mm I.D., may require specialized equipment, such as a GC with a pressure regulator that allows a higher column head pressure.

Our Fast GC brochure contains practical considerations, a theoretical discussion, a listing of columns in fast GC dimensions, chromatograms, a listing of related products designed to maximize performance, plus a list of literature for additional reading.

Capacity increases as column I.D. increases. Wide bore columns can accommodate a larger mass of each analyte in a sample than narrow bore capillary columns. Exceeding the sample capacity of a column will result in skewed peaks and decreased resolution. Therefore, if the samples to be analyzed contain compounds at high concentrations, or represent a wide range of concentrations, then a wide bore column should be considered. If the proper I.D. is chosen, the column should allow the system to provide sufficient sensitivity for the minor components without being overloaded with the major components. The analyst must decide if the loss in efficiency resulting from using a wide bore column is problematic for their application. Note that the nature of the sample components and the polarity of the phase will affect sample capacity. Non-polar phases have higher capacities for non-polar analytes, and polar phases have higher capacities for polar analytes.

Most 0.25 mm I.D. columns have a 0.25 or 0.50 µM film thickness. Depending on the application, the optimal film thickness may be different.

The benefits of decreasing film thickness are sharper peaks (which may increase resolution) and reduced column bleed. Both of these benefits increase signal-to-noise. Additionally, the column's maximum operating temperature will be increased. The drawbacks are increased analyte interaction with the tubing wall, and decreased analyte capacity. Decreasing film thickness also allows analytes to elute with shorter retention times and at lower temperatures, which may be desirable or undesirable, depending on the application. Decrease film thickness for analytes with high (>300 °C) boiling points (such as pesticides, PCBs, FAMEs, phthalate esters, and other semivolatile compounds), or for trace analyses.

The benefits are reduced analyte-tubing interaction and increased sample capacity. The drawbacks are increased peak widths (which may reduce resolution), increased column bleed, and a reduced maximum operating temperature for the column. Increasing film thickness also leads to increased analyte retention (may also increase resolution, specifically for compounds with low k) and increased elution temperature. Depending on the application, these last effects may be either desirable or undesirable. Increase film thickness for analytes with low boiling points (such as volatile organic compounds and gases). This is necessary to provide adequate retention, and may eliminate the need for subambient oven conditions. Also increase film thickness for higher concentration samples to minimize the risk of compound overload.

Effects of phase film thickness are interdependent with column I.D. The phase ratio, beta (β), expresses the ratio of the gas volume and the stationary phase volume in a column:

In contrast to relative terms (" thin film" and " thick film" ), β values establish a distinct ranking for each column. As a general rule, select columns by β values as shown in Table 3.

Beta value is also useful when changing column I.D. and film thickness combinations for a particular analysis, since columns with the same phase ratio will provide very similar retention times and elution order under the same analytical conditions. An example is shown in Figure 1. 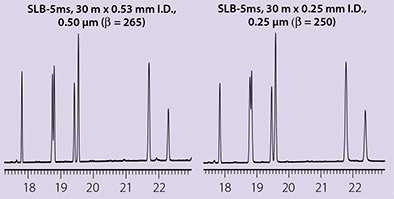 Shorter columns are recommended when great resolution is not required, such as for screening purposes or for simple samples whose components are dissimilar in chemical nature. However, if column I.D. is decreased along with length, resolution can be maintained, or in some cases, actually increased.

Over time, the inlet end of a capillary GC column can become contaminated from the accumulation of non-volatile material. The phase in the front section of the column can also be damaged from the continuous condensation and vaporization of solvent and analytes. Inevitably, active analytes will adsorb to this contaminated/damaged section (the analytes "drag" when passing through the inlet end of the column). Poor peak shape (peak tailing), loss in resolution, and reduced response may be observed. When the chromatographic system degrades to an unacceptable level, it may be possible to restore performance by clipping the contaminated/damaged section off the inlet end of the column. A decrease in retention times and resolution occurs each time the column is clipped, as theoretical plates are lost. Eventually, the column will be rendered useless.

Match the deactivation of the fused silica tubing with the polarity of the injection solvent. In most cases, it is also recommended to match the I.D. of the capillary column. Table 5 lists I.D. and O.D. information for our analytical and guard columns. Choose:

These are used for attaching a guard column/retention gap to an analytical column, or for repairing a broken column. We offer two options for connecting two pieces of fused silica tubing. The butt connector is a small stainless steel fitting that makes a zero dead volume seal. The GlasSeal connectors offer convenience.