Pistachios are popular and enjoyed for both taste and health benefits such as decreased cholesterol, weight management, protection against diabetes and hypertension, and improved digestion.1 These nuts are grown in the United States (specifically, California), Italy, and countries in Central Asia like Iran, Turkey, Afghanistan and Syria. Pesticide tolerances set by the US EPA for pistachios range from 0.01 - 0.7 μg/g before harvest to 3 - 200 μg/g after harvest, depending on the pesticide.2 Testing for pesticide residues then requires a method which will allow for low level and accurate determination. The "quick, easy, cheap, effective, rugged and safe" (QuEChERS) approach has been used to analyze multiple pesticide residues found in pistachios.3

Pistachios contain approximately 45% fat, which can result in a significant amount of co- extracted matrix in the acetonitrile extract generated using the QuEChERS procedure. The use of a cleanup sorbent which can reduce this fat is essential to prevent fouling of LC-MS/MS and GC-MS/MS systems, and minimize ion suppression, thus allowing low level detection. In this application, Supel™ QuE Z-Sep+ sorbent was used as part of the QuEChERS method in the analysis of pesticide residues in pistachios. Z-Sep+ is a zirconia and C18 functionalized silica sorbent which acts to retain fatty constituents through both Lewis acid/base and hydrophobic interactions. The selectivity of the zirconia present in Z-Sep+ offers retention of a wider range of fats than C18 alone. In this application, QuEChERS extraction and cleanup using Z-Sep+ sorbent were used before the LC-MS/MS and GC-MS/ MS analysis of pesticide residues in pistachios. The targeted analyte list included pesticides relevant to pistachios.4,5

Pistachios were purchased from a local grocery store. They were frozen with liquid nitrogen (shells on), ground, and spiked at 10 ng/g with the pesticides listed in Tables 2 and 4, and allowed to equilibrate for 1 hour. Samples were then subjected to QuEChERS extraction and cleanup with Z-Sep+ following the procedure in Figure 1. A 100 μL aliquot of the final extract was diluted to 1 mL with 5 mM ammonium formate/0.1% formic acid in water, and analyzed by LC-MS/MS using the conditions shown in Table 1. 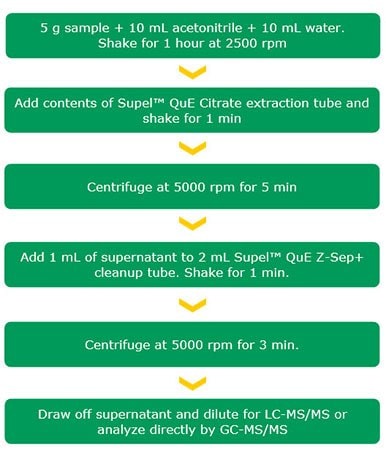 Initially, cleanup using Z-Sep+ sorbent was compared to PSA/C18, a common QuEChERS cleanup sorbent for fat-rich samples. A visual comparison of the QuEChERS extracts (in acetonitrile) is shown in Figure 1. Both cleanups removed some green color, resulting in similar light yellow extracts. GC-MS-scan comparisons (Figure 2) show lower background after Z-Sep+ cleanup compared to PSA/C18. The predominant peaks present in the uncleaned extract are fatty acids and monoglycerides. While PSA/C18 only reduced the levels of these compounds, almost none were detected after Z-Sep+ cleanup.

Table 5 shows the average %Recovery and %RSD for n=3 replicates of spiked pistachio samples. The majority of the pesticides were analyzed by LC-MS/MS; and those without sufficient response were analyzed by GC-MS/MS. Out of the 30 pesticides analyzed, 22 had recoveries within the generally accepted range of 70-120 %. Reproducibility was good, with RSD values < 20% for all 30 pesticides, and < 10% for many. Two pesticides, etoxazole and trichlorfon, had recoveries < 50%. Trichlorfon was most likely retained by the Z-Sep+ sorbent during the cleanup step. This could be due to the Lewis base character of the phosphate group present in its structure. Etoxazole, on the other hand, does not contain a phosphate group. It is a very lipophilic pesticide, indicated by its log P value of 5.6. Extraction efficiency of this compound from the fatty pistachio matrix was probably very poor using acetonitrile. Spinetoram, with a log P of 6.3, also showed lower recovery (56%) than a majority of the pesticides studied. This trend of decreased recovery for high log P pesticides has been observed by others for high fat matrices.6 Recovery of both of these compounds may be increased by addition of a less polar solvent such as ethyl acetate for the extraction; however, an increase in the level of co-extracted background can be expected.

Figure 2.Comparison of Pistachio Extracts; Before and After Cleanup. 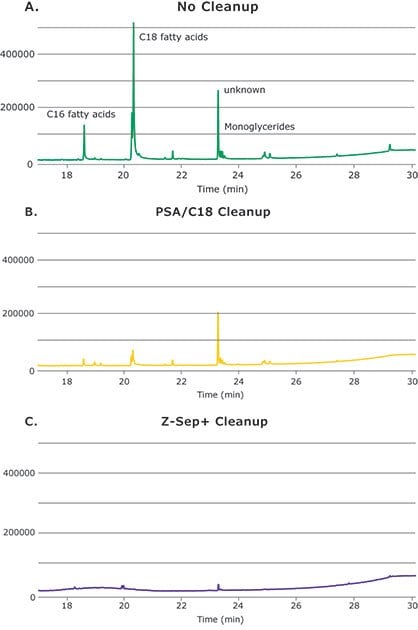 Figure 3.GC-MS-Scan Comparison of Pistachio Extracts With (a) No Cleanup, (b) PSA/C18 Cleanup, and (c) Z-Sep+ Cleanup; All the Same Y-scale.

Pistachios, which contain 45% fat, present a challenging matrix when doing pesticide residue analysis. If using QuEChERS extraction, some fat will be co-extracted with the analytes of interest. Thus, the cleanup step must be able to reduce this background. In this application, the use of Supel™ QuE Z-Sep+ was demonstrated for the effective cleanup of these extracts prior to LC-MS/MS and GC-MS/MS analysis. Fatty acid and monoglyceride background were significantly reduced using Z-Sep+, and compared to PSA/C18 cleanup, the resulting extract had lower background; as evidenced by GC-MS-scan data.

Pesticide recovery was within the acceptable range of 70-120% for 22 out of 30 targeted pesticides, with excellent reproducibility demonstrated for spiked replicates.