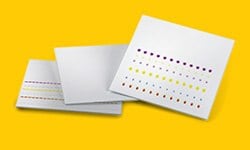 Thin layer chromatography (TLC) is an affinity-based method used to separate compounds in a mixture. TLC is a highly versatile separation method that is widely used for both qualitative and quantitative sample analysis. TLC can be used to analyze virtually any substance class, including pesticides, steroids, alkaloids, lipids, nucleotides, glycosides, carbohydrates, and fatty acids.

In TLC, the stationary phase is a thin adsorbent material layer, usually silica gel or aluminum oxide, coated onto an inert plate surface, typically glass, plastic, or aluminum. The sample is spotted onto one end of the TLC plate and placed vertically into a closed chamber with an organic solvent (mobile phase). The mobile phase travels up the plate by capillary forces and sample components migrate varying distances based on their differential affinities for the stationary and mobile phases. When the solvent reaches the top of the plate, the plate is removed from the developing chamber and dried. The separated components appear as spots on the plate and the retention factor (Rf) of each component is assessed.

TLC is based on the classic chromatography principle where mixture components are separated between a fixed stationary phase and a liquid mobile phase by differential affinities between the two phases.

TLC is widely used by many industries and research fields, including pharmaceuticals, clinical testing, environmental toxicology, food, water and pesticide analysis, and cosmetics. Typical applications of TLC include:

Large Molecule HPLC
High performance liquid chromatography (HPLC) can be used to separate and identify different large biomolecules such as protein and peptides in a sample. It is based on the pumping of a sample with a solvent (mobile phase) through a column packed with sorbent material (stationary phase) at a high pressure.
Gas Chromatography (GC)
Gas chromatography is a common analytic technique used to separate and analyze volatile compounds in the gas phase. GC is applied in many industries for quality control, and to identify and/or quantify compounds in a mixture.
Mass Spectrometry
Mass spectrometry (MS) is an analytical tool used to identify compounds, determine chemical structure, and assess isotopic abundance. In MS, samples are ionized, and the resulting ions are identified based on their mass-to-charge (m/z) ratios.
Wet Chemical Analysis
The wet chemical analysis involves identifying and quantifying the desired elements present in a liquid sample using several measuring techniques. With chemical reagents, the analyte converts a dye proportionally, which can be read-out visually or photometrically.
Low Pressure Liquid Chromatography
Low pressure liquid chromatography (LPLC) is a chromatographic technique that operates at low pressures to drive the mobile phase onto the column containing a stationary phase by the action of a pump.
Small Molecule HPLC
Small molecules are ions and compounds of molecular weight typically less than 900 daltons. These compounds can be effectively separated and analyzed by HPLC, UHPLC and LC-MS using mainly silica particles or monolithic stationary phases with a broad range of column chemistries (modifications).

Thin Layer Chromatography (TLC)
We offer a variety of TLC plates including classical TLC plates with silica, aluminum, glass, and plastic backings in various dimensions as per your needs. Also available are the HPTLC plates, MS-Grade TLC and HPTLC plates, and PLC plates.
LPLC Media & Accessories
Browse through our portfolio to choose from a wide selection of products required for LPLC applications such as columns, a variety of adsorbents, ion exchange resins, separation media, and accessories, designed to fit your unique application demands.
HPLC Columns
Our wide selection of HPLC columns for small and large molecule analysis allows you to enhance the separation process in terms of retention, resolution, selectivity, and analysis time, all while reducing the time for method development.
Solvents
Browse through our comprehensive range of solvents offered under three portfolio brands for your various applications: Supelco® for analytical methods, Sigma-Aldrich® for classic research and production, and SAFC® for biopharmaceutical and pharmaceutical applications. Order online.
Acids
Explore a comprehensive range of acids offered under three portfolios for a variety of applications: Supelco® products for analytical chemistry, Sigma-Aldrich® materials for lab and production, SAFC® products for biopharmaceutical and pharmaceutical development and manufacturing.