Automation is used for many applications to reduce variation caused by manual han­dling and to obtain reproducible results in high-throughput assays. High-throughput applications, such as knockdown studies or target screenings, often include cell trans­fection. In the present study, X-tremeGENEHP and X-tremeGENE9 Transfection Re­agents (Roche) were tested for their compatibility with an automated transfection workstation, the Biomek FX. 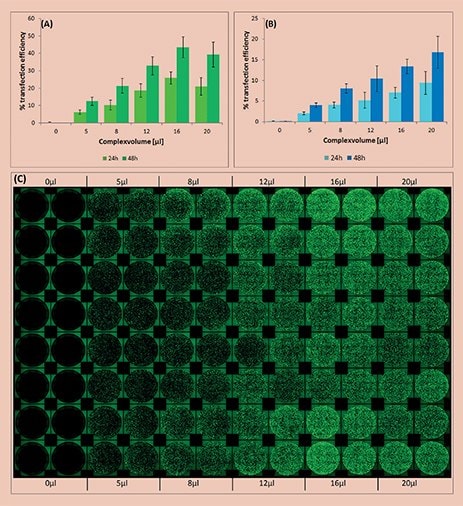 Cell Culture and Reverse Transfection – HeLa cells (ATCC® CCL-2™) were cultured in MEM with supplements at +37 °C in a 5% CO2 humidified atmosphere in T75 flasks until a confluence of about 70%. Cells were harvested by trypsinization shortly before transfection, washed and resuspended in fresh medium (1.2x105 cells/mL). Reverse transfection was performed by pipetting 100μl cell suspension to each well already containing the transfection complex.