Some Bacillus species play a critical role in helping us understand more about bacteria, while others are dangerous spoiling organisms or even pathogens. All, however, are important in biotechnological research.

Bacillus species are Gram-positive, rod-shaped bacteria; they can be either obligate or facultative aerobes and show positive reaction in the catalase test. Members of the genus Bacillus are known to form spores under stressful conditions. These endospores are highly resistant to heat and radiation and are viable for extremely long periods.

B. subtilis is one of the best-understood bacteria, thus it is often used in molecular biology and as a general model organism. Its harmless nature, brilliant genetic amenability and relatively large gene size make the organism a highly valuable tool for science and demonstration purposes. Bacillus subtilis has been used to help demonstrate biochemical differentiation, gene/protein regulation and cell cycle events in bacteria.

B. thuringiensis is an important insect pathogen. Its Bt toxin is specifically active against several undesirable species of insects. Therefore, the Cry and Cyt genes are used for the production of biological-based insecticides; in agriculture, the toxin genes are used to modify crops to make them insect-resistant.When insects take up the substance, it is cleaved under the alkaline conditions in their digestive tract, and the toxin becomes active. The protein then inserts itself into the insect’s gut cell membranes, forming a pore and resulting in swelling, cell lysis and possible death for the insect.

B. anthracis causes anthrax. The name anthracis comes from the Greek anthrakis, meaning “coal”, because in the most common form of the disease, cutaneous anthrax, the sufferer develops large black skin lesions. It is a relatively big (1–6 μm) facultative aerobe, non-motile organism that can formcentrally located ellipsoid spores even under stressful conditions. The cells are usually built in chains. In vivo, the bacterium forms a capsule from polyglutamate, which protects it fromphagocytosis. On blood agar cultures, however, the capsule is usually not present. Genotypically and phenotypically, it is very similar to Bacillus cereus and to Bacillus thuringiensis, but there are some differentiating characteristics. (Table 1) 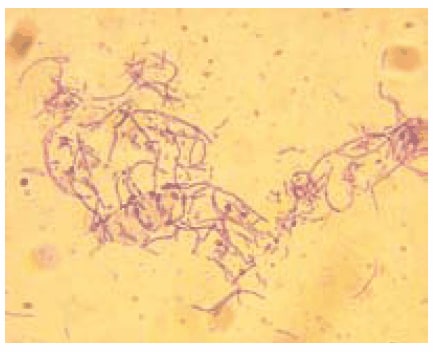 B. cereus causes a foodborne illness similar to those caused by Clostridium perfringens or Staphylococcus aureus. B. cereus is a facultative aerobe, beta hemolytic soil bacteria that produces exotoxins. There are two types of illness caused by B. cereus, depending on the contaminated substance ingested: a diarrhoea type (similar to that caused by C. perfringens) and a vomiting type (similar to that caused by Staphylococcus aureus). The minimum infectious dose is about 106 germs/g. Infection sources for the diarrhoea type of B. cereus infection are sweets (pudding, vanilla sauce), meats (roast, goulash, sausages), vegetables, salads, soups and UHT milk products. The vomiting type of B. cereus illness is caused by contaminated cooked rice that has been reheated. The risk for strong propagation and the resulting illness can be minimised by storing foods at <5 °C or >65 °C and by rapidly cooling down foods, thus lowering the pH value to <4.5 with a respective aw-value of <0.95. Note: B. cereus spores are in most cases not eliminated by heating; in fact, heating activates spore germination. At the same time, however, the spoilage flora is eliminated.