There are many common techniques for rigorous surface cleaning; however, the choice is dependent on substrate type, the degree of contamination, and the desired cleanliness of the surface. Heavily contaminated inorganic substrates can be cleaned by washing and ultrasonication in aqueous surfactants and solvents, followed by immersion in piranha solution (H2O + H2O2 + H2SO4 — warning, extremely hazardous). Silica surfaces (including silicon wafers) can be cleaned using the less hazardous RCA-1 clean (H2O + H2O2 + NH4OH) in place of piranha solution, which introduces silanol (Si-OH) groups to the wafer surface to allow reaction with silanes. For less heavily contaminated inorganic surfaces, a ′dry′ clean using UV/O3 exposure will often suffice.

Organic surfaces such as polymers or cellulose are often cleaned simply using solvents. If the material does not intrinsically contain nucleophilic amine or hydroxyl groups, the surface can be ′activated′ by a variety of means (e.g., UV/O3 or O2 plasma to introduce hydroxyl groups, treatment of polyesters with ethylenediamine to introduce amine groups).24

After the surface is clean the initiator monolayer can be formed using a method specific to the surface type.

3. Silica/silicon and other metal oxides: Many publications use presynthesized silane ATRP initiators for these surfaces. However, a procedure suitable for all levels of synthetic expertise is provided below (and illustrated in Figure 1), using only commercial reagents:

Initiator-coated substrates can be stored in air for several weeks without significant loss of activity. 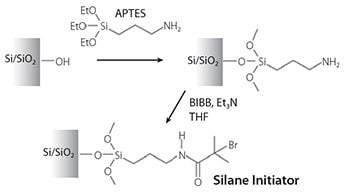 A typical procedure for the growth of PMMA polymer brushes is given below, and illustrated in Figure 2.

Figure 2. Polymerization of methyl methacrylate from a surface.