Cell Based Assays for Apoptosis Detection

Apoptosis, or programmed cell death, is a growth-limiting regulatory mechanism by which cells can trigger their own death in response to extracellular signals because of irreparable cellular or DNA damage. The ability of tumor cells to elude apoptosis is a hallmark of most types of cancer. Apoptosis also plays an important role in developmental mechanisms, such as preventing the overgrowth of neuronal cell lineages in the developing brain and regulating interdigital spacing in limb development. Autophagy and apoptosis are connected and extensive crosstalk occurs between the two. For example, during nutrient deficiency, autophagy functions as a pro-survival mechanism. However, excessive autophagy may lead to cell death, a process morphologically distinct from apoptosis. Apoptosis is a multistep process including early, mid and late-stage cellular events which can be detected using various cellular assays including Annexin V, Caspase and TUNEL detection methods outlined below. 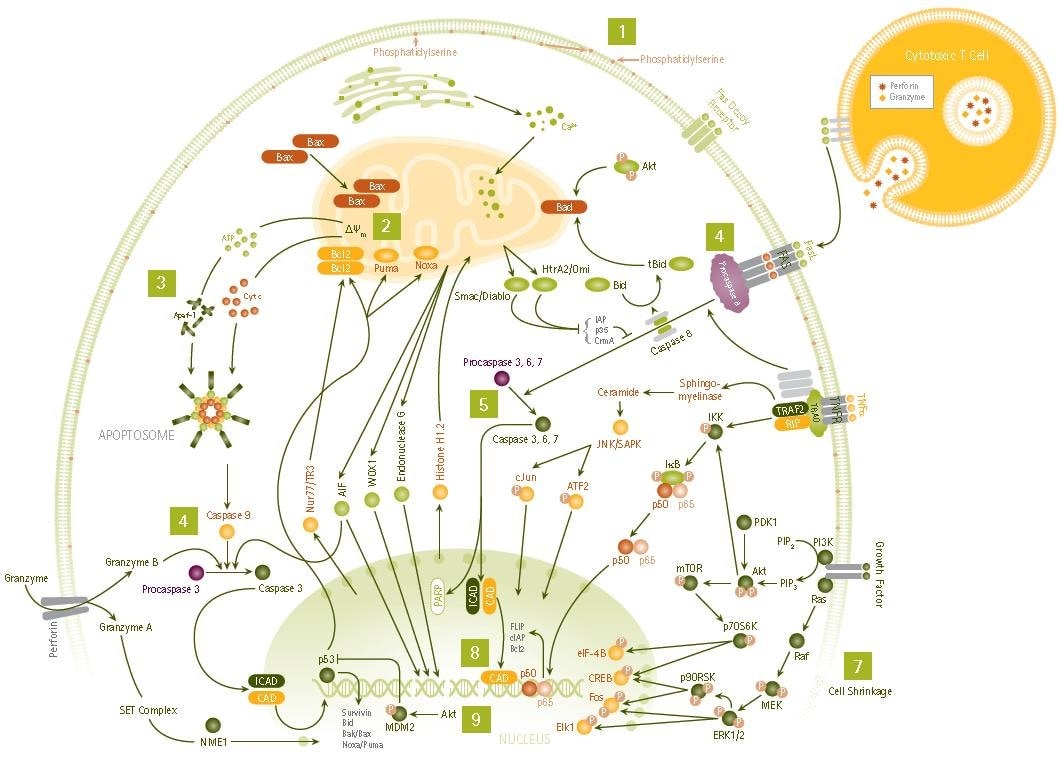 Early-Stage Events: Translocation of phosphatidylserine to the outer leaf of plasma membrane (1), loss of mitochondrial membrane potential (2), cytochrome C & ATP release (3) and activation of caspase-8 and 9 (4).

Annexin V Assays: Phosphatidylserine is normally confined in the inner membrane leaflet of viable cells. The translocation of phosphatidylserine to the exposed membrane surface is an early event in apoptosis, where it serves as a signal for the attack of phagocytic cells. Annexins are a family of structurally related proteins that can bind specifically to cellular membranes. Annexin V has a very high affinity for membranes containing the negatively charged phospholipid phosphatidylserine and can be used as marker of early apoptosis events.

Mitochondrial Detection: Mitochondria are important cellular organelles that maintain crucial cellular energy balance, contain key regulators of cell death processes such as apoptosis and play a significant role in cellular oxidative stress generation. Collapse of mitochondrial membrane potential is believed to coincide with the permeabilization of the outer mitochondrial membrane, and release of Cytochrome C and other pro-apoptotic proteins into the cytosol, which then triggers the downstream events in the apoptotic cascade.

Caspase Detection Assays: A central component of the apoptotic process is a cascade of proteolytic enzymes called caspases. Caspases participate in a series of reactions that are triggered in response to pro-apoptotic signals and result in the cleavage of protein substrates, causing the disassembly of the cell. Caspase enzymes specifically recognize a 4 or 5 amino acid sequence on the target substrate which necessarily includes an aspartic acid residue. This residue is the target for cleavage, which occurs at the carbonyl end of the aspartic acid residue. 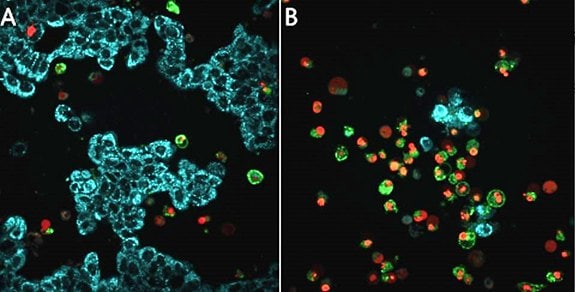 TUNEL Assays: DNA fragmentation in apoptosis is usually associated with structural changes in cellular morphology and is a hallmark of late-stage apoptosis. DNA fragmentation in apoptosis can be examined using the TUNEL assay. The in situ staining of DNA strand breaks detected by the TUNEL assay and subsequent visualization by light microscopy gives biologically significant data about DNA damage and late-stage apoptosis. 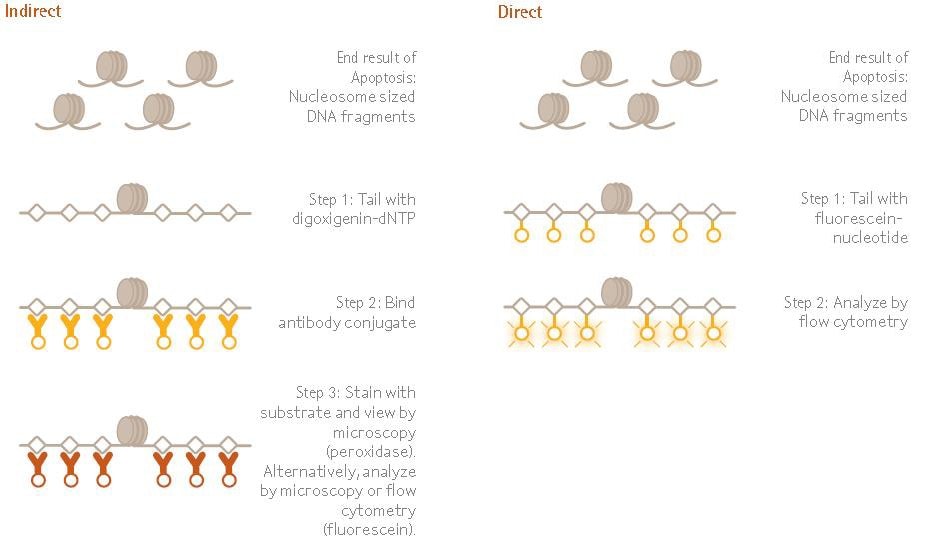 Figure 3.The ApopTag™ family of apoptosis kits examine DNA fragmentation by the TUNEL assay. The DNA strand breaks are detected by enzymatically labeling the free 3’-OH termini with modified nucleotides. These new DNA ends that are generated upon DNA fragmentation are typically localized in morphologically identifiable nuclei and apoptotic bodies.

H2A.X Assays: Double-stranded DNA breaks (DSB) are generated that rapidly result in the phosphorylation of histone variant H2A.X. Because phosphorylation of H2A.X at Ser139 correlates well with each DSB, phospho-H2A.X is a sensitive marker used to examine DNA damage and late stage apoptosis.

Programmed cell death (apoptosis) is controlled by multiple signaling and effector pathways linked to mitochondrial depolarization, caspase related apoptotic enzyme cascades, DNA fragmentation and ultimately cell blebbing and destruction. The integrity of these and other links can be genetically compromised in many diseases such as cancer making detection and measurement of apoptosis extremely useful in many research assays. Our well-published apoptosis assays, including the ApopTag® family of the TUNEL assays and the CaspaTag™ family of In Situ Caspase detection assays allows reproducible insights into cell death mechanisms.