The speculated health benefits from the consumption of omega 3 fatty acids are numerous1. Variants that appear to be most important in human physiology are:

The purpose of the work published here was to identify the omega 3 fatty acids in two different sources of fish oil. Only a single sample of each source was processed, so this work should not be considered a definitive comparison of profiles between these source types.

The samples analyzed for this work were as follows:

The fish oil capsule was prepared for analysis using alkali hydrolysis followed by methylation as described in AOAC Method 991.392. The mixture was blanketed with nitrogen throughout the extraction process to prevent oxidation of the polyunsaturated fatty acids. The salmon sample underwent acid digestion, alkali hydrolysis, and methylation as described in AOCS Official Method Ce 1k-093. Butylated hydroxytoluene (BHT) was added to the salmon sample as an antioxidant prior to extraction. The methylation procedure used in both methods converts fatty acids to fatty acid methyl esters (FAMEs) prior to analysis. All extracts then were concentrated to 1 mL prior to gas chromatography (GC) analysis.

Two capillary GC columns of slightly different selectivities were used for analysis. Conditions were according to AOAC 991.39 and AOCS Ce 1i-07 methods2,4. This was possible as both methods share the same set of run conditions. Peak identification was done by retention time matched to standards. This data was published previously5.

Sardine and anchovy were listed as the fish sources on the fish oil capsule packaging. Based on published fatty acid compositional data for these types of fish oils, C16:0 and C20:5n3 (EPA) were expected to be the most abundant FAMEs present, followed by C16:1, C18:1, and C22:6n3 (DHA)6. The chromatogram of the fish oil capsule extract is shown in Figure 1, and matches the expected pattern. The C14:0 peak detected was from the sardine portion of the oil. This fatty acid is of much lower abundance in anchovy oil. 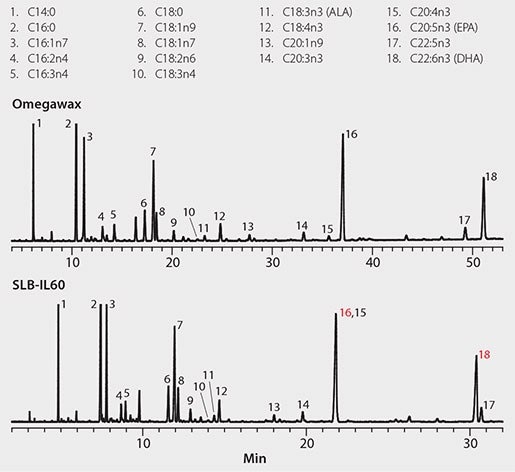 Good peak shapes were observed with both GC columns for these analytes. Because both columns have similar selectivity, elution order was comparable, but not exact. With the SLB-IL60:

These highlight the differences in analyte-stationary phase mechanisms between the columns. Lastly, an overall faster elution (31 minutes compared to 52 minutes) was obtained with the SLB-IL60. 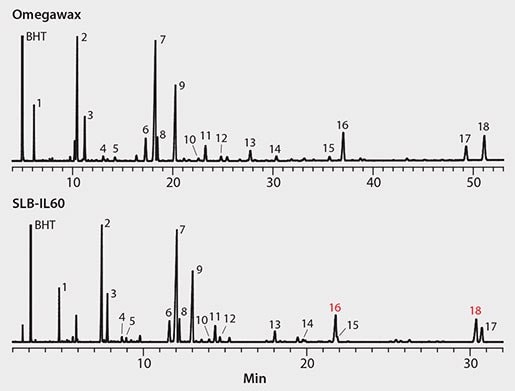 Peak IDs and conditions are the same as Figure 1

The data presented here provide an indication of the different omega 3 fatty acids that may be found in two different sources of fish oil. Only a single sample of each source was processed, so this work should not be considered a definitive comparison of profiles between these source types. Two GC columns of slightly different selectivity were used to generate chromatograms with subtle elution order changes, indicating these phases for analysts who wish to perform confirmatory analysis.