Salts, organic solvents, and RNA can interfere with restriction enzyme digestion or analysis of digested fragments.

The classical technique for cloning of genomic DNA fragments into a plasmid or other vector involves digestion with one or more restriction enzymes followed by enzymatic ligation of the fragments to the linearized vector. Digestion with rare cutters (e.g., NotI) produces large fragments for cloning into YACs and BACs. Digestion with frequent cutters produces smaller fragments that can be cloned into plasmids. When the goal is to prepare random DNA fragments, this is referred to as “shotgun” cloning. For looking at repeats and expansions in genomic DNA, it might be necessary to generate large insert libraries for efficient sequence assembly. The use of silica and anion exchange media for genomic DNA preparation typically does not produce fragments > 50 kb. Therefore, careful consideration is needed to design procedures that may include isolation of digested genomic DNA from gel plugs and size fractionation using PFGE or Contour-clamped homogeneous electric field (CHEF) systems. Cloning may also be performed using PCR-based techniques. These usually use PCR to amplify genomic DNA fragments prior to ligation to recipient vectors, in which specific point mutations can be introduced to alter function.

Cloned products are typically used for sequencing, hybridization mapping, site-directed mutagenesis, and transcriptional and translational control of gene expression. Other uses are overexpression of specific proteins (with or without tags), as well as transfection experiments to study the structure and function of known proteins.

After cloning and propagation of clones in an appropriate host, DNA may be sequenced. In general, sequencing reactions are very robust and rarely fail to generate at least some data. While there are a number of issues related to DNA sequence composition that may affect base calling, complete failure of reactions is rare.

DNA quality can have an impact on overall performance. Often, simply overloading cycle sequencing reactions with template DNA can have a negative impact. Therefore, we recommend that you accurately determine the concentration and mass of DNA prior to sequencing.

Typically, if sequencing results are poor but genomic DNA amplification has been successful as judged by gel visualization, the consensus is that contamination and inhibition from the genomic DNA are not contributing to the poor results; poor results may be attributable to primers or other reagents used in the sequencing reactions.

PCR is a very powerful technique that can be used to prepare fragments of genomic DNA for subsequent applications including sequencing, cloning, and genotyping. If the subsequent analysis is to be automated, fluorescent dyes are typically included during PCR. Typical amounts of human genomic DNA used in PCR reactions range from 5 to 50 ng. Of interest to oncologists is the surveillance of tissues and cells for genes associated with cancer that may have been amplified or deleted during the development of a tumor. Methods have been developed that allow unbiased identification of genomic copy changes by a balanced-PCR process that takes into account PCR saturation and impurity differences in samples when comparing diseased versus normal cells (8). The single-tube procedure used by Wang et al. allows the application of balanced-PCR to genomic DNA obtained from low numbers of cells with relevance to array-CGH and real-time PCR quantitation. The same procedure can be used for modestly degraded DNA obtained from paraffin-embedded tissue. See earlier in this chapter under FFPE tissue.

Although only small amounts of genomic DNA are necessary for PCR amplification reactions, contaminants can inhibit PCR reactions. These contaminants include hemoglobin or heparin in genomic DNA samples from blood, as well as trace detergents introduced during sample preparation. Poor DNA quality can lead to poor results in PCR.

To minimize DNA degradation from endogenous nucleases, samples should be collected and stored correctly.

In the experiment shown in Figure 4.3, 11 kb amplicons were successfully amplified, and no inhibitory effects were seen with genomic DNA purified using either genomicPrep or QIAamp™. The results demonstrate that the large size of genomic DNA isolated using illustra bacteria genomicPrep Mini Spin Kit makes it suitable for long PCR.

Figure 4.3. Amplification of an 11 kb amplicon from purified bacterial genomic DNA. Five microliters of the eluted genomic DNA solution, corresponding to 50 to 150 ng of the genomic DNA, was used per reaction. Following PCR, equal volumes from each reaction were resolved on a 0.8% agarose gel stained with ethidium bromide. M = 1 kb molecular weight marker 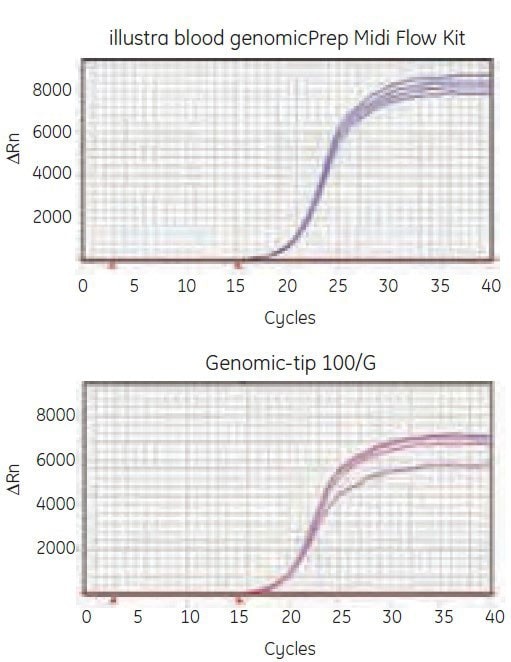 The term genotyping refers to sets of tests that reveal genetic identity and how some traits are inherited from parents. Changes in genomic DNA can correlate with lost or reduced protein function, leading to a measurable change in a cellular biomarker or phenotype. Powerful genotyping tests can be used in forensic identity, disease gene mapping, pharmacogenomics, evolution, and the study of population dynamics. Genetic variation can exist as single-base changes, deletions, insertions, repeated elements, rearrangements, and other sequence modifications such as methylation.

Genotyping has evolved from the simplest tests where DNA fingerprinting was carried out on gels to study RFLP to the more contemporary approaches that use highly parallelized methods and automated detection systems. While probe sets can be developed to reveal a single-base change in a single gene, investigators are frequently interested in revealing many SNP variations across a single genome. Single nucleotide variation has been characterized for many genes and loci within the human genome, accounting for more than 1.5 million SNPs. The International HapMap Project is creating a more detailed, global view of SNPs and their grouping into haplotypes. As methods have developed, it has become possible to do genome-wide association studies to reveal individual SNPs and haplotypes that are correlated with disease susceptibility. Ultimately, mutations can be checked for authenticity by resequencing regions of genomic DNA samples.

Genomic DNA sample preparation is key to achieving optimal results in different genotyping analyses. Individual genotyping tests based on amplicon probes might consume 10 to 50 ng of genomic DNA and require sets of sequence-specific primers and probes. Chips for aCGH and SNP are available that cover hundreds of thousands of allelic variants. Each chip costs ~USD1000 and can report global changes in DNA copy number and sequence-specific variation yet consumes no more than 0.5 to 1 μg of genomic DNA. When very limited amounts of DNA are available it is possible to use WGA to provide sufficient starting material.

Quality factors that can affect the ability to use genomic DNA for genotyping include the degradation state of samples, purity level, and whether samples are contaminated with exogenous DNA.

Elimination of cross-contamination of amplified samples is very important to avoid misinterpretation and the creation of false positives. A number of articles have been published that describe isolation tactics and workflow to minimize cross contamination (9).

An example of genotyping results is shown below. Blood samples from 10 individuals were collected onto Whatman FTA Elute matrix and processed for genotyping analysis of the UGT2B15*2 gene. The samples were run in sets of four replicates and plotted as a function of the fluorescence of the two dyes HEX and FAM. Figure 4.5 shows a clear distinction between heterozygous (wt/mut) and homozygous (mut/mut or wt/wt) samples. These types of data demonstrate that FTA Elute yields a very clean DNA template that is reproducible and excellent for use with the highly sensitive Scorpions ARMS technology. Figure 4.5. Genotyping was performed on four replicates each of 10 different DNA samples purified on FTA Elute. This assay was performed on a Stratagene Mx3000P™ Real-time PCR machine. Scorpions ARMS assays use the specificity of ARMS combined with the signaling of Scorpions probes to generate data. Fluorescence readings were taken pre- and post-PCR. NTC refers to no template control.