The chemical grafting of polymers can be accomplished by “grafting to” or “grafting from” methods.2 According to the “grafting to” technique, end-functionalized polymer molecules react with complementary functional groups located on the surface to form tethered chains. The “grafting from” technique utilizes the polymerization initiated from the substrate surface by attached (usually by covalent bonds) initiating groups. Most of the grafting methods developed — “to” and “from” — require attachment of (end-)functionalized polymers or low molecular weight substances (e.g., initiators) to the substrate for synthesis of the polymer brush. Usually the coupling methods are relatively complex and specific for certain substrate/(macro)molecule combinations.

An alternative method for performing the attachment involves a macromolecular anchoring (mono)layer with activity towards both surface and functionalized (macro) molecules.3–6 The polymer is used for initial surface modification as well as generation of the highly reactive primary anchoring layer. When deposited on a substrate, the primary layer first reacts with the surface through formation of covalent bonds (Figure 1). The reactive units located in the “loops” and “tails” sections of the attached macromolecules are not connected to the surface.7 These free groups offer a synthetic potential for further chemical modification reactions and serve as reactive sites for the subsequent attachment of functionalized (macro)molecules. Figure 1.(a) Schematic representation of a reactive polymer attached to a substrate, (b) Chemical structure of the PGMA, (c) AFM image showing topography of PGMA layer deposited by dip-coating on silicon wafer. Size: 10×10 μM.

In our research (Figure 1b), macromolecules of poly(glycidyl methacrylate) (PGMA) were used to form the primary anchoring polymer layer. The versatile chemistry of the epoxy groups offered flexibility in the selection of necessary initiators/macromolecules to be attached to the surface. The attachment of PGMA to various surfaces was studied and it was determined that a uniform (Figure 1c) and homogeneous epoxy-containing polymer layer could be deposited on surfaces by dip-coating.1,8–13 The epoxycontaining polymer layer could be deposited as a monolayer on polymeric (PET, polyethylene, PP, PVDF, silicon resin, nylon) and inorganic (silica, glass, titanium, alumina, gold, silver) surfaces. The PGMA layers obtained were smooth and robust, suggesting that PGMA was chemically bonded to the surface. Subsequently, grafted layers were effectively generated from the PGMA platform using “grafting to” and “grafting from” methods.

A “grafting from” approach employing the PGMA primary layer was used to synthesize an effective macroinitiator for controlled/”living” Atom Transfer Radical Polymerization (ATRP).8,11,14,15 Initial surface modification was performed with a thin layer of PGMA. The ATRP macroinitiator was synthesized on the substrate surface by reaction between the epoxy groups of PGMA and the carboxy functionality of bromoacetic acid (BAA) (Figure 2, lower row). Polystyrene (Prod. No. 327816),4 poly(oligoethyleneglycol methacrylate)8,16 poly(N-isopropylacrylamide) (Prod. No. 535311),17 and poly(vinylpyridine) (PVP, Prod. No. 523356)18 brushes were synthesized on the PGMA/ BAA-modified substrates by ATRP. Following polymerization on the model silicon surface, the approach was developed for synthesis of the grafted layers on polymeric substrates. The surface of PET13 and PVDF18 were modified with polymer brushes synthesized via ATRP. Figure 2.Schematic representation of the “grafting to” (upper row) and “grafting from” (lower row) from the surface activated with PGMA.

Effective attachment of end-functionalized polystyrene (PS) and poly(ethylene glycol) (PEG, Prod. No. 202371) from a melt via the PGMA primary layer (to silicon wafer) by the “grafting to” approach was demonstrated as well (Figure 2, upper row).10,12,19 Additionally, the grafting approach was employed for attachment of polymers to polymeric films and fibers. Hydrophilic/polar (PEG, polyacrylamide, polyacrylic acid, PEI)13 and hydrophobic (polypentafluorostyrene)20 polymers were attached to PET, polyethylene, cotton, and nylon.

The universality of the anchoring layer approach was used for surface modification of a textile with a rough and hydrophobic layer chemically anchored to the PET fiber boundary.21 Basically, the modification process consisted of two primary steps. In the first step of surface modification, silica particles covered with an ultrathin PGMA reactive layer, were deposited on the fiber surface. During the second step, a hydrophobic polymer [poly(styrene-b-(ethyleneco- butylene)-b-styrene), SEBS] was grafted to the surface of the fibers and nanoparticles, and an ultrathin rough hydrophobic layer chemically anchored to the fiber boundary was generated.

The water repellency of the PET fabric was evaluated via water contact angle (WCA) studies. Figure 3 illustrates the wettability of the original PET fabric (Figure 3b), the fabric grafted with SEBS (Figure 3c), and the fabric modified with nanoparticles with subsequent anchoring of the SEBS monolayer (Figure 3d). Clearly, the increase in the WCA is attributed to the introduction of the grafted layer and double roughness, with the initial roughness coming from the fabric structure itself, and the secondary roughness derived from the layer of nanoparticles. Optically active, flexible polymer films with embedded chainlike arrays of silver nanoparticles (Ag NP) were fabricated utilizing a PGMA primary anchoring layer.22 Specifically, a patterned PVP-grafted polymer layer (polymer brush), deposited on a flat substrate, was used as a “master” to guide Ag NP assembly. After the ordered layer of nanoparticles was transferred into the PDMS film, the “master” was reused to fabricate the next film.

To create the patterned PVP layer on a flat substrate, the surface of a silicon wafer was modified with a monolayer of PGMA. Subsequently, part of the reactive surface thus created was protected by a polystyrene resist layer employing capillary force lithography (CFL). Thereafter, PVP grafting to the unprotected portion of the surface at low temperatures was performed in the presence of solvent vapor. Namely, carboxy-terminated PVP was anchored to the non-screened areas on the substrate at a temperature of 40 °C, which is approximately 60 degrees below the glass transition temperature (Tg) of both PS and PVP. A lower process temperature was necessary to preserve the PS pattern during grafting. High reactivity of the epoxy groups of the PGMA layer allows attachment of PVP chains and preserves the PS pattern. Ag NP were assembled into an array and transferred into a transparent polymer matrix. Atomic force microscopy (AFM) images of the PVP master, the Ag NPs assembled to PVP stripes and the UV-Vis extinction spectra of the Ag NP one-dimensional structures, embedded into the PDMS transparent matrix, are shown in Figure 4. The two maxima in the UV-Vis spectra represent two different plasmon modes: one is a longitudinal mode for which the collective electron oscillations were parallel to the orientation of the structure, and the other is a transverse mode with electron oscillations perpendicular to the structure.

Based on a primary PGMA anchoring layer, a hydrophilization procedure was designed for PDMS stamps for printing of the BaTiO3 precursor. Briefly, during the first stage of the modification procedure, PDMS films made of Sylgard 184 (Dow Corning) were treated with a low intensity, radio frequency plasma to create active surface functionalities. Subsequently, a thin layer of the PGMA was deposited on the surface via dip coating and annealed. The epoxy-functionalized PDMS film was modified via the “grafting to” method with a hydrophilic polymer. Poly(acrylamide-co-acrylic acid) was used as the surface modifier.

The low surface energy of the printing stamp is crucial for reliable wettability and transfer of the solution. The AFM surface morphology of the neat and modified PDMS stamp, as well as its wettability with a BaTiO3 precursor solution is shown in Figure 5. Wettability of the stamp was greatly improved after modification. Test-printing with modified PDMS stamps showed excellent pattern transfer, and durability. Moreover, the stamp was demonstrated to be reusable (at least 6 times) without significant deterioration of the transferred pattern. AFM images of the printed BaTiO3 precursor (Figure 6) showed excellent edge sharpness and pattern reproducibility. 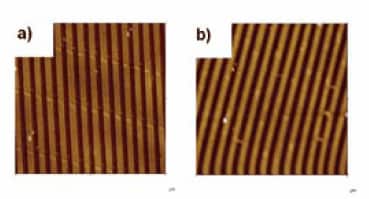 An overview of recent results in surface modification of various surfaces employing the macromolecular anchoring layer approach was presented. The approach was demonstrated to be useful as a virtually universal method for grafting functionalized polymer layers. The polymer grafting technique developed can be readily applied to surface modification of a wide range of inorganic and polymeric materials including flat surfaces, fibers and textiles. Functional materials were developed based on the macromolecular anchoring layer. Specifically, an ultrahydrophobic textile was made from PET fabric. An optically active array of Ag NPs was synthesized employing a patterned chemical brush synthesized on a PGMA layer. Finally, a BaTiO3 precursor (high dielectric constant insulator) was printed onto the surface with spatial resolution better than 1.5 micrometers.

The research presented has been supported by the National Science Foundation CTS-0456550 and DMR-0602528 Grants, ERC Program of National Science Foundation under Award Number EEC-9731680, and Grants M01- CL03, C05-CL01 and C04-CL06 from the Department of Commerce through the National Textile Center. Authors thank Dr. Viktor Balema and Dr. Shashi Jasty for collaboration. Igor Luzinov would like to acknowledge present and former members of his research group: K. Swaminatha Iyer, Yong Liu, John Draper, Karthik Ramaratnam, and Oleksandr Burtovyy, who conducted a significant fraction of the research presented.