E. coli and other coliforms are important indicator organisms for the presence of pathogens in food, occupational, and environmental safety applications, some of the most important areas of analytical microbiology.

Normal constituents of the intestinal flora of animals, coliforms are rod-shaped, Gram-negative, non-spore forming facultative anaerobes. They ferment lactose with the production of acid and gas when incubated at 35–37 °C. Although commonly found in lakes, rivers, swimming pools, and soil from faecal sources, in most cases coliforms do not cause illness. However, they are used as indicators for other pathogenic organisms of faecal origin. The most common genera of coliforms are Citrobacter, Enterobacter, Escherichia, Klebsiella, and Serratia.

Escherichia coli (Figure 1) is the best-known coliform and an important indicator of faecal contamination because it is found almost exclusively in faeces. Occasional outbreaks of food poisoning have been linked to certain gastroenteritis-causing E. coli strains, such as serotype O157:H7. E coli are rod-shaped bacteria, distinguished from most other coliforms by their ability to ferment lactose at 44 °C, and by their growth characteristics on certain media. Easy to culture, E. coli is often used in molecular biology. 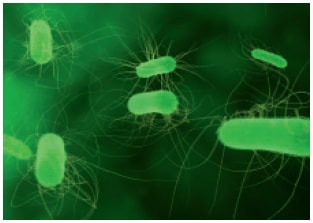 Microbiological media is used not only to grow microorganisms, but also to select or identify a particular type of microorganism based on some unique or distinctive aspect of its biochemistry. Most of this so-called “selective growth” media contain a protein source, often a hydrolysate of casein, and a fermentable sugar, like lactose or glucose. Occasionally an indicator, like neutral red or bromo cresol purple, is added to detect the acid produced by the fermentation process.

A new generation of selective media is available from us that employs chromogenic and fluorogenic substrates (Figure 2). These media indicate E. coli by the presence of β-D-glucuronidase (GUD) and other coliforms by the presence of β-D-galactosidase. GUD catalyses the hydrolysis of β-D-glucopyranosiduronic acid into the corresponding aglycones and D-glucuronic acid. GUD is present in 94–96% of E. coli strains, but is also found in some Salmonella, Shigella and Yersinia spp. (1-3). There is a wide range of media available that use different substrates for the detection of E. coli and coliforms (Table 1). The media are also supplemented with agents like bile salts, brilliant green, sodium lauryl sulphate, and other substances to enhance their selectivity. 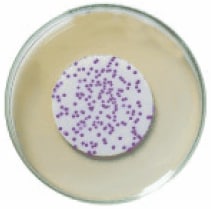 Figure 2.HiCrome™ M-TEC Agar for differentiation and enumeration of thermotolerant E.coli from water by membrane filtration technique. E.coli colonies appear blue because the chromogen, X-glucuronide, is cleaved by the enzyme β-glucuronidase.