Wnt signaling is critical in a myriad of biological functions, including cell fate determination, cell migration, cell polarity, organogenesis and neural patterning during embryogenesis1. Wnt proteins in the stem cell niche control the behavior of various types of stem cells maintaining them in self-renewing state. The extracellular Wnt proteins stimulate several signal transduction cascades, which are classified into canonical or Wnt/β-catenin pathway and non-canonical or β-catenin-independent pathway2. Wnt/β-catenin signaling is well studied and the current review focuses on components and signaling mechanism of β-catenin dependent signaling.

Wnt is ubiquitously expressed in all metazoan animals. There are 19 mammalian genes that code for cysteine rich Wnt proteins, falling into 12 conserved Wnt subfamilies. Wnt proteins are globular, approximately 40 KDa; the amino-terminal domain majorly consists of α-helices with five disulfide bridges while the carboxy-terminal domain is dominated by two β-sheets with six disulfide bonds. Wnt proteins undergo post-translational modifications before they are released into the extracellular cytoplasmic milieu. Wnt is glycosylated and palmitoylated by endoplasmic reticulum protein called Porcupine3 (Porc) and transported to the plasma membrane by Wntless proteins (Wls). Loss of either Porc4 or Wls5 prevents the secretion of Wnt proteins, leading to birth defects. Wnt proteins are known to act in contact dependent manner as well as across distant tissues. Wnt/β-catenin pathway is the result of a prominent close-range signaling along with beta-catenin6.

b) Receptors of Wnt proteins

Wnt lipoprotein binds to a receptor complex that comprises of Frizzled (Fz) and lipopolysacharide like receptor protein 5/6 (LRP5/6). The frizzled protein has seven-transmembrane domains and a large extracellular N-terminal cysteine rich domain that provides platform for Wnt binding. The interaction between Wnt and Fz protein is not specific; a single Wnt protein can bind to multiple Fz proteins. Unlike Fz protein, LRP6 has specific binding sites for different classes of Wnt proteins7. Ligand (Wnt) binding brings conformational changes within the receptors (LRP6), activating kinases like GSK3 and CK1γ8. Both GSK39 and CK1γ10 eventually phosphorylate several signaling components of Wnt pathway, including β-catenin, Axin, APC and LRPs. Little is known about the role of Fz in Wnt pathway. Upon the signal reception, the cytoplasmic domain of Fz receptor interacts with Dishevelled (Dsh) proteins and facilitates the interaction between LRP tail and Axin. Both Axin and Dsh proteins bind each other through DIX domain and mediate the formation of LRP-Fz dimers.

The Wnt/β-catenin signaling is modulated by extracellular ligands listed in the table below.

The stability of cytoplasmic β-catenin is critical for the signaling output of Wnt signaling. β-catenin (781 amino acids) consists of central region of 141-664 amino acids made up of armadillo repeats, flanked by distinct N- and C-terminal domains (NTD and CTD). Although, the NTD and CTD are structurally flexible, the central region is rigid and serves as interaction platform for binding proteins in cytosol and in the nucleus. The stability of β-catenin depends on what is now termed as the “cytoplasmic destruction complex” comprising Axin, two tumor suppressor proteins APC and WTX and two constitutively active kinases, CK1α/δ and GSK3α/β.

In the absence of Wnt, the fate of β-catenin is determined by kinases, CK1 and GSK3.

In the presence of Wnt ligands a signaling cascade is initiated. 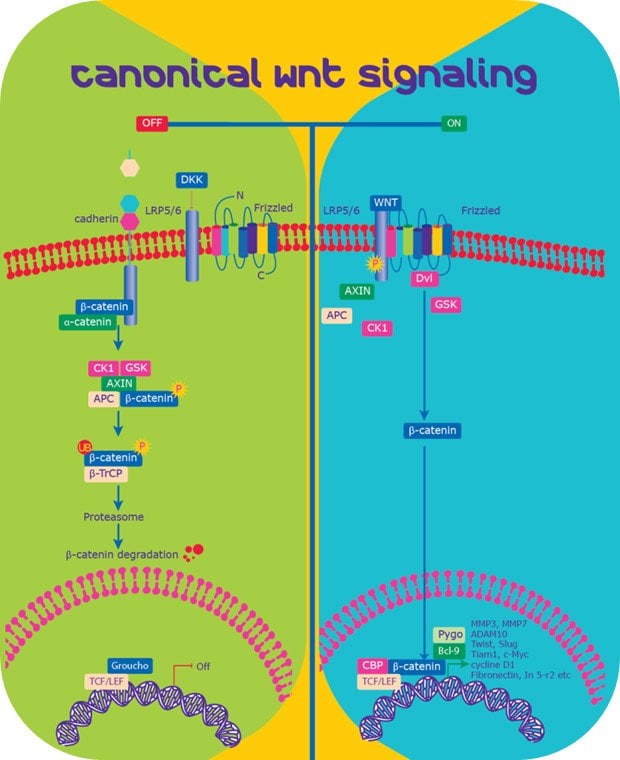 The genes regulated by Wnt signaling include those of transcription factors, ECM components, cell adhesion proteins, enzymes and hormones (Table 2).

Table 2Target genes of β-catenin and their modulation

Among the wide spread effects of Wnt signaling on target cells, the role in regulating the plasticity of stem cells drawn particular interest.

Wnt signaling is conserved throughout the evolution and there is a strong correlation between deregulated Wnt signals and multiple disease conditions. Wnt proteins are active in stem cells of neural, mammary and embryonic tissues. It has been reported that while defined factors such as LIF, Basic FGF, Hedgehog, BMP-4 maintain embryonic stem cells in undifferentiated state, Wnt proteins play a role in ES cell control. Interplay of Wnt proteins and other factors including small molecules like retinoic acid for maintenance, self-renewal and differentiation of stem cells is a prominent area of research that has vast implications in the way stem cells are shaping up the current disease therapy options.

Explore high quality Wnt recombinant proteins for your research use