In the interest of food safety, pesticide residue testing is done in many countries for both domestically produced and imported agricultural products. Baby food is an area of high interest due to the ramifications of exposing infants and young children to toxins, especially during the critical years of brain and nervous system development. Limiting exposure to pesticides is considered critical in maintaining a safe, healthy diet. In the United States, tolerance limits for agricultural products that could be used for producing baby food are set by the USEPA. Testing of these commodities is then performed by the USDA under its annual “Pesticide Data Program” (PDP). Baby food, in particular, has been included in testing conducted since 2010, with the last round conducted in 2013.1 The European Union (EU) has set maximum residue limits of 4 to 8 μg/Kg for several pesticides in baby food, and specifically listed others as prohibited for use entirely in the production of agricultural products intended for this use.2

Sample preparation methods for the analysis of pesticide residues in baby food have included QuEChERS and QuEChERS-based extraction, solid phase extraction (SPE), and accelerated solvent extraction (ASE).3,4,5 With all of these techniques, a separate cleanup step is often required after the initial extraction. Solid phase microextraction (SPME) has been used widely since its commercialization in the 1990’s for a wide variety of matrices and analytes. However, its application to analyses such as pesticide residues in food matrices has been somewhat limited. The presence of sugars, fats, proteins, and other macromolecules in many foods presents a challenge for SPME. Many pesticides do not have sufficient vapor pressure to be extracted from headspace, and thus require the SPME fiber to be immersed directly in the sample. These compounds can then stick to the fiber coating causing fouling. If they are transferred to the GC during the desorption step, they can contaminate the inlet and analytical column. These drawbacks have limited the use of SPME for immersion extraction of pesticide residues from heavy matrices such as baby food. A new technology in fiber coating recently developed by Silva and Pawliszyn at the Univ. of Waterloo incorporates the use of an overcoating to protect the SPME fiber. They have successfully used polydimethylsiloxane (PDMS) to overcoat a PDMS/divinylbenzene (DVB) fiber. The resulting fiber proved to be more physically robust and resistant to chemical fouling than a non-overcoated fiber of the same chemistry.6,7

Pureed prune baby food was obtained from a local grocery store. For accuracy and reproducibility studies, sample was spiked at 10 ng/g with the pesticides listed in Table 1. These pesticides were selected due to their inclusion in EU directive 2006/125/E for baby food.² After spiking, samples were equilibrated for a minimum of 3 hours prior to extraction and analysis. This time was to allow for any matrix binding between sample and analytes to occur. The final SPME method is summarized in Table 2. SPME was carried out using an X-Y-Z autosampler with a heated agitator. The prune samples were extremely viscous, and required dilution prior to SPME. More detail regarding optimization of extraction parameters will be given in the “results and discussion” section. Analysis was performed by GC/MS on a single quadrupole instrument operated in selected ion mode (SIM). One quantitation and two qualifier ions (Table 1) were monitored for each pesticide. The specific GC conditions used are listed in Table 3. Spiked samples were quantitated against a multi-point calibration curve prepared in prune matrix, equilibrated a minimum of three hours, and extracted by SPME. No internal standards were used.

During SPME method development, the following parameters were optimized using the OC-SPME fiber:

In SPME, salt is often used as a sample additive to increase ionic strength and to help drive analyte equilibrium towards the fiber. It was found that the addition of salt did not increase pesticide response; however it did provide better reproducibility. Figure 1 shows a comparison between the %RSD values in average responses obtained for sets of n = 3 spiked replicates (10 ng/g) extracted with and without addition of salt. Lower %RSD values were obtained for all pesticides using salt except hexachlorobenzene (which was still <15%). It is possible that the salt, in addition to shifting analyte equilibrium towards the fiber, is helping to disrupt binding between the pesticides and the prune matrix.

Temperature Incubation and extraction of the samples was carried out in the same heated agitator on the SPME autosampler, thus the same temperature had to be used for each of these steps. Initial experiments evaluating accuracy and precision of the SPME method using the OC-SPME fiber were carried out using a temperature of 30 °C. This temperature was selected based on previous work done with grapes.7 However when applying the SPME method to matrix-matched calibration standards from 1 to 20 ng/g, half of the pesticides showed issues with linearity (r² values of less than 0.990). Endrin and cadasufos showed no response from the lowest calibration standard (1 ng/g), and demeton-S-methyl had flat response across the entire calibration range. To improve this, a higher incubation/extraction temperature was evaluated to determine if it would help to further disrupt matrix/analyte binding, and increase extraction kinetics. Table 4 shows a comparison between incubation/extraction temperatures of 30 °C and 50 °C for two sets (each n=5) of spiked prune samples. For each set, the results of the 2-20 ng/g matrix matched calibration curves, along with accuracies and reproducibilities for spiked baby food samples are shown. The increased temperature of 50 °C resulted in better linearity for the matrix-matched calibration, as is indicated by the r² values of > 0.990 for all but one pesticide. The increased temperature resolved the response issues described earlier for endrin, cadasufos and demeton-S-methyl, allowing for quantitation of the later in the spiked samples. Since SPME is not an exhaustive extraction technique such as SPE, accuracy is reported for spiked samples rather than recovery. Increasing incubation/extraction temperature resulted in better method accuracy and reproducibility, indicated as lower % RSD values.

The pureed prune baby food contained sugars and pigments. It was expected that immersion of an SPME fiber into this matrix would leave residual matrix behind. A wash step was incorporated into the method after extraction and prior to desorption which consisted of dipping the fiber into deionized water. The wash time was set to ensure cleansing of the fiber without removing the analytes. Initially, studies were conducted with varying post-extraction wash times from 10-30 seconds. There was no decrease in response observed with increasing wash time. Thus, 30 seconds was chosen to provide thorough cleansing of the fiber.

The results obtained for the spiked prune samples using the OC-SPME fiber were then compared to a standard, non-overcoated version of the PDMS/DVB fiber. The same SPME method parameters were used, including the post-extraction wash. The results obtained from extraction of n = 5 replicates of spiked pureed prune baby food are summarized for both fiber types in Figure 2. For pesticide residue methods in foods, the generally accepted range for recovery is 80- 120%. This was translated to the SPME method as the target range of accuracy, and is indicated in yellow in Figure 2. Precisions are indicated with error bars for each pesticide. Accuracy was generally better using the OC versus the standard fiber; 10 of the 12 pesticides fell within the target accuracy range of 80-120% (with nitrofen barely outside), while 6 of 10 fell within this range with the standard fiber. The most polar pesticide, demeton-S-methyl, was difficult to extract using the SPME method. Reproducibility was also better using the OC fiber. The two most hydrophobic pesticides studied, aldrin and dieldrin, showed significant improvement with regards to measurement accuracy and reproducibility using the OC fiber.

A comparison of the TICs generated from GC/MS-SIM analyses of the pureed prunes baby foods using both fiber types is shown in Figure 3. While SPME generally does not generate a great deal of background, differences were noted between the two fibers. Higher background was observed in the pesticide elution range with the standard fiber; most notably from 29-31 and 33 to 35 minutes. This indicates that less sample residue remained behind after the wash step on the OC fiber than the standard fiber. 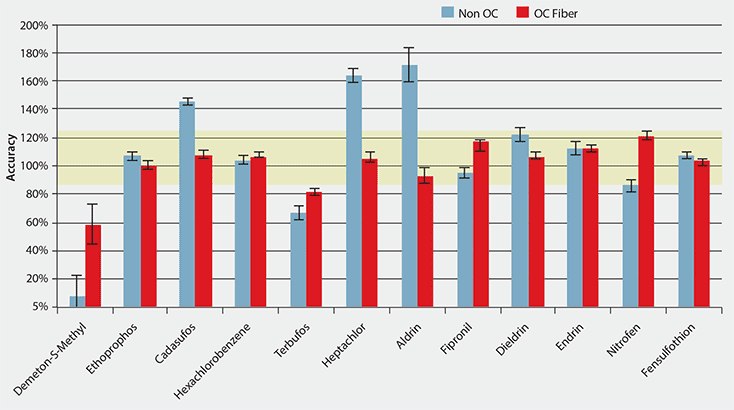 In addition to providing a barrier to macromolecules present in matrix, another objective of the overcoating is to make the SPME fiber more durable. Fiber durability was tested by performing repeated extractions of spiked pureed prune baby food, monitoring pesticide response, and examining the physical attributes of the fiber before and after the test sequence. Performance over the course of 25 sample extractions is shown for several pesticides in Figure 4. Response over the course of the test sequence is shown normalized to the first extraction. Response was steady using OC fiber, as indicated by the %RSD value of < 10% for response over the course of the extractions. The standard, non-overcoated fiber (designated as “non-OC” in the figures) showed a decline in response. With the exception of demeton S-methyl, response for the remaining pesticides declined more rapidly with the standard fiber than the OC fiber. The physical condition of the OC fiber after testing was fairly good, with only patches of discoloration visible (Figure 5). The standard fiber became completely detached from the assembly and was lost at the end of the testing, and thus could not be physically evaluated. 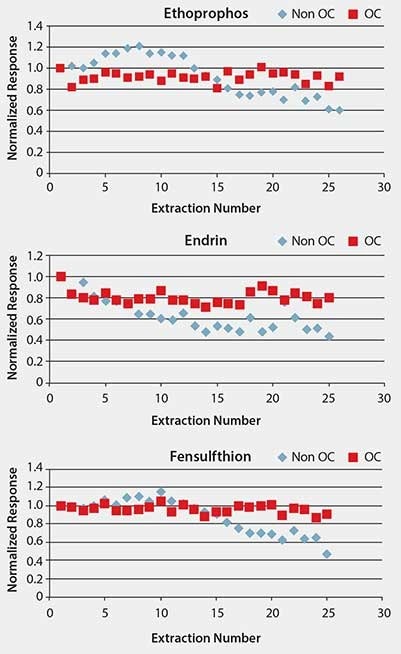 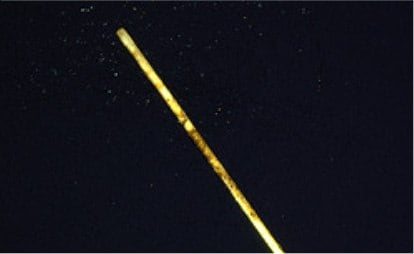 A direct immersion SPME method using a new overcoated SPME fiber was developed for the extraction of pesticides from pureed prune baby food. Dilution of the samples in a buffered salt solution, and application of heat during extraction improved method accuracy and reproducibility. A post-extraction wash step was incorporated to help remove residual sample from the SPME fiber prior to desorption. Compared to a standard, non-overcoated fiber of the same chemistry, the method using the overcoated PDMS/DVB fiber showed better accuracy, reproducibility, and lower GC/MS background. In addition, as seen with repeated sample extractions, the overcoated fiber provided more stable response and was more physically durable.