Adsorbent SPME fibers with Carboxen® or divinyl-benzene (DVB) coatings on a Nitinol core have been introduced. In the provided study, the Nitinol core fibers show an improved reproducibility and mechanical stability vs. their predecessors on fused silica cores while maintaining inertness and analyte recovery, enabling direct implementation into existing methods.

Late 2019, saw the introduction of Supelco® adsorbent fibers with a Nitinol core. Compared to absorbent (“film”) type coatings, adsorbent (“particle”) type coatings for SPME fibers facilitate multiple interaction/mechanisms between sample analytes and the coating, often improving analyte retention/sensitivity. However due to multiple materials used in particle type SPME fiber coatings, such as adsorbent and binder/adherent, variability between fibers can increase. Nitinol core coated fibers, contained in standard stainless steel (SS) assemblies, are not only more durable but also highly reproducible. In this article, the various factors likely to cause variability such as the coating process, testing process, inertness, raw materials, and durability are discussed by comparing coatings on fused silica cores and Nitinol cores.

The new proprietary coating process also results in an even distribution of a highly bonded coating around the Nitinol core, further contributing to the improvement of fiber reproducibility. Further, the reproducibility of performance of newly made fibers with a Nitinol core was tested against historically available fibers with a fused silica core.

The QC testing of a fiber should be a good measurement of the performance of the fiber coating. The components in the test mix should measure various characteristics of the adsorbents and the testing method must be reliable.

To validate the method, an autosampler with fiber exchange capability was used. This capability allowed for multiple extractions per fiber (4) and also the test of multiple fibers per lot, in an automated manner. The four extractions from four samples per fiber offered the advantage of establishing precision in area counts of four extractions, for each analyte.

Table 2 shows the average of the precision of repeated extractions from over 200 fibers (800 extractions). Fibers used had PDMS/DVB and Carboxen®/PDMS coatings on fused silica and Nitinol cores.

The results indicate that the method is highly reproducible and reliable.

Fourteen fiber coating lots of Carboxen®/PDMS phase on Nitinol core and fourteen coating lots on fused silica core were evaluated with the automated QC testing method. For each core, the RSD per analyte was determined based on the total extractions of the fibers per given lot. The overall RSD per given lot was the average value of the 4 analyte RSD values. The intra-lot RSD values for all the lots of each core type were averaged to obtain the overall intra-lot values per core type. Figure 2 shows the results of variability between the fiber cores for the PDMS/DVB coating. The calculations were obtained from eight fiber lots on fused silica and eight lots on Nitinol cores following the same procedures that were used to calculate the Carboxen®/PDMS coating variability. 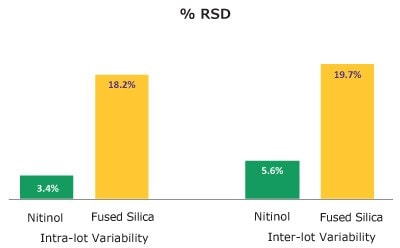 For a fiber to deliver reliable, reproducible results, and exhibit only desired analyte-coating interactions, the core must be inert. An active core can catalyze the breakdown of some analytes during the desorption process. This can not only decrease the response of the analytes but can also create artifacts that were not present in the original sample. For example, alkyl halides tend to be susceptible to breakdown, especially when the desorption temperature is above 250 °C. The higher the temperature the greater the breakdown. Typically, the breakdown is further enhanced by the presence of iron that catalyzes the reaction.

Fused silica is typically used as a benchmark of high inertness, and thereby the coatings on fused silica cores were compared to the coatings on the Nitinol core. Nitinol is a combination of titanium and nickel that makes up over 99.99% of the composition. There are small amounts of trace metals also present, but in low or sub ppm levels. The material is used in the medical industry to produce highly inert devices such as stents.

In this study, the comparison of cores was carried out for the extraction and desorption of haloalkanes. In most cases, the breakdown of an alkyl halide takes place with a loss of an HCl or HBr molecule, forming a non-saturated-haloalkene. Since there were no haloalkenes spiked in the samples, the presence of haloalkenes in the analysis were the result of breakdown of the haloalkanes. Both the Carboxen®/ PDMS coating and the PDMS/DVB coating were compared on both fiber cores. Figures 3 and 4 show the average percentage of breakdown by core type with Carboxen®/PDMS and PDMS/DVB coatings, respectively. The average is based on four extractions per fiber coating and core type.

The results show that both core types exhibit similar behavior and the primary cause of the breakdown of the analytes is the desorption temperature. Both core types appear to be inert.

The coating materials used for the Supelco® SPME fibers are manufactured in-house. This enables complete control of the materials used in the production of the coatings. When a manufacturer purchases particles or adsorbents from an outside vendor, they may have little control on the specifications and manufacturing process of the materials received. This could result in more variable coatings between lots of raw materials. Since the introduction of the Nitinol core fibers, additional specifications have been added to the adsorbent particles and polymers. The additional specifications ensure that the raw materials are even more consistent between manufacturing lots and produce fibers with less inter-lot variability.

Those currently using adsorbent coatings on a fused silica core may have concerns about fiber performance when switching to Nitinol. Our testing has shown that there is little difference in analyte recovery between the two core types with the same coating. To demonstrate the similarity in recoveries, a group of alkyl halides was extracted four times with the two adsorbent coatings on both fiber cores. Table 3 shows the average responses obtained and the percent difference between the fiber cores for each coating type.

The difference in analyte responses between the two core types is small; similar to what would be expected between fibers on the same core type, but of different coating lots.

A more durable fiber made with a more rugged coating process, reduces the chance of breakage and damage, and increases the number of extractions that can be carried out. The Nitinol core fibers are very flexible and mechanically stable. Figure 5 shows a picture of the fiber flexed at a 90° angle without breaking. The fibers have even been flexed 180° until they touched the inner rod without any breakage. A fused silica fiber will typically break when flexed between 30°-45°. However, irrespective of the flexibility of Nitinol core fibers, it is recommended to keep mechanical stress to a minimum. 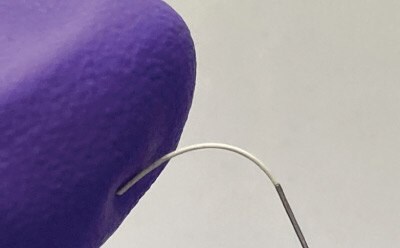 Figure 5.Flexing of a Nitinol fiber at a 90° angle.

Any damage to the fiber coating results in an increased fiber variability. The proprietary coating process creates an extremely well bonded coating, less prone to easy damage, and resulting in more reproducible results over time.

The adsorbent fiber coatings on the Nitinol core have been shown to be highly reproducible due to the following reasons:

The analyte recoveries between core types for the same coating are similar.

These results suggest that users of adsorbent fibers on fused silica cores can easily transfer their methods for the same coatings onto the Nitinol core versions and take advantage of the improvements.

The full SPME portfolio and further information resources, like the Brochure “SPME for GC Analysis” with information on the technology, method development, and troubleshooting can be found here.