Extraction and Analysis of PAHs from Grilled Hamburger

Polynuclear aromatic hydrocarbons (PAHs) are compounds consisting of two or more fused aromatic rings. These compounds are lipophilic in nature, and are ubiquitous in the environment as a result of the incomplete combustion of organic matter. Those with five or more rings in their structure are usually referred to as “heavy” PAHs. These heavy PAHs are often the focus of toxicity studies, and some have been found to be carcinogenic and mutagenic1. In the case of grilled meats, PAHs are formed and adhere to the meat when fat and juices come into contact with an open flame2. In the United States, there are currently no guidelines regarding the consumption of foods containing PAHs2, however in 2011, the European Union (EU) adopted regulation 835/2011 that established the maximum allowable levels in various foodstuffs. In heat treated meats, this maximum was set at 5 µg/kg of benzo[a]pyrene, and 30 µg/kg total as a sum of four PAHs: benzo[a]pyrene, benzo[a]anthracene, benzo [b]fluoranthene, and chrysene3.

Since PAHs are lipophilic, extraction from fatty samples such as hamburger meat will subsequently co-extract a significant amount of matrix. If GC-MS analysis is used, fatty matrix will prematurely foul the inlet, column and detector. Backflush of heavy constituents can be used to prevent contamination of the GC column and detector, but it will not prevent residue buildup in the inlet liner. Consequently, sample cleanup is imperative if GC analysis is to be performed. Traditional methods of cleanup include gel permeation chromatography (GPC), and fractionation on large columns containing silica gel, alumina, or Florisil®. In this application, a simple extraction and cleanup method was developed for 28 different PAHs from grilled hamburger meat using the “Quick, Easy, Cheap, Effective, Rugged and Safe” (QuEChERS) approach. Subsequent cleanup was done using several different sorbents, including new zirconia-based Z-Sep and Z-Sep+ materials. Analysis was performed by GC-MS in selected ion mode (SIM) using an SPB®-608 capillary column. This column provided the selectivity and efficiency necessary to resolve several isomeric sets, including benzo[b], [j] and [k] fluoranthene. A shorter, narrow-bore dimension was chosen to reduce analysis time while maintaining high efficiency.

Hamburger grilled to well-done was ground and spiked at 100 ng/g with a mixture of PAHs. An internal standard solution containing naphthalene-d8, fluoranthene- d10, and perylene-d12 was then added. After 10 minutes, the mixture was subjected to the extraction and cleanup procedure outlined in Table 1. Acetonitrile was chosen as the extraction solvent because it presented a good balance between maximizing extraction of the PAHs and minimizing extraction of the fatty matrix. For cleanup, four different sorbents were evaluated: (1) Z-Sep+, 500 mg (2) Z-Sep+/PSA, 500 mg/400 mg (3) Z-Sep, 500 mg, and (4) PSA/C18, 400 mg/150 mg. Three replicate spikes and an unspiked hamburger sample were processed using each cleanup. GC/MS analysis was done in selection ion mode (SIM) using the conditions described in Table 2. Quantitation was done against a 5-point calibration curve prepared in acetonitrile.

Background Removal
Background reduction was evaluated by analysis of the cleaned extracts by GC-MS in full scan mode. The Z-Sep cleaned extract had the lowest background (Figure 1). The large peak eluting between 12 and 13 minutes was identified as a sterol. In SIM mode, it did not interfere with the ions used for quantitation of the PAHs eluting in that region. The chromatogram of PAHs in grilled hamburger after cleanup with Z-Sep is shown in Figure 2. 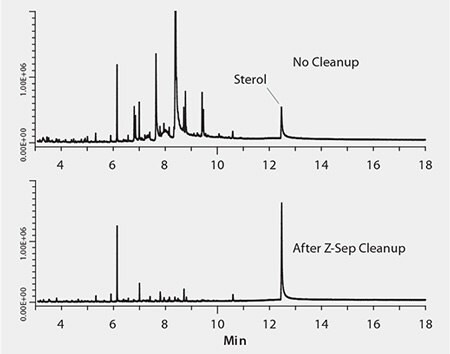 Figure 1. GC-MS Background Before and After Cleanup with Z-Sep Figure 2. GC-MS/SIM Analysis of Grilled Hamburger, Spiked at 100 ng/g with PAHs, After Cleanup with Z-Sep

PAH Recoveries
A summary of the recoveries after cleanup is presented in Figure 3. PAHs were detected in the unspiked hamburger, and these values were subtracted when determining recoveries for the spiked samples. %RSD values were below 10 in most cases, indicating good reproducibility for the extraction method. The best overall recoveries were obtained using Z-Sep cleanup. The PAHs from pyrene onward showed lower recoveries after cleanup with sorbents containing C18, including Z-Sep+. Z-Sep is a zirconia coated silica (zirconia on silica) and does not contain any C18, while Z-Sep+ is a dual bonded C18 and zirconia silica.

There was some matrix interference observed in the first 1/3 of the GC-MS analysis. This prevented accurate integration of the first internal standard, naphthalene-d8, so it was not used for quantitation. Instead, only fluoranthene-d10 and perylene-d12 were used. The SPB- 608 column was able to resolve all isomeric sets except triphenylene and chrysene; thus they are reported together.

A QuEChERS approach was effectively used to extract PAHs from grilled hamburger meat. For extract cleanup, it was found that sorbents containing C18, including Z-Sep+, gave reduced recoveries for PAHs with >4 rings in their structures. Z-Sep, a zirconia coated silica which does not contain C18, yielded the highest average recoveries. Z-Sep also produced extracts with the lowest GC-MS background. The SPB-608 column provided the selectivity necessary to resolve all but one isomeric set. The dimensions used allowed the GC run to be completed in <20 minutes.