HomeChemical Analysis for Food and Beverage TestingAnalysis of Vitamin D in Milk and Infant Formula using UHPLC/MS/MS per AOAC Method 2011.11

Fortification of milk, dairy products, infant, and adult nutritionals with vitamin D is required in many countries to provide additional dietary vitamin D. The fortification of milk in the USA, for example, is done at 400 International Units (IU) per eight ounces of milk. The recently adopted AOAC method 2011.11 describes the procedure for the analysis of vitamin D in fortified infant formula. This method was used in the current work to measure vitamin D in the fortified whole milk and in an infant formula sample. Two forms of vitamin D are recognized: vitamin D2 or ergocalciferol, and vitamin D3 or cholecalciferol. Although both forms may be present in the fortified food, vitamin D3 is more commonly used for fortification of dairy products. Vitamin D hydroxymetabolites can also be present in food products at low levels. While quantitative analysis was performed for vitamins D2 and D3, the samples were scanned for the presence of 25- hydroxy metabolites.

AOAC method 2011.11 was followed for analysis of vitamin D in both milk and infant formula. Vitamin D2 and D3 standards and their deuterated analogues were used. The UHPLC column was Titan™ C18, 10 cm x 2.1 mm packed with 1.9 µM particles. The HPLC method was adopted from the standard AOAC method, including mobile phases, gradient, and flow rates. Baseline separation between vitamin D3 and D2 peaks, and between all vitamins and matrix component peaks was obtained on the Titan C18 UHPLC column. Analysis of vitamin D was done using MS/MS with APCI detection. MS transitions used in this study are shown in Table 1. 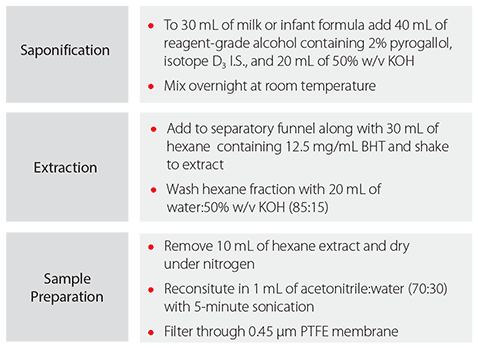 Chromatography of the vitamin D and hydroxyvitamin D compounds is presented in Figures 2 and 3, respectively. Analyses of vitamin D2 and D3 in extracted milk and infant formula are shown in Figures 4 and 5, respectively. No Vitamin D2 was found in infant formula while a low amount of D2 was found in milk. Concentrations of Vitamin D3 in milk and infant formula were found to be close to the expected fortification levels of at least 4.2 IU/mL (Table 2). No hydroxyvitamin D forms were found in samples of either milk or infant formula. The lowest level for calibration curve was 0.2 IU/mL which would correspond to 0.5 ng of vitamins per mL of milk. Figure 4. UHPLC/MS Analysis Vitamin D in Milk on Titan C18 Vitamin D3 is shown as 385/259 parent/daughter transition and vitamin D2 is shown as 397/125 transition using the same Y-scale. Conditions as in Figure 2.

Figure 5.UHPLC/MS Analysis Vitamin D in Infant Formula on Titan C18 Vitamin D3 is shown as 385/259 parent/daughter transition and vitamin D2 is shown as 397/125 transition using the same Y-scale. Conditions as in Figure 2.

Presented here is a method for the determination of nutritionally important vitamin D forms as standards, and extracted from milk and infant formula after saponification following AOAC method 2011.11.