Dendrimers and dendrons are highly branched polymer structures with a precise distribution of functional groups. In contrast to their linear analogues, they are monodisperse in nature and present no batch-to-batch inconsistency. A broad range of sophisticated applications have capitalized on these dendritic materials including catalysis, optics and nanomedicine.1 Specifically, in the nanomedicine field, great efforts have been devoted towards the design of selective drug delivery systems and efficient imaging probes.2 For this purpose, dendrimers present significant advantages over linear polymers: they are precision nanomedicines carrying an exact number of drugs arising from their controlled synthesis and monodisperse nature; they display predictable and repeatable pharmacokinetics; they can be tuned to present optimal properties such as biodegradability, low toxicity and water solubility; they exhibit higher loading capacity; and they can be designed to be multipurpose (e.g. therapeutic, diagnosis, targeting, etc.).

A promising family of dendritic macromolecules for biomedical applications is based on the 2,2-bis(methylol)propionic acid building block.3, 4 These highly branched aliphatic polyesters with multiple surface functional groups are accompanied with features such as low or no in-vitro toxicity, no specific in-vivo organ accumulation, no immunogenic profile and are biodegradable under physiological conditions, all of them highly valuable properties for biomedical applications.5, 6 Moreover, the commercial availability of both the bis-MPA monomer and the dendritic macromolecules, and variations in commercially available structures (hyperbranched polymers, dendrimers, dendrons, hyperbranched PEGs) has led to increase use for biomedical applications. The dendritic family of bis-MPA scaffolds has proven to be an efficient tool for delivery of both physically and covalently attached drugs. The preparation of drug unimolecular carriers based on bis-MPA polyester scaffolds is described herein.

With the wide range of dendritic polyesters based on bis-MPA currently available on the market, straightforward one-step functionalization protocols facilitate the development of sophisticated and bioactive dendritic probes. Fluoride-Promoted Esterification (FPE) through imidazolide-activated compounds acts as a powerful tool for the modification of highly functional polymers under benign and green chemistry conditions.7 Through this protocol, the hydroxyl4 or carboxyl8 periphery of the dendritic scaffolds can be easily functionalized with a large amount of moieties (drugs, targeting moieties, dyes, etc.).

This protocol is exemplified in the ibuprofen-functionalization of a third generation bis-MPA dendrimer.

Step 1 – Activation: In the first step, the molecule of interest (in this particular example, ibuprofen) containing a carboxylic group is activated with 1 equivalent of 1,1´-carbonyldiimidazole (CDI) in EtOAc at 50 °C for 1 h. The activation can be easily monitored by 1H-NMR, depicting three new signals around 7.00, 7.40 and 8.10 ppm assigned to the imidazole-activated compound (Fig. 1A). Moreover, one imidazole molecule is released in this step, which appears at 7.10 and 7.67 ppm.

Step 2 – FPE: In the second step, the Fluoride-Promoted Esterification of the hydroxyl-functional dendrimer is performed in-situ at 50 °C with the assistance of CsF. The reaction conditions are summarized in Table 1. The completion of this step is monitored through MALDI-TOF, showing a unique peak in the spectrum (Fig. 2A). The excess of activated acid is quenched by stirring with water until the disappearance of the signals assigned to the imidazole-activated compound (Fig.1B).

Step 3 – Purification: In the third step, the by-products are washed out with NaHCO3 10% to obtain the pure functional dendritic molecule in 95% yield (Fig. 1C and Fig. 2A).

Note 1: FPE is a robust protocol which proceeds in short times and high yields, and allows the functionalization of highly dense dendritic molecules, as demonstrated by the synthesis of TMP[G6](acet)96 with 96 moieties on the surface (Fig. 2B). 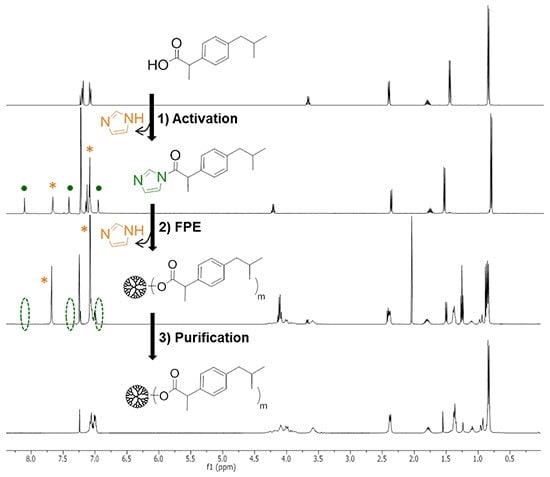 Figure 1. Example of FPE protocol monitored by 1H-NMR to prepare the homofunctional dendrimer TMP[G3](ibu)24, carrying 24 molecules of the drug ibuprofen.

Example 2 – Bifunctional Dendrimers through Coupling of Dendrons via Click Reactions

The synthesis of a block heterofunctional dendrimer HFD(e):Gx(B)m-b-Gy(C)n can be easily achieved through the covalent attachment of two dendrons containing complementary clickable moieties in the core such as azides (-N3) and acetylenes (-C≡CH) or thiols (-SH) and alkenes (-CH=CH2).9 Click chemistry is based on a set of highly reliable and synthetically simple chemical reactions known to proceed in a wide range of solvents, including organic and aqueous conditions with high conversions in short reaction times. In the case of bis-MPA dendritic scaffolds, Click reactions have been used for the successful conjugation of bioactive moieties such as PEG,10 saccharides,11, 12 peptides, and antibiotics.12 The most common protocols of click reactions are herein exemplified in the synthesis of bis-MPA block heterofunctional dendrimers (HFD):

Step 1 – CuAAC reaction: To a THF:water solution of the dendrons, freshly prepared water solutions of CuSO4∙5H2O and sodium ascorbate are added. The reaction conditions are summarized in Table 1. The reaction proceeds at room temperature until completion, which is monitored through 1H-NMR and MALDI-TOF (Fig. 3). The spectra depicts the disappearance of the acetylene peak at 2.57 ppm and the appearance of the triazole peak at 8.08 ppm, and the –CH2-N signal is displaced from 3.28 (azide nitrogen) to 5.29 (triazol nitrogen).

Step 2 – Purification: After purification by column chromatography, the bifunctional dendrimer HFD(e):G4(OH)16-b-G4(acet)8 is isolated in 91% yield and displays a single peak at 4026.1 in MALDI-TOF.13

Note 1: Alternative protocols can be performed in organic solvents using other copper catalyst such as [Cu(PPh3)3Br]. 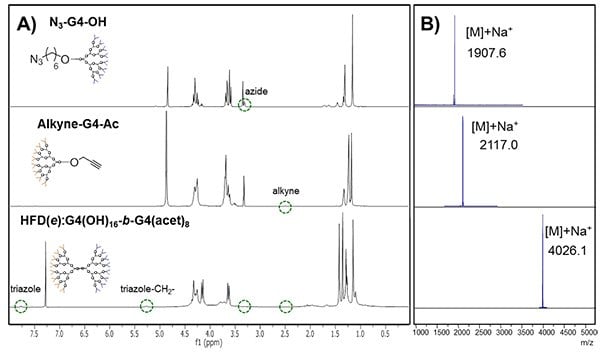 Figure 3.CuAAC coupling of fourth generation dendrons to obtain the block heterofunctional dendrimer HFD(e):G4(OH)8-b-G4(acet)4 , monitored by A) 1H-NMR and B) MALDI-TOF.13

Step 1 – UV-initiated TEC reaction: To a deoxygenated DMF solution of the third generation dendrons, the photoinitiator 2,2-dimethoxy-2-diphenylacetophenone is added and the mixture is irradiated with UV light at 365 nm for 60 minutes. The reaction conditions are summarized in Table 1. The reaction is monitored through 1H-NMR and MALDI-TOF (Fig. 4). The spectra depict the disappearance of the alkene signals at 5.25-6.00 ppm and the displacement of the -CH2-S- signal from 2.80 to 3.17 ppm when the reaction is complete.

Step 2 – Purification: After purification by column chromatography, the resultant bifunctional dendrimer HFD(e):G3(OH)8-b-G3(acet)4 is isolated with 76% yield and displays a single peak at 1945 in MALDI-TOF.14 Figure 4.UV-initiated TEC coupling of third generation dendrons to obtain the block heterofunctional dendrimer HFD(e):G3(OH)8-b-G3(acet)4 , monitored by A) 1H-NMR and B) MALDI-TOF14

The combination of these one-step functionalization protocols allows the straightforward development of advanced dendritic materials. Typical reaction conditions for the modification of the core and the periphery of the dendritic scaffolds are summarized in Table 1.

Dendritic polymers including monodisperse dendrimers and dendrons are the ultimate precision polymers per definition. They are defined as highly branched scaffolds with a large functional group density that can carry a large payload of active drugs. Due to their structurally flawless nature, dendrimers and dendrons belong to the most advanced drug delivery carriers in which their batch-to-batch consistency is envisioned to play a crucial role in tomorrow’s therapeutic breakthroughs. From the great number of available dendritic platforms, bis-MPA based polyester scaffolds have been in the research frontier towards biomedical applications. This is mainly due to their structural diversity, simple functionalization protocols along with being biocompatible, biodegradable and non-toxic. The commercial availability coupled with the rise of facile postfunctionalization protocols such as click chemistry and fluoride-promoted esterification (FPE) reactions is herein envisaged to give non-dendrimer specialists the necessary toolbox to venture and custom-build next generation sophisticated drug delivery systems.