An interesting application of analytical chemistry is in biomarker analysis: the use of a chemical, a set of chemicals, or chemical modifications, as clues to answering scientific questions. Our researchers and product managers pay close attention to the needs in the biomarker industry, providing high-quality, relevant reference standards and other analytical tools for this field. One such set of products in our line is the hopanoids, lipids that are used by geochemists and environmental chemists as biomarkers in oil exploration and remediation after oil spills or gas leaks.

Hopanoids belong to the triterpenoid family, lipids that are resistant to saponification and are abundant in all animal and plant tissues. Sterols are important constituents of cell membranes and have variety of important functions, including controlling membrane permeability, organization and rigidity. In vertebrates, the main sterol is cholesterol, while in prokaryotes, hopanoids dominate.

Hopanoids are formed by the cyclization of squalane to a pentacyclic triterpanoid with a hopane skeleton (Figure 1) which has four cyclohexane rings and one cyclopentane ring. Over 150 distinct, naturally-occurring hopanoids have been identified in soils, sediments, and other organic matter. Hopanoids have a fixed stereochemistry and differ in the orientation about Carbon-17 and Carbon-21 (α or β) and Carbon-22 (R or S). The projection of the hydrogen in α isomers is above the plane of the paper, while β isomers project below the plane. Hopanoids also differ in the types of R-groups at Carbon-30 and varying degrees of unsaturation, primarily in rings D and E. Other modifications are also found. Hopanoids present in sediments range from C35 to C27, usually with the C30 isomers as the predominant form. 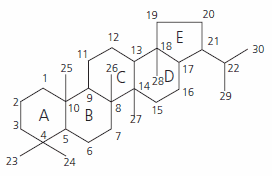 Analysis of hopanes generally begins by fractionation using preparative HPLC, followed by GC/MS of the sterol fraction looking for the characteristic m/z 191 ion. A representative GC/MS chromatogram appears in Figure 2. 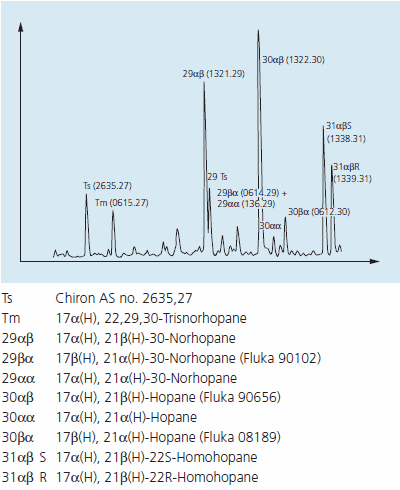 Figure 2.GC-MS (m/z 191) of a typical North Sea Oil with identification of the major hopanes. Printed by the courtesy of Chiron AS, Norway (www.chiron.no) and GEUS, Denmark and Greenland Geological Survey, Denmark

Important elements for geochemical analysis are maturation, origin and correlation:

Coal, oil, and natural gas are formed by the compression of ancient biomass under layers of sediment. Abiogenic origins have also been proposed. The quality of the oil is influenced by the biomass source (bacteria, Archaea, terrestrial plants, algae, etc.) and its age. Reliable biomarkers are valuable as they can help focus expensive exploration efforts on the most lucrative fields. Along with aromatic and low molecular weight hydrocarbons, hopanoids are used as biomarkers for oil, coal, and gas exploration, and spill remediation. Hopanoids are evidence of bacteria, primarily, but of other biomass sources as well. For example, samples with a high concentration of 17α(H),21β(H)-hopane are usually from non-marine source rocks. Besides rocks and sediment, hopanoids are also used to identify the source of oil seeps that appear on surface waters as indicators of active petroleum systems beneath. Besides petrochemical applications, Hopanoids are used to research the impact of bacteria on other environments as well.

Hopanoids occur in both recent and ancient sediments, even in rocks as old as 1,800 million years. Not only does the hopanoid profile point to the source of the biomass, the ratio of certain epimers is used to give an age to the oil or sediment. The order of thermodynamic stability of the 17-21 hopane isomers is

With a few exceptions, the thermodynamically unstable ßß-hopanes are the natural form in living organisms and recent sediments. During the course of diagenesis (the processes that occur during conversion of the sediment to rock) and catagenesis (the natural cracking process that converts the precursor compounds to hydrocarbons), heat and pressure cause the hopanoid to lose its stereospecificity, particularly at the 17 and 21 positions, giving rise to a large array of isomers. The stable αβ-hopanes predominate in crude oils and mature source rock sediments. Smaller amounts of βα- and αβ-isomers are present as minor constituents.

Maturity of the oil or sediment is often measured using Tm/Ts,1 which is the ratio of two specific types of trisnorhopanes (18α(H)-22,29,30-trisnorhopane and 17α(H)-22,29,30-trisnorhopane, or Ts and Tm, respectively). Ts is more stable and undergoes less degradation than Tm during diagenesis and catagenesis. Other changes also occur during the maturation process, including loss of side chains, oxygenation, cyclization, and unsaturation, depending on the environmental conditions during diagenesis and catagenesis.

Hopanes are important as internal markers in environmental and petroleum remediation studies, due to their persistency and stability. By comparing hopane profiles, the source of the oil spill can be identified. The thermodynamically stable forms 17β(H),21α(H)-Hopane and 17α(H),21β(H)-Hopane (Product No. 90656) can be used as internal markers for biodegradation of crude oils. The thermodynamically unstable 17β(H),21β(H)-Hopane (Product No. 07562) can be used as an internal standard because it is not present in crude oil. Historically, quantitative determination of hopanoid biomarkers has been difficult because of a lack of suitable reference standards. This is no longer an issue with the introduction of many important hopanoids.

Materials
Loading
1.
The index most often used is Ts/(Ts+Tm). The rearranged Ts is more stable than the „normal“ series Tm. It is an index of maturity. It is a topic of discussion whether Tm actually is converted to Ts, or whether Ts is formed faster or Tm is degraded faster. The ratio may also relate to the source.