LC/MS/MS Method for Determination of Glyphosate, AMPA, and Glufosinate in Cereals

Glyphosate is one of the most commonly used herbicides in the world. Its usage has significantly increased after the introduction of genetically modified glyphosate tolerant crops such as corn, soybeans, and cotton. Currently, more than 1.4 billion pounds of glyphosate are applied to fields per year.1 US EPA regulation document CFR-title 40-volume 24 set the tolerance levels for the occurrence of glyphosate in food commodities and produce.2

EPA tolerance levels for glyphosate residues in cereal grains (also called crop group 15) are set at 30 ppm. These exclude rice, soy, and corn. In rice the tolerance is 0.1 ppm, whereas in sweet corn it is 3.5 ppm.2 For glufosinate, a herbicide that is often included with glyphosate in analytical methods, the tolerance values are 0.4 ppm for cereal grains and 1.0 ppm for rice. These tolerance values include metabolites and degradants. Therefore, a glyphosate metabolite (aminomethyl)-phosphonic acid (AMPA), was also included in this study (Figure 1).

Since glyphosate is widely used with production of soybeans and corn, it was expected to be found in these commodities. In this application we focused on exploring the presence of glyphosate in other grains (oats and wheat) used to make breakfast cereals, including infant cereal products.

In order to confirm method performance, organic instant oatmeal and organic whole wheat flour were used. These foods were scanned for the presence of glyphosate and none was found. Whole wheat flour was used as is and the quick oats were ground prior to use. For the method performance study, both matrices were spiked to contain 100 ppb of glyphosate and 100 ppb of glufosinate.

Oats were also spiked to contain 100 ppb of AMPA. Organic corn flour was also purchased and tested for glyphosate and was found to be glyphosate-free. The same methodology can also be applied for testing corn flour and corn products.

The extraction method was based on the QuPPe (Quick Polar Pesticides Method) methodology developed in the European Union (EU) for fruits and vegetables, and used water:methanol (50:50) containing formic acid as the final extraction solvent.5 A five-gram sample of homogenized grain or cereal was weighed into a 50 mL centrifuge tube. Water (10 mL) and 100 μL of an internal standard solution (20 μg/mL of each analyte in water) were added. The samples were then left to stand for 30 minutes to two hours. After that, 10 mL of methanol containing 1% v/v formic acid were added. The samples were mixed for 15 minutes on a laboratory shaker and centrifuged. Two samples used during validation, oats and wheat, gave significantly different extracts. While oats produce a clear, yellow extract, the wheat extract was cloudy and difficult to filter. As a result, two different sample cleanup procedures were used for the different grain samples.

For the samples that did not have particulates after extraction and centrifugation, a solid phase extraction (SPE) cleanup using Supel™- Select HLB cartridge was applied, similar to a method reported by Chamkasem and Harmon.6 The HLB cartridges were conditioned using 100% methanol followed by water:methanol (50:50) containing 0.5% v/v formic acid. For 1 mL SPE cartridges, 0.5 mL of the sample extract was used to further condition the cartridge. The eluate from this conditioning step was discarded. A second aliquot of the sample extract (0.5 mL) was loaded into the HLB cartridge. This eluate was collected and filtered through 0.2 micron polypropylene membrane filter vials.

Ultrafiltration devices were used for cleanup of sample extracts, such as wheat, that had particulates after the centrifugation step. Polyethersulfone membranes at 3 kDa molecular weight cutoff (MWCO) were used in the present work. The membranes were pre-conditioned by passing 0.5 mL of the extraction solvent through by centrifugation at 4000 rpm for 5 minutes in order to keep the retention time of glyphosate consistent. This pass-through solvent was discarded and 1 mL of the sample extract was loaded. The ultrafiltration step was performed by centrifugation for 45 minutes at 4000 rpm. It was also determined that ultrafiltration devices containing regenerated cellulose membrane, such as Amicon™ Ultra centrifugal filters with 3kDa MWCO, can be used in this step without preconditioning. The clear sample that passed through the membrane was collected and analyzed. For analysis, low-absorption vials were used to prevent loss of analytes on the glass surface.

Beer samples could be analyzed using the same methodology. First, a thorough degassing of beer was undertaken by placing the beer sample in the ultrasonic bath for 15 minutes. Then 5 mL of the beer sample was mixed with 5 mL of methanol with 1% formic acid and internal standard. This sample was briefly mixed and cleaned using the SPE procedure.

The HPLC column used for this analysis was the polymer-based apHera™ NH2 column, which provides stable and robust LC separations from pH 2 to 13. The mobile phase gradient used water and ammonium carbonate at pH 9. This mobile phase ensured the proper ionization of glyphosate, which has a phosphate group in its structure, with detection under negative ESI conditions. In addition, ammonium carbonate buffer is volatile and is fully compatible with LC/MS instrumentation. Table 1 lists the MS conditions for all analytes and Figure 2 presents a chromatogram of a standard injection. Analysis was performed using an AB Sciex QTrap 3200 instrument. This limited method sensitivity. However, as can be seen below, the method was able to quantify glyphosate contamination in most samples in this study.

Both the SPE and ultrafiltration cleanup methods provided good sample cleanup, and were acceptable for LC/MS analysis. In oatmeal, all three analytes were detected and quantified at 100 ppb. In wheat flour, glyphosate and glufosinate were quantified at 100 ppb. The results of method tests are shown in Table 2. The method for wheat samples produced slightly higher uncertainties, up to 19% RSD. The wheat method did not use SPE cleanup and the resulting signals were found to have higher ion suppression in comparison to the samples that were cleaned using SPE, such as oats. In general, various degrees of ion suppression, from 50% to 80%, were present in all samples, and thus it was important to employ internal standards for accurate quantification. No analytes were found in the tested beer. Thus, the beer sample was spiked at 50 ppb with glyphosate and glufosinate and analyzed. The results are presented in Table 2. In this work we did not attempt further screening of beer.

Identification and Quantitation of Glyphosate in Cereals

The results of glyphosate quantitation in cereals are presented in Table 3. The samples of instant oatmeal (Figure 3) and white flour contained significant amounts of glyphosate, 1.2 and 0.8 ppm respectively. The organic oatmeal sample did not contain detectable amounts of glyphosate (Figure 4). Infant rice cereal had very low levels of glyphosate. The levels were close to the limit of instrument sensitivity in that the matrix and the resulting RSD was high. Infant oat cereal had glyphosate at 1.1 ppm and infant mixed cereal was found to contain glyphosate at 0.25 ppm. None of the infant cereals were labelled organic. Glufosinate was not found in any cereal products. AMPA was found only in instant oatmeal at low levels. 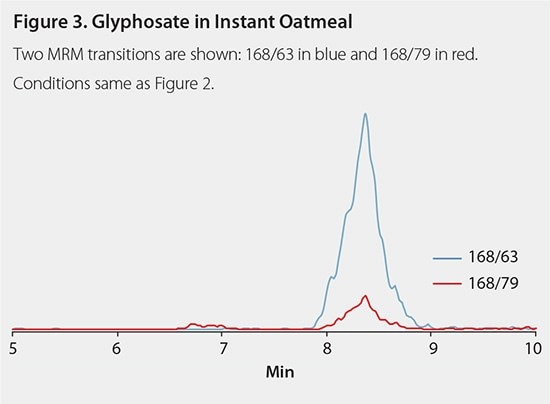 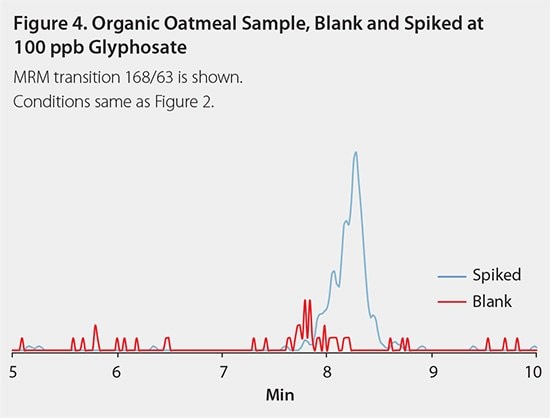 The proposed method developed for glyphosate and related compounds uses LC/MS/MS detection and an ion-exchange polymer-based apHera NH2 column that is stable under higher pH conditions. The sample preparation methodology was developed to extract glyphosate out of cereal food products. The methodology included cleanup using polymeric SPE, which was successfully applied to samples of cereals including oatmeal and infant cereal products. Cleanup that included ultrafiltration was developed for wheat-containing products and was successfully applied to wheat flour samples. Use of isotopically labelled standards resulted in better accuracy for glyphosate determination and allowed the use of solvent-based calibration curves by compensating for ionization effects present in samples. The method proved itself to be rugged and performed well, even when run on older and less sensitive instrumentation.