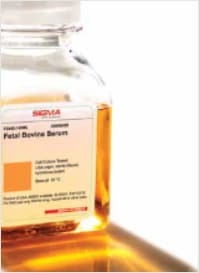 The United States Pharmacopeia (USP) designates how raw materials should be tested before they are used in the manufacture of finished products. The USP does not, however, provide specific rules for the screening of sera and other products of animal origin for adventitious viral agents (AVA). Title 9 of the Code of Federal Regulations (9CFR) includes the standard sampling and testing requirements for animal sera used in the manufacture of biologics. The entire battery of AVA tests listed in the 9CFR, Part 113, Section 53(c), are performed on every lot of our serum, where applicable.

For bovine sera, 9CFR, Part 113, Section 53(c), requires that two prescreened cell lines—Vero, plus a line of bovine origin, typically Madin-Darby Bovine Kidney (MDBK)—be cultured in the presence of test and control sera. After at least two subcultures over 21 days, the monolayers are examined for the presence of AVA by three industry-accepted methods: visualization of cytopathic effect, a hemadsorption assay, and fluorescent antibody techniques.

What are Adventitious Viral Agents? How do AVA affect bovine serum?

The World Health Organization (WHO) defines adventitious agents as foreign microorganisms—such as viruses—that may be unintentionally introduced during the manufacturing process of biological products. Animal sera, especially fetal bovine serum (FBS), are often included in complete cell culture media formulations. Whether cells are cultured for the production of biological products or for research assays, it is therefore advisable to demonstrate the absence of AVA in sera products which are common upstream components.

Many viruses cause a noticeable change in the physical appearance of the cells they infect. The cells may become abnormally large, grainy, have inclusion bodies, or may lyse altogether. These cytopathic effects, or CPE, can sometimes be observed when viewing an infected cell monolayer microscopically, and are considered dependable indicators of the presence of AVA. A cytological stain is used to enhance the visual differences between cells with and without CPE.

Some viruses that do not cause an observable change in cellular appearance can be identified by a hemadsorption assay. Cell monolayers to be screened are washed and covered with a suspension of red blood cells (RBCs), such as those from guinea pig or chicken. After an appropriate incubation period, uninfected cells will appear normal, while cells that contain virus-associated heme-adsorbing agents will bind the RBCs and appear dark on microscopic inspection.

One of the most sensitive and specific methods for detecting AVA contamination in cells is immunocytochemical (ICC) labeling with fluorescent antibodies. Cells to be screened can be incubated with fluorescently-labeled antibodies raised against specific viral agents. If cells are infected, the antibodies will bind to intracellular viral particles or to cell surface abnormalities and will fluoresce when examined by fluorescence microscopy. Unbound antibodies are washed away during the ICC protocol, so that uninfected cultures will not fluoresce. Ultraviolet (UV) wavelength-fluorophores may be particularly useful for this assay, as this approach precludes the cellular autofluorescence that may be observed at longer wavelengths.

The combination of these three screening techniques provides a powerful process that is used for the detection of the following AVA: