Polyaromatic hydrocarbons (PAHs) are ubiquitous in the environment, resulting from both natural and manmade sources of combustion. Farm animals, such as cows, can become exposed to them through both consumption of contaminated feed and water, and inhalation of contaminated atmosphere1. Consequently, these compounds can be present in dairy products produced from cow’s milk such as cheese and butter. Analysis of these compounds in butter can pose a special challenge due to the high fat content and the lipophilic nature of PAHs. Recovery of the PAHs often results in coextraction of the fatty matrix. In this application, Supelclean™ EZ-POP NP SPE was used as part of an extraction and cleanup procedure for the analysis of PAHs in butter by GC/MS in selected ion mode (SIM). After EZ-POP NP extraction, a secondary cleanup was done using silica gel. This produced an extract with low GC/MS background that could be analyzed on a single quadrupole instrument. The method was compared with an alternative sample preparation approach using a large silica gel SPE cartridge, and was found to produce better recoveries and lower background.

Butter was spiked at 20 ng/g with 28 different PAHs, containing 2-6 rings in their structures. The butter was melted and 1 g was diluted to 1 mL in cyclohexane. After mixing, sediment was allowed to settle and the resulting supernatant was drawn off for extraction. Replicate samples were extracted in two separate sets using the procedures outlined in Tables 1 and 2. Analysis was performed by GC/MS-SIM using the conditions listed in Table 3. GC/MS conditions were optimized for response and peak shape of the PAHs, especially those with 5 and 6 rings. Quantitation was performed using 5-point calibration curves prepared in unspiked butter extract. Separate curves were prepared for each set of samples and internal standard correction was used in calculating response.

EZ-POP NP was developed for the analysis of PAHs in edible oils, which are primarily sourced from plants and contain a significant amount of unsaturated fats. Method modifications were necessary for use with butter, which is a semi-solid derived mainly from cow’s milk and contains >50% saturated fats3. Loading the sample onto the cartridge had to be done in solvent to prevent the butter from solidifying. In previous approaches using direct application of melted butter to the EZ-POP NP cartridge, flow issues occurred when the sample solidified after being deposited on the frit above the sorbent beds. This resulted in poor reproducibility. A minimal volume of cyclohexane was used in dissolving and loading the butter sample. This reduced the chance of the sample being carried unretained through the sorbent beds by the nonpolar loading solvent prior to application of the more polar acetonitrile elution solvent. The composition of the fats in butter made a secondary cleanup using silica gel necessary, in order to produce an extract that could be analyzed on a single quadrupole GC/MS system. Since silica gel is a normal phase sorbent, it was necessary for the acetonitrile eluent resulting from the EZ-POP NP extraction to be back-extracted into hexane. Water was added to the acetonitrile eluent to increase partitioning of the PAHs into the hexane solvent.

Using the EZ-POP NP method, the average recoveries and reproducibilities for spiked replicates are reported in Table 4 after blank subtraction. Recoveries were between 80-120% for most PAHs.The lower naphthalene recovery was most likely due to evaporative losses during sample preparation. The benzo[b] and benzo[j] fluoranthene isomers coeluted during GC separation and were quantitated together. Reproducibilities were very good, with RSD values <10%. It was also noted that the final extracts were fairly clean of background, as seen in the GC/MS-SIM analysis of a spiked butter sample (Figure 1). 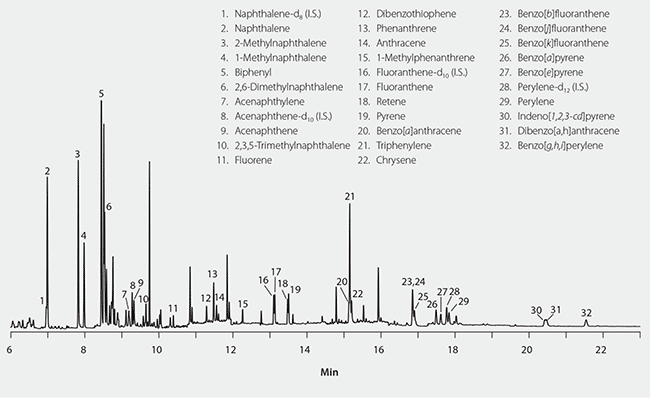 There are other approaches for the extraction of PAHs from butter, including liquid/liquid extraction (LLE) followed by SPE, saponification/LLE and SPE, LLE followed by gel permeation chromatography (GPC), and direct SPE using large cartridges or columns. The EZ-POP NP method was compared to the simplest of these alternate approaches: direct SPE using a large silica gel cartridge. This direct SPE method had fewer steps, as can be seen in Table 2. However, the extract contained more background, some of which interfered with the integration of several PAH peaks (Figure 2). GC/MS scan data (Figure 3) showed higher levels of heavier, later eluting background in the silica gel sample, including a large squalene peak, tentatively identified by MS spectral library match. Average recoveries obtained from replicates of 20 ng/g spiked butter prepared using large silica gel cartridge SPE were compared directly to those obtained using the EZ-POP NP method (Figure 4). Recovery was better for lighter PAHs using the EZ-POP NP method. In the extracts prepared using the large silica gel cartridge, naphthalene and methyl naphthalene responses were too low to be quantitated. In addition, other early eluting PAHs exhibited distorted peak shapes due to coeluting matrix. For the heavier PAHs (with the exception of pyrene), recoveries were similar between the two methods. Reproducibilities, represented by the error bars in Figure 4, were better for the EZ-POP NP method. 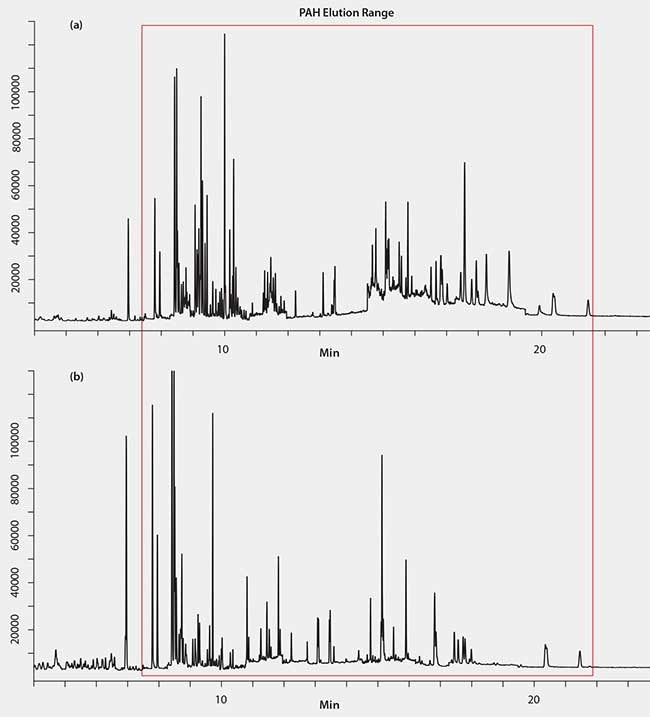 Supelclean EZ-POP NP can be used in combination with a second cleanup on a small silica gel cartridge for the analysis of PAHs in butter. Following the method described, good recoveries and excellent reproducibilities can be expected. Compared to extraction using a large silica gel SPE cartridge, the EZ-POP NP method yields a cleaner extract and better recoveries for lighter PAHs. The final extract, which is in hexane, is clean enough for GC/MS analysis on a single quadrupole instrument.