In contrast, aliphatic polyesters have gained significant traction in recent decades as drug delivery systems due to their biodegradability and biocompatibility. The degradation of the polyester backbone in vivo prevents accumulation of the carrier material and degraded products in the body, reducing the risk of long-term toxicity.2 Common polyesters used in drug delivery applications include poly(lactide)s (PLA), poly(caprolactones) s (PCL), poly(glycolide)s (PGA), poly(dioxanone)s (PDO), poly(butyrolactone)s (PBL), poly(valerolactone)s (PVL), and poly(lactide-co-glycolide) (PLGA) (Figure 1).3

A significant focus of current cancer therapy research is the delivery of anti-cancer drugs to tumor sites in a targeted manner, combined with activated release of the therapeutic payload. Stimuli-responsive polymeric drug carriers typically utilize nanocarriers (e.g., micellar systems, nanoparticles, polymersomes, or dendrimers) to release the drug at the tumor site by taking advantage of differences in the physiological environment between cancerous and healthy tissue. To further enhance the site-specificity of drug carriers, they can be conjugated with targeting moieties to allow for delivery at a specific tumor site. This article focuses on recent advances in the development of aliphatic polyesters for cancer therapy, specifically polyester synthesis, stimuli-responsive drug carriers, and active targeting.

There are several strategies for the synthesis of aliphatic polyesters, including the polycondensation of diacids and diols as well as the ring-opening polymerization (ROP) of cyclic esters. Disadvantages of polycondensation include the requirements of accurate stoichiometry between reactants, continuous removal of by-products (e.g., water), high temperatures, long reaction times, and difficulty obtaining high molecular weight polymers.4 In contrast, ring-opening polymerization typically results in high molecular weight polyesters and features limited side reactions. Based on its ease of use and the wide variety of initiators and catalysts available, ROP is widely used to polymerize cyclic ester monomers. The three most common mechanisms used in cyclic ester ring-opening polymerization are coordination-insertion, enzymatic, and anionic.4

Coordination-insertion ROP is initiated by an alcohol or amine and catalyzed by metal complexes based on Lewis acidic metals such as tin, aluminum, and zinc.1 While this method yields high molecular weight polymers, residual traces of the metal catalyst in the final polymer have been considered a major drawback limiting biological applications. For example, tin(II) bis(2- ethylhexanoate) (Prod. No. S3252), is an FDA-approved food additive commonly used for polyester synthesis, but due to the toxicity of tin, the residual concentration must remain below a certain threshold for use in food or biomedical applications.4

Enzymatic ROP commonly uses lipases as the catalyst in mild conditions, avoiding the use of toxic metals. While this method allows for the production of polyesters with stereo-, chemoand regio-selectivity,5 the resulting polyesters are commonly produced in relatively low yield with high polydispersity.3 Anionic ROP yields high molecular weight polyesters but these reactions frequently undergo side reactions, due to backbiting.4

Choosing an appropriate polymer vehicle and aptly tuning its properties ensures increased drug loading efficiency, reduction of drug dose and dosing frequency, alleviation of side effects, improvement of patient compliance, and short in vivo half-lives for drug delivery. Micelles, nanoparticles, and polymersomes are the most commonly explored drug carriers from synthetic polymers, formed by the self-assembly of amphiphilic block copolymers. Nanoparticle formation can be controlled kinetically through the variation of temperature, pH, electrolytes, and solvents and typically range in size from 10 to 1000 nm.3,7 Micelle formation is thermodynamically controlled,6 proceeding only when unimers aggregate above the critical micelle concentration (CMC), to form particles with sizes ranging from 5 to 100 nm.3,7 Upon interaction with hydrophobic segments, a hydrophobic drug will migrate into the core of the micelle to form a core-shell matrix. In contrast, polymersomes are composed of a core filled with aqueous solution surrounded by a bilayer membrane composed of hydrophilic coronas located both on the inside and outside of the sphere. This unique structure enables polymersomes to encapsulate both hydrophobic and hydrophilic drugs.

Polymeric drug carriers facilitate the delivery of high drug payload to the site of action and allow controlled and sustained drug release under physiological conditions through erosion or stimulitriggered release.2,3,8 Upon water permeation, polyesters can undergo degradation via hydrolysis resulting in loss of polymer mass. Depending on the identity of the polymer backbone, erosion can either occur at the bulk or the surface of the nanocarrier (Figure 2). Surface erosion occurs when the rate of degradation is faster than the rate of water permeation into the bulk polymer. In contrast, bulk erosion occurs when water penetrates the bulk of the polymer at a faster rate than the erosion rate. The majority of biodegradable polyesters degrade via bulk erosion due to the increased ratio of aliphatic content. Recently, polymeric drug carriers with enhanced surface area have been utilized to control drug release, taking advantage of both surface and bulk erosion mechanisms.2,5,8 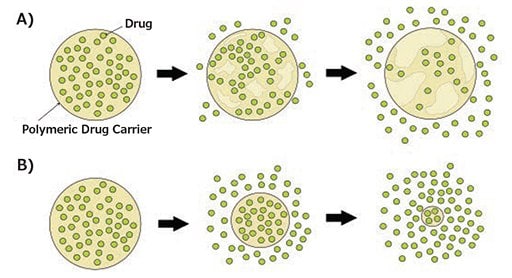 Some carriers are designed to release the loaded drug only when exposed to external stimuli such as pH, temperature, reduction, enzymes, and light, preventing premature release of the encapsulated drug (Figure 3).3 This results in an increased therapeutic efficacy of the drug and a decrease of potential toxicity to healthy cells.9 Polymeric drug carriers are able to enter tumor sites through passive targeting via the enhanced permeability and retention (EPR) effect. As a result of this phenomenon, nanoparticles in the size range of 10 to 100 nm accumulate in tumor sites due to the presence of leaky vasculature.3 In addition to utilizing this effect, polymeric drug carriers can be designed to respond either to a single or multiple stimuli by taking advantage of the difference in physiological environment between normal and tumor tissue. The difference in acidity between healthy and cancerous tissue allows for the development of pH-dependent release mechanisms.

For example, the pH of healthy tissue is 7.4 whereas the extracellular environment of the tumor tissue is 6.8 and intracellular endo/lysosomal pH is in the range of 4.0–6.5.10 In the presence of acid-labile functional groups, drug carriers are cleaved in an acidic environment, releasing a drug at the tumor site. Synthesis of a pH-responsive (mPEG-PLA)-curcumin prodrug and further self-assembly in to a micellar system was investigated by Zhao and coworkers.11 The drug, which was conjugated to the polymer via a pH-responsive acetal linkage, showed more than 45% release at pH 5 after 48 hours while less than 20% of curcumin was released from the micellar system at pH 7.4.11

The difference in concentration of glutathione (GSH) between healthy cells and cancer cells can also be used as a stimulus. Tumor cells have an intracellular GSH concentration of ~2–10 mM, several times higher than the concentration in healthy cells.10 The increased GSH concentration can cleave reduction-responsive disulfide bonds, allowing the release of the loaded cargo into the tumor site.12 A reductionresponsive micellar drug delivery system based on disulfide bond-containing PEG-PLA amphiphilic block copolymers was developed by Shen and coworkers. In a reductive environment, the breaking of disulfide bonds caused the rapid release of doxorubicin (DOX). Up to 64% of DOX was released from PEG2000-PLA5000 micelles after 14 hours in the presence of the reducing agent dithiothreitol (DTT). In the absence of DTT, only 40% of DOX was released after 14 hours.12

Thermally responsive drug delivery systems typically consist of polymers featuring a lower critical solution temperature (LCST) and upper critical solution temperature (UCST). Above their LCST, the polymers undergo a phase transition, becoming insoluble in water.13 Polymers with an LCST above normal physiological temperature (37 °C) are typically used in thermally responsive systems. These polymers are able to preserve their cargo in the body and undergo phase transition with the application of heat, leading to a burst release of drug in tumor tissue. A thermo-responsive monomer, γ-2-[2-(2- methoxyethoxy)ethoxy]ethoxy-ε-caprolactone (MEEECL), was introduced by Stefan et al. and combined with octyloxy-ε- caprolactone (OCTCL) to create an amphiphilic block copolymer with a LCST of 38 °C.14 The LCST could be adjusted in the range of 31–43 °C by replacing OCTCL with γ-(2-methoxyethoxy)-ε- caprolactone (MECL). The size of the resulting micelles increased from approximately 150 nm to 400 nm when the temperature exceeded the LCST of copolymer.13 Moreover, they demonstrated (experimentally and computationally) the effect of varying the substituent in the γ-position of caprolactone monomers in the thermo-responsive behavior of a series of self-assembled micellar systems utilizing MEEECL as the hydrophilic block (Figure 4). The resulting amphiphillic diblock copolymers were found to have an LCST in the range of 36–39 °C.15 While polymer delivery systems that respond to a single stimulus have had a significant impact on the development of drug delivery technology, recent efforts have focused on systems that can respond to more than one stimulus. A dual pH- and redoxresponsive system was reported by Ge and coworkers16 in which copolymer prodrugs were encapsulated into PEG-b-PCL micelles. The copolymer prodrugs were prepared by the polymerization of pH-responsive 2-(piperidin-1-yl)ethyl methacrylate (PEMA) and reduction-responsive camptothecin (CPT, Prod. No. C9911). Due to the protonation of PPEMA in acidic pH, the zeta potential of the micelles increased from -2 mV to +12 mV, resulting in an increase of the size of the micelles from 32.7 to 48.6 nm. 80% of CPT was released by the cleavage of the disulfide bonds in response to increased GSH concentration. Thermo- and pH-responsive micelles designed by Chen and coworkers consist of a hydrophobic PCL segment and a thermo-responsive poly(Nisopropylacrylamide) (PNIPAM) hydrophilic segment, which was copolymerized with a pH-sensitive β-alanine-functionalized monomer (βA).17 The micelles were co-loaded with DOX and a photosensitizer, meso-tetraphenylchlorin. The LCST of this polymer decreased from 37 °C at pH 7.4 to 25.8 °C at pH 6.0, resulting in the release of the encapsulated drug in acidic conditions. Consequently, 70% and 40% of DOX was released in acidic and neutral environments, respectively.

Zhao and coworkers designed a multi-responsive, comb-like copolymer by grafting a copolymer of PEG, PCL, and a reductionresponsive disulfide bond to a thermo-responsive PNIPAM backbone via a pH-responsive acetal linkage (Figure 5).10 This dual-cleavable, multi-responsive, graft copolymer aggregate demonstrated high DOX release after stimuli application. Cumulative DOX release was studied in different conditions, including neutral and acidic pH, elevated temperature, and in the presence or absence of DTT. A maximum release of 77.1% was observed at 37 °C, pH 5.3, and in the presence of DTT, in contrast to only 36.1% at 25 °C, pH 7.4, and without DTT. Although stimuli-responsive carriers increase the chance of accumulation in the targeted site, active targeting can be used to direct the drug delivery system to specific sites in the body. 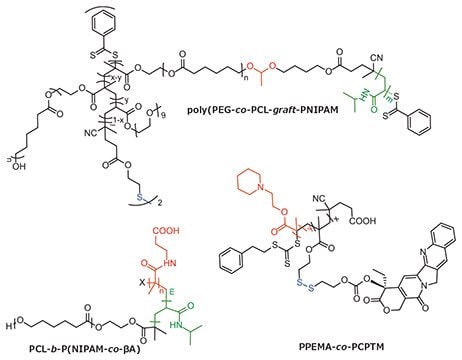 Compared to passive targeting, targeted drug delivery allows for the delivery of encapsulated drugs to the targeted site, reducing the risk of toxicity to normal cells and allowing for the accumulation of drug in sufficient concentrations to eliminate tumor cells. A comparison of passive and active targeting is shown in Figure 6. Targeting moieties are typically attached to the polymer through end-group variation or conjugation along the polymer backbone. A wide spectrum of targeting moieties can be used, including antibodies, proteins, peptides, carbohydrates, vitamins, and nucleic acids.3 Finally, poly(poly(ethylene glycol) methacrylate)− poly(caprolactone)−poly(poly(ethylene glycol) methacrylate) (pPEGMA−PCL− pPEGMA) triblock copolymer was conjugated with DOX through an acid-labile hydrazone bond. This pH responsive system was then functionalized with folic acid and/ or AS1411 aptamer, which specifically bind to folate and nucleolin receptors, respectively, that are overexpressed in cancer cells. Using fluorescence-activated cell sorting, the cellular uptake of this dual-targeted system in MCF-7 and PANC-1 cells was found to be 10- and 100-fold higher compared to single and non-targeted nanoparticles, respectively. Moreover, L929, a noncancerous cell line showed no DOX adverse effects.20

Due to their versatility, biodegradable aliphatic polyesters have been shown to be excellent candidates in a wide range of anti-cancer drug delivery applications. Stimuli-responsiveness and targeted release of anti-cancer drugs with polyester drug carriers has improved the therapeutic efficacy while reducing adverse side effects to healthy cells. The structural and functional diversity of aliphatic polyesters provides new opportunities for creating novel materials with enhanced performance with dramatic impact on the development of next generation drug delivery systems. Progress in the development of aliphatic polyesters for anticancer drug delivery applications will continue to advance from the laboratory to clinical trials, improving both treatment options and patient outcomes in cancer therapy.