Microparticle drug delivery systems have been extensively researched and applied to a wide variety of pharmaceutical and medical applications due to a number of advantages including injectability, local applicability to target tissues and sites, and controlled drug delivery over a given time period. Drug-loaded polymer particles are conventionally prepared by emulsion methods. As an oil-in-water emulsion, polymers typically dissolve in a water-immiscible organic solvent along with either the organic soluble drug or dispersion of drug particles and form colloidal droplets in aqueous phase. This mixture is subsequently emulsified into a large volume of water with surfactant and subjected to solvent removal by evaporation/extraction to solidify the droplets into particles. Such methods are quite straightforward; however, there are several drawbacks to this technique: 1) Heterogeneous size distribution; 2) limited shape (sphere) of drugs; 3) difficulty in predicting and controlling their properties; and 4) limited capacity for loading of hydrophilic drugs. A drug-polymer emulsion is prepared as described below and a resultant image is shown in Figure 1A. A volume of 100 μL of a dichloromethane solution, consisting of 5% (w/v) poly(l-lactic acid) (Mw: 232 kDa) chemically conjugated to Flamma Fluor FPI749 dye, was added to a Poly(vinyl alcohol) (PVA) 0.5% (w/v) solution emulsified via high-speed homogenization using a traditional homogenizer (IKA, ULTRATURRAX®, 10,000 rpm). The emulsification continued for 2 minutes, followed by drying under room temperature. As can be seen, the resultant particles (blue in color due to conjugated dye) exhibit a wide dispersion of sizes and are non-uniform. The disadvantages of emulsion include low drug loading capacity caused by high diffusion of drugs to aqueous continuous phase from solutiondispersed droplets, pore formation during solvent removal, and poor control over microparticle formation. For the smaller particles, the larger surface area-to-volume ratio of the particles results in even lower drug loading in the particles. Also, drug loading would be lowered for the case of non-specific adsorption between polymer particles and drugs during particle formation by emulsion. The reproducibility of particle fabrication is another difficulty because emulsion formation of microparticles is extremely sensitive to conditions and depends on several factors, such as the drug being encapsulated (solubility), the polymer (composition, concentration, molecular weight), the ratio of drug to polymer, the emulsifier being used, the organic solvent (evaporation rate, solubility, viscosity), the viscosity/volume ratio of organic to aqueous phase, and the temperature/speed of the emulsification process.1 Particles formed by this method also suffer from a high initial and non-controlled burst release which is a result of poor control over microparticle formation and is extremely conditionsensitive. Thus, it is significantly crucial to develop a technology which allows for the generation of controlled (size, shape, and load) microparticles with high drug loading capacity and loading efficiency. 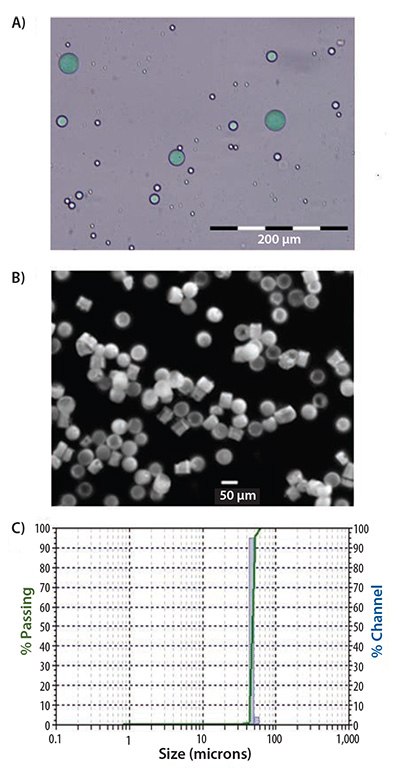 These controlled microparticles with homogenous size distribution have been developed for drug delivery by using photolithographybased micro-ﬂuidic techniques,2,3 soft lithographic techniques,4 and Particle Replication in Nonwetting Templates (PRINT) approach.5 However, harvesting the particles prepared by these methods is not simply due to the use of a permanent template. The monodisperse particles of these methods still show high initial burst similar to the particles obtained by conventional methods such as emulsion. In order to overcome this problem, we have developed a hydrogel template approach.6,7 This technique enables not only the capacity to produce microparticles with homogeneous size distribution and predefined shape and size, but also easily collect particles by dissolving the hydrogel template in an aqueous medium. Figure 1B shows an optical photograph of Poly(d,l-lactide-co-glycolide) (PLGA) particles prepared by hydrogel template using an automated device, “SpinSwiper.” Compared to the image of emulsion droplets shown in Figure 1B, the size of particles prepared by the hydrogel template method are very homogenous and uniform, which is confirmed by the size distribution profile shown in Figure 1C.

Hydrogels are materials which have a three-dimensional network structure and can hold or absorb water in the mesh made by crosslink junctions. They are widely used in tissue engineering, implantable devices, drug delivery systems, and even sensors due to their biocompatibility, controllable physical and mechanical properties, and response to external conditions.8,9 Hydrogels can be classified into physically or chemically crosslinked hydrogels depending on one of the criteria used to classify hydrogels, the reversibility of the network structure to external environments. For feasibly harvesting microparticles from the template, physically crosslinked hydrogels, such as gelatin and PVA with appropriate molecular weight, are used as templates since they lose their integrity upon wetting and can simply dissolve in aqueous medium. In addition, large quantity production of the particles is possible using this method. The steps to prepare a hydrogel template are shown in Figures 2A–2D. First, a silicon wafer with defined geometry, producing the desirable shape and size of particles is prepared as a master template by UV irradiation through a mask (Figure 2A). Next, an intermediate template made of silicone rubber is also prepared using the master template (Figure 2B). Then PVA (or gelatin) solution is poured onto the silicone rubber template and allowed to solidify (Figure 2C), and the solidified PVA template is peeled off and is ready to use as a template for fabricating microparticles (Figure 2D). To this template 200–300 μL of biodegradable polymer (mostly poly(lactic acid) or poly(glycolic acid) based polymers such as PLGA or PLA are used) in organic solution with the organic soluble or dispersed drug is placed on top of PVA template and uniformly spread by a swiper (Figure 2E). After the drug-polymer solution is well solidified, the template is dissolved in an aqueous medium (Figure 2F). The particles are then collected by filtration and centrifugation (Figure 2G). 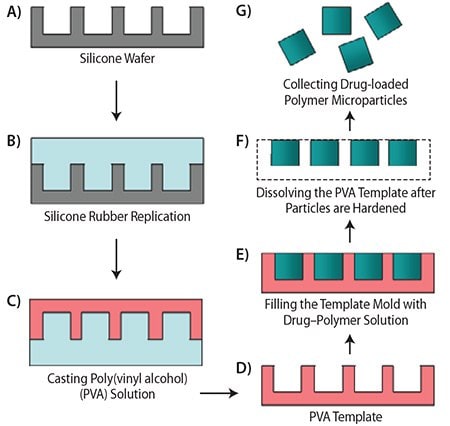 The size of particles can be varied depending on the template mold size from 1.5 μm to around 50 μm using the hydrogel template method. Previous research regarding four different drugs (paclitaxel (PTX), progesterone (PRG), felodipine (FDP), and risperidone (RSP)) loaded into PLGA microparticles relative to the particle size reported that the drug release from larger particles is mostly slower and longer, regardless of the type of drug.6 Figure 3 shows the drug release profiles of PTX, PRG, FDP, and RSP from cylindrical PLGA microparticles for the sizes of 20 μm and 50 μm.6 The drug release from the 20 μm particles is faster than from the 50 μm particles. Initial burst of RSP is relatively lower, which was explained due to relatively lower hydrophobicity compared to the others. This is because less hydrophobic drugs tend not to diffuse to the surface of particles when drug solvent evaporates. In addition, the hydrogel template approach is capable of producing microparticles with a variety of geometries and microstructures. 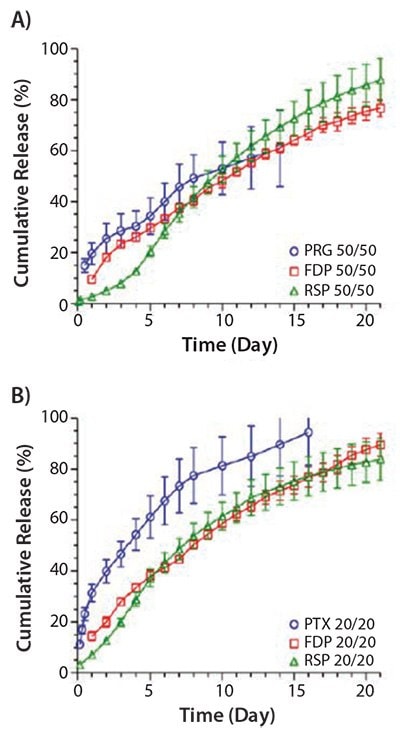 Figure 47 shows fluorescence images of PLGA microparticles with several different geometries fabricated using the dissolvable hydrogels template and PLGA-Nile Red solution. The geometry of drug particles is one of the crucial factors for development of drug delivery systems. The degradation kinetics of drug particles and their flow behavior in the body system will also be affected by the geometry. Also, the particle geometry plays an important role for tissue engineering materials since cellular responses such as encapsulation in intracellular vesicles is affected by the geometries of the particles.10 Moreover, the particles prepared by the hydrogel template method can have a multilayered structure by simply filling the mold in the template multiple times.7 Each layer can have its own unique function or allow for the loading of different drugs. In this manner, particles with multilayered structure can be expected to possess a wide variety of functionalities. 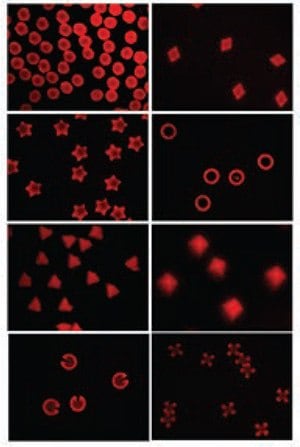 Figure 4.Microparticles with different geometries fabricated by the hydrogel template approach. The particle size was 50 μm. Adapted and reprinted from Reference 7.

Recently, we generated an automated version of the process of filling the template mold with polymer (or polymer-drug) solution by developing the “SpinSwiper” as shown in Figure 5. This automated device improves the quantity and speed of microparticles production. To be more specific, the filling step shown in Figure 3E is automated. There are more advantages of this device. SpinSwiper reduces the amount of wasted polymer solution, as a specified amount is dispensed and then the solution is contained to prevent evaporation. Another advantage is the reduction of variation that is inherently present when templates are swiped by hand. The whole process setup (Figure 5A) includes a syringe pump, syringe, and a SpinSwiper consisting of a rubber tube, a hollow blade, an aluminum plate with rubber backing where a template is placed, and a crossbar where the blade is secured. The drug-polymer (or polymer) solution is loaded into a syringe and placed on a syringe pump. One end of the rubber tubing is inserted over a needle attached to the syringe, and the other end of the rubber tubing is placed in the hollow blade of the SpinSwiper as shown in Figure 5B. A template is secured to an aluminum plate with rubber backing, and the plate is placed on the base of the SpinSwiper. The blade is installed on the crossbar of the SpinSwiper (Figure 5B) and the crossbar is locked onto the base. The blade is lowered onto the template without any gap. The syringe pump is set to a pre-determined flow rate (adjustable during the run) and the blade is filled with solution. Once the blade is filled, the SpinSwiper is started and the drug-polymer solution fills the mold of the hydrogel template as shown in Figure 5C. After the pre-set volume has been dispensed, the SipinSwiper is stopped and the template filled with the drug-polymer solution is peeled away from the rubber backing. The template is dissolved and the particles are harvested as depicted in Figure 3F–3G. 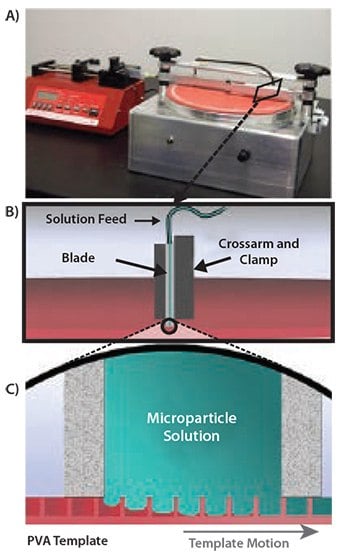 The hydrogel template approach makes it possible to easily fabricate homogeneous and high drug-loaded microparticles with predefined shapes and sizes. Thus, the properties and behaviors of these particles can be predicted and controlled. Furthermore, recent development of the automated SpinSwiper device brings out a technological innovation enabling the creation of simple and large-scale production of microparticles with a narrow distribution of sizes and, therefore, enhanced reproducibility. The combination of both the hydrogel template approach and automation will generate significant advances, not only in drug delivery and tissue engineering fields, but also in other material fields dealing with microparticles.