Halloysite, a naturally occurring aluminosilicate nanotube, has been undeservedly forgotten. Halloysite (Al2Si2O5(OH)4•2H2O) is a two-layered aluminosilicate, with a predominantly hollow tubular structure in the submicron range and chemically similar to kaolin1,2. The neighboring alumina and silica layers, and their waters of hydration, curve and form multilayer tubes (Figure 1) due to a packing disorder. Halloysite is an economically viable material that can be mined from the corresponding deposit as a raw mineral.2 As for most natural materials, the size of halloysite particles varies within 1-15 microns of length and 10-150 nm of inner diameter, depending on the deposits. In our research, we use halloysite G produced by Applied Minerals, Inc. and available (Cat. No. 685445). This material has an average tube diameter of 50 nm and inner lumen diameter of 15 nm (Figure 1). Typical specific surface area of this halloysite is 65 m2/g; pore volume of ~ 1.25 mL/g; refractive index 1.54; and specific gravity 2.53 g/cm3. 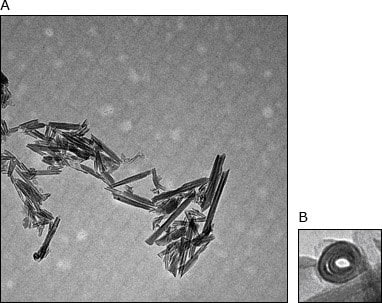 Chemically, the outer surface of the halloysite nanotubes has properties similar to SiO2 while the inner cylinder core is related to Al2O3. The charge (zeta potential) behavior of halloysite particles can be roughly described by superposition of mostly negative (at pH 6-7) surface potential of SiO2, with a small contribution from the positive Al2O3 inner surface.3,4 The positive (below pH 8.5) charge of the inner lumen promotes loading of halloysite nanotubes with negative macromolecules, which are at the same time repelled from the negatively charged outer surfaces. A wide range of active agents, including drugs,5-9 nicotinamide adenine dineculeotide (NAD), and marine biocides,9 can be entrapped within the inner lumen, as well as within void spaces of the multilayered aluminosilicate shells. This entrapment can be followed by retention and release of the agents, making the halloysite a nanomaterial well suited for macromolecular delivery applications.

We studied loading and release of macromolecules from the halloysite nanotubules. Loading was performed as follows: A vial containing the mixture of halloysite and saturated solution of targeted molecules was transferred to a vacuum jar and then repeatedly evacuated using a vacuum pump. Slight fizzing of the suspension indicates the air being removed from the halloysite interior. After the fizzing stopped, the vial was sealed for 30 minutes to reach equilibrium in molecule distribution. The halloysite suspension was centrifuged to remove excess dissolved molecules and washed. The process may be repeated twice to ensure that the halloysite is filled with the maximum amount of the targeted molecules. With this simple loading technique, one can fill nanotubule lumen with any materials, such as drugs, proteins, polyelectrolytes, and nanoparticles of proper diameter using old-fashioned method similar to muzzle loading with bullets.

Both hydrophobic and hydrophilic agents can be entrapped after an appropriate pre-treatment of the halloysite surface.10-11 For example, we recently demonstrated loading of the halloysite with urease for bio-catalytic CaCO3 synthesis in the tubule lumen.11 For hydrophilic molecules (like kellin, NAD, tetracycline) a typical release time was 2-5 hours and for molecules with low solubility in water (like dexamethasone, furosemide, nifedipine) release time 5-20 hours was observed (Figure 2). Macromolecular release profiles from the halloysite are well described by a one-dimensional diffusion model through the nanotube lumen opening. 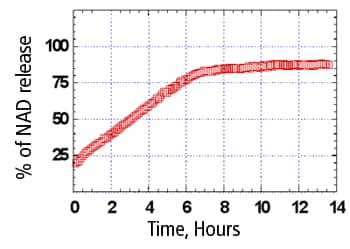 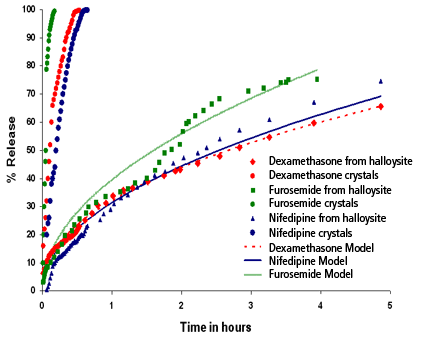 We foresee a great deal of fundamental research and many applications employing halloysite clay nanotubules. Research will include:

Possible applications of halloysite nanotubes include: