The ability for synthetic polymers to degrade in a controlled manner was developed for environmental reasons in the late 1960s. Interest in utilizing biodegradable polymers for biomedical applications rapidly followed and research focused on designing novel materials has continued to grow. Biodegradable polymers can be tailored for controlled degradation through numerous functional groups including esters, amides, anhydrides, and others. Among these, polyesters synthesized from lactide1 and glycolide2 (Figure 1), are of particular interest because they are well tolerated in biological systems and display distinct tunable physicochemical and mechanical properties. Synthetically, poly(glycolide) (PGA)3 and poly(lactide) (PLA)4 are typically prepared via ring-opening polymerization of lactide and glycolide, respectively. Their degradation products are predominantly glycolic acid5 and lactic acid6, respectively.

Most biomedical applications have specific requirements and high quality materials are crucial in order to obtain reliable and predictable behavior. The quality of these polymers is characterized by a narrow molecular weight distribution, a low residual monomer content, minimal impurities, and a well-defined chemical structure. The desired parameters can be controlled via living ring opening polymerization to design polymers with well defined properties specific to the application need. Historically, polyhydroxyester was the first biodegradable polymer utilized in a biomedical application as a biodegradable suture material. Other biodegradeable polymers and applications followed which include their utilization for biodegradable medical devices (screws, plates, stents), as drug carriers, and as material for tissue engineering. Depending on the desired application the required degradation rate can range from a few days to a few years.

RESOMER® polymers are bioresorbable aliphatic polyesters comprised of a range of different ratios of lactide and glycolide monomers, PLA stereochemistries, and end-group functionalization. These biodegradeable homopolymers and copolymers of lactide and glycolide afford a variety of properties that range from very stiff, hard semi-crystalline materials with long degradation times, to softer, amorphous materials with faster degradation rates. The general trends are summarized in Table 1.

The presence of water leads to hydrolysis of the RESOMER® polymers. Figure 2 illustrates the steps involved in the biodegradation processes of RESOMER® polymers. In the first step water wets the surface and diffuses into the polymer. The rate of the diffusion depends on porosity, pore size and surface tension. In the second step, ester linkage hydrolysis cleaves the chain into smaller chain lengths (polymer degradation). As the degradation proceeds, smaller chain segments (<100 g/mole), start to dissolve and polymer erosion takes place (step 3). The solubilized monomers/oligomers are then excreted via the kidney or metabolized into carbon dioxide and water (step 4). At the end of the process the polymer is completely absorbed and eliminated from the body. The complete disappearance of biodegradable polymers after the duration of their lifecycle (e.g., fixation or drug release) is a highly desired feature. The complete disappearance is an intrinsic characteristic of RESOMER® polymers due to the high water solubility of the monomers. In contrast, hydrophobic monomers of polyanhydrides tend to reside locally long after the polymer has degraded due to their poor solubility.1,2

In addition to the inherent polymer properties, the final performance and residence time of a biodegradable device can be tailored by processing and introduction of copolymers or additives. For example, amphiphilic substances incorporated into the device will increase wettability, and processing that generates high porosity will increase the water penetration. The concentration and the size distribution of incorporated substances (e.g., therapeutic agents) can change the kinetic parameters of the degradation processes (Figure 2). Strong alkaline or acidic materials can enhance polymer degradation. The microclimate inside the polymers is a crucial factor for release and degradation processes. It has been shown, that the pH inside PLGA implants can drop to pH values as low as pH 2 in vivo.3 Excellent work by the groups of Schwendemann, Siepmann, and Göpferich and others show that (i) degradation is often heterogeneous and occurs faster in the central part of the delivery systems, (ii) acidic pH environments are also present in microparticles and (iii) therapeutic agents and/or buffering substances can modify the microclimate and, therefore, the kinetics of polymer degradation and drug release.4-7 An acidic microenvironment could also interfere with the performance of an incorporated drug. Recent studies show that an acidic microclimate favors the covalent modification of peptide drugs by polymer degradation products, but incorporation of appropriate salts avoided the pH drop and stabilized peptide and protein drugs.8

Several processing technologies can be applied to biodegradable polyesters to formulate coatings, implants, micro- and nanoparticles, or micro- and nanocapsules. Most commonly used are thermal-mechanical treatment or solution facilitated technologies (Figure 4).

Melt extrusion is one method that is utilized in the production of sutures and preformed implants. Moderate heat can be used to thermally process most RESOMER® polymers, for example X has a glass transition temperature (Tg) of ~50 °C. Peptide-loaded, preformed PLGA or PLA implants are widely used as 1 to 6 months depot formulations for the treatment of hormone sensitive prostate or breast cancer. A depot formulation is injected subcutaneously or intramuscularly and contains pharmacological agent which is released in a controlled manner over a long period of time. Recently, smaller sized dexamethasone-loaded PLGA intravitreal implants have reached the market to treat macular edema in the eye.9

An alternative approach to preformed implants is the in situ formation of implants. In this method biodegradeable PLGA or PLA polymers are dissolved in a biocompatible organic solvent and injected into the patient. In situ implant formation is easy and has low processing costs compared to preformed implants. In addition, smaller needles are used in this method that has a clear advantage to the patient. However, the size and the shape of the resulting implant shows significant variability and depends strongly on the application procedure and the local tissue conditions. In addition, the initial burst release is high and difficult to control.

Another route to deliver therapeutic agents is via microparticle encapsulation. Microparticles are commonly used for the parenteral delivery of hydrophilic or hydrophobic drugs. The loaded microparticles are commonly prepared via spray drying, coacervation or emulsification with solvent evaporation. The drug is either solubilized or dispersed within the microparticle. The release profile depends on the size distribution and porosity of the microparticles, the drug characteristics and concentration, and the release conditions. Often the release profiles show the following phases: (1) initial burst release; followed by a (2) slower release phase and (3) an accelerated final release phase. The accelerated final release phase is caused by the acidic microclimate inside the particle generated by the autocatalytic degradation of the polyester. The release profile can be adjusted by appropriate formulation parameters. For example, linear release, pulsed release (e.g., for vaccination) with no burst release, and a tunable lag phase release can be achieved.

Although a significant range of applications are available with PLA and PLGA copolymers, the introduction of chemical modification by incorporating polyethylene glycol (PEGylation) to the polyesters opens new avenues for applications. PEGylation has a measurable impact on degradation and erosion, as shown in Figure 4. For PLGA, degradation takes place for approximately three weeks before erosion occurs. Erosion commences once the molecular weight drops to ~7,000–8,000 g/mole, and occurs at a relatively rapid rate. However, PEGylated PLGA copolymers (PEG-PLGA) show both degradation and erosion without any lag time. Although erosion is faster at the initial stage, as expected for the more hydrophilic PEG-PLGA, PLGA reaches the final mass over a much shorter timeframe. This nonlinear behavior of PLGA is explained by the autocatalytic degradation and the acidic microenvironment inside PLGA. 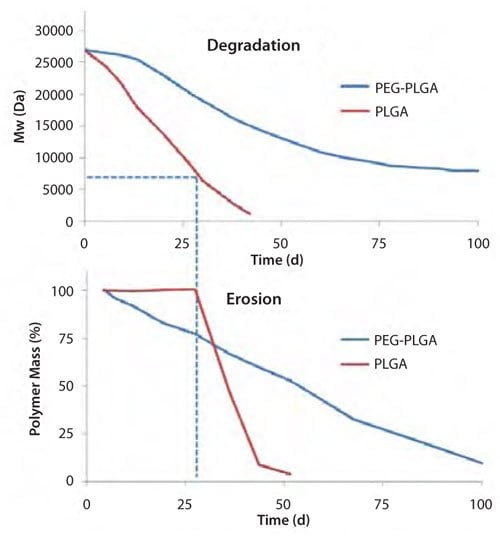 The incorporation of even low percentages of PEG accelerates water penetration and enables the rapid diffusion out of low molecular weight degradation products (typically acids). Therefore, the decrease in acidic microenvironments decreases the impact of autocatalysis and slows the degradation rate.

The rate of release of therapeutic agents can also be tailored with PEGylated RESOMER® polymers. Small molecular drugs are rapidly released from PEGylated RESOMER® polymers, but larger peptides and proteins can be released over days to several weeks. PEGylation increases the hydrophilicity of the polymers. The hydrophilicity can be tuned by the change of the chain lengths and the ratio of the hydrophilic PEG and the hydrophobic PLA/PLGA blocks. However, a high percentage of PEG leads to micelle forming copolymers. If the hydrophilicity is balanced, the polymers form lamellar phases. Polymers with lower PEG contents (<30 %) are not self-solubilizing and form nano- or microparticles or implants. However, due to the phase separation of PEG-PLA and PEG-PLGA, hydrophilic nanodomains exist. These nanodomains are a good environment for proteins. Many publications show that PEG-PLA and PEG-PLGA polymers are superior when compared to PLA and PLGA, for the controlled release of proteins as defined by a reduction of the initial burst release, for a much better control of the overall release profile, and for preservation of the protein activity. The introduction of PEG has a significant impact on the water penetration, polymer degradation and the release characteristics. It has been shown that water penetration into PEG-PLGA microparticles is very fast which leads to a fast solubilization of the protein. Low molecular weight compounds are immediately released; however, the protein is restricted in the PEG chains of the PEG-PLGA microparticles and a controlled release over days and weeks is achieved. PEG-PLGA polymers degrade initially faster and show often a more linear degradation and erosion profile. In contrast, pure PLA or PLGA polymers show often initial lag times due to the slow penetration of water. However, very often autocatalysis takes place and the degradation is accelerated due to the development of an acidic microclimate. Therefore, PLA and PLGA polymers can degrade faster despite their higher hydrophobicity. The desired release profile from PEGylated polymers can be achieved by the formulation process and the selection of the appropriate PEG content and/or chain length.

PEGylated RESOMER® has been used for the encapsulation of Bone Morphogenic Protein II (BMP II).13 The microparticles showed a tunable and controlled release profile and were able to induce bone formation in vivo after subcutaneous injection. PEGylated RESOMER® can be used also for the formulation of emulsifier free nanoparticles and nanocapsules. The particles are known to show long circulation times due to the stealth effect of PEG which reduces the interaction with the system. In conclusion, RESOMER® polymers are biodegradable and diverse materials for a wide range of applications. The appropriate selection of the polymer chemical composition and tailored formulation process can be used to obtain the desired properties for a given application. The development of PEGylated RESOMER® polymers offers new applications in the field of the Biopharmaceutics.