The emerging organic photovoltaic (OPV) technology is very promising for low-cost solar energy production. OPV devices can be produced using high-throughput, large-volume printing methods on lightweight and flexible plastic substrates, making them easy to deploy and use in innovative ways. For example, they can be integrated into buildings and windows, used as architectural design, in wearable applications, etc.

However, a major challenge has been how to increase the power conversion efficiency (PCE) of OPV devices to reach values comparable to well-established, mass-produced solar cells (ex: multicrystalline silicon can reach 22.3% in the lab).1 Until recently, the most efficient semiconductors used in OPV were a combination of p-type polymer (ex: PTB7-Th 794333, PBDB-T 901099, PffBT4T-2OD 900720) with n-type fullerene derivative (such as PC61BM 684457, PC71BM 684465, ICBA 745839).2 This allowed the PCE to reach values close to 11%, a value believed to be close to the theoretical limit for polymer/fullerene single layer OPV devices.3

Theoretical estimates are now more optimistic for NFA-based OPV devices and it is believed efficiencies over 19% are realistically achievable by optimising polymer/NFA bulk heterojunctions.5

Most of the high performance NFAs share common molecular features that allow them to outperform fullerene and other materials. As often seen in conjugated polymers, they feature a combination of electron-rich and electron-poor conjugated moieties to lower the bandgap and achieve a broader absorption of the solar spectrum. However, what sets them apart is that only the electron-poor side-groups are accessible to interact with the p-type material because the electron-rich core is shielded by bulky side-groups (Figure 1). This approach is thought to improve the driving force to create separate charges from an exciton.5 As a result, it is possible to achieve higher voltages in photovoltaic devices than with fullerene derivatives. Combined with an increased absorption coefficient and photocurrent generation, NFAs are the new n-type materials of choice for high-performance organic solar cells. 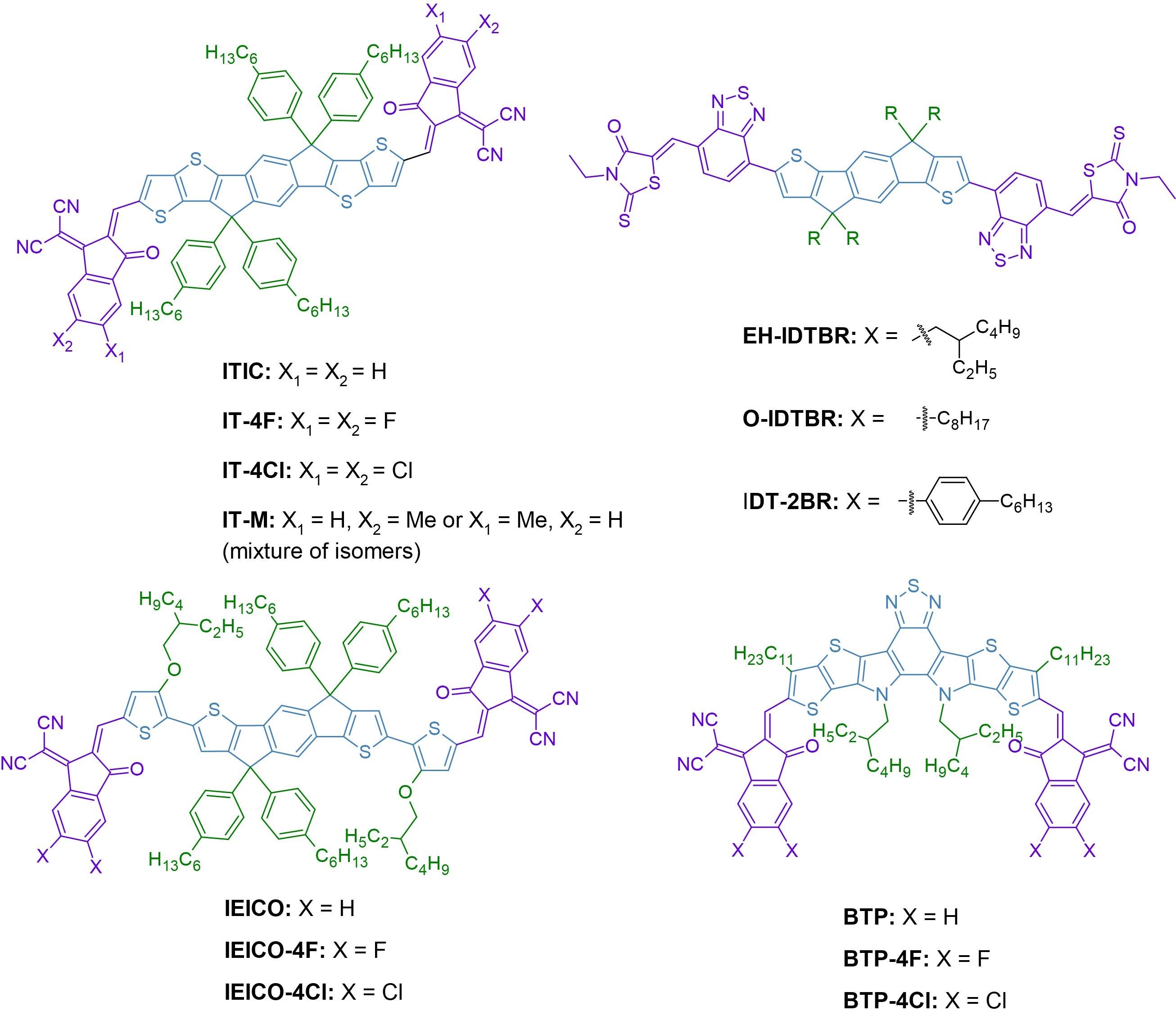 It is possible to fine-tune the electronic properties of NFAs by adding substituents on the end-groups. For example, halogens and methyl moieties can increase or decrease their energy levels and bandgap, which is a useful method to maximize cell performance. These substituents also influence the crystallinity of NFAs, an important factor to control phase separation, blend morphology and device lifetime.6 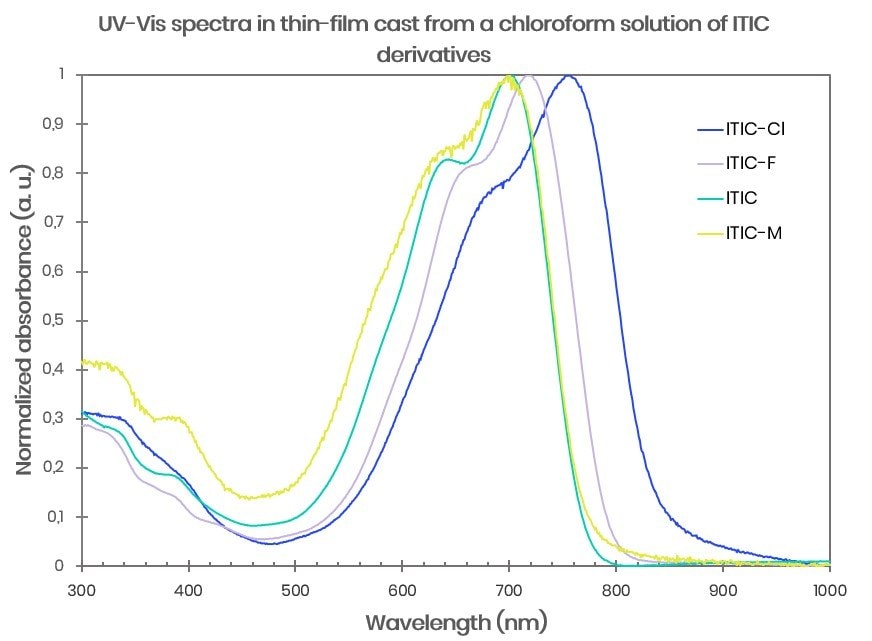 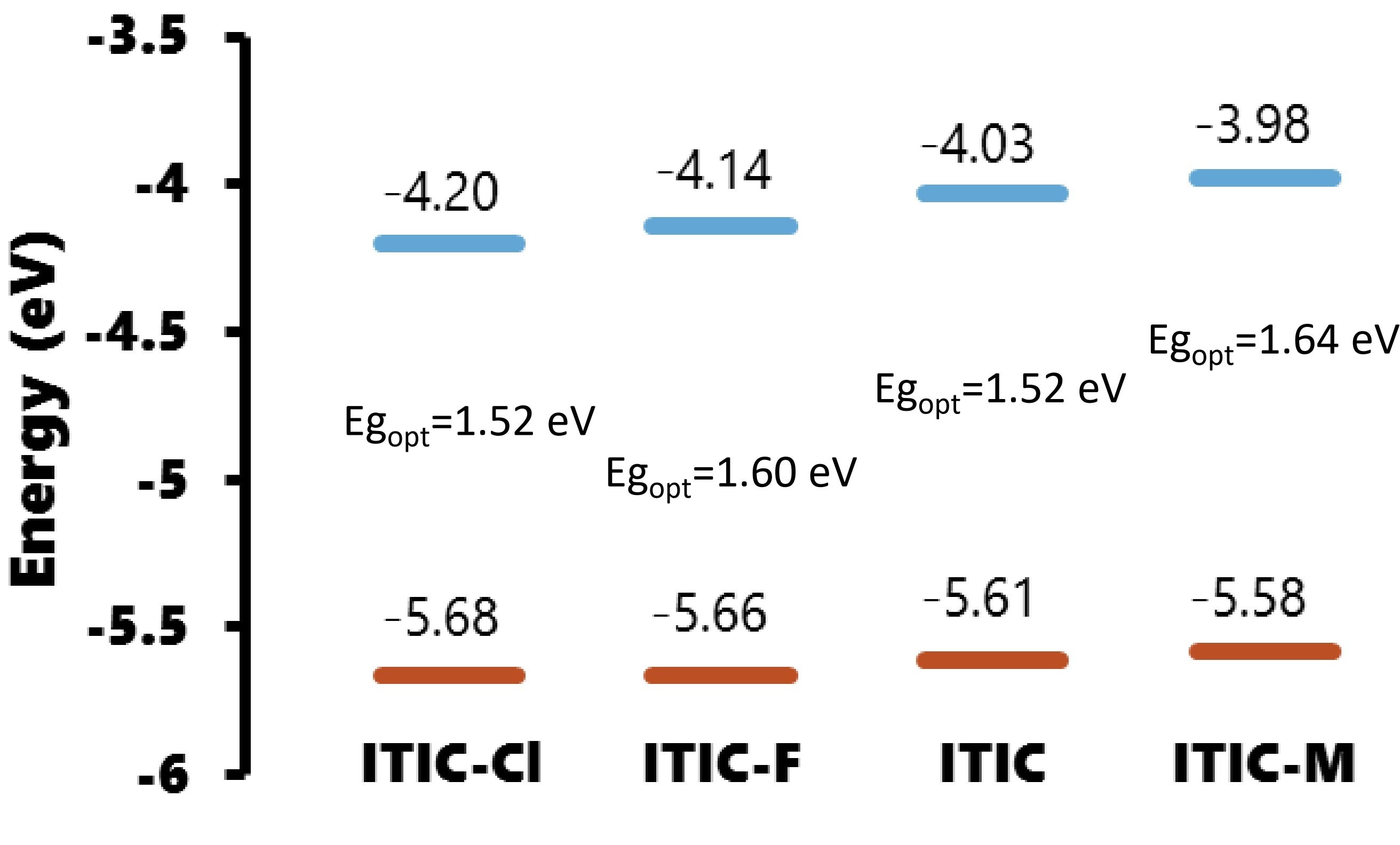 NFAs can be used to make organic photovoltaic devices using the same methods developed for fullerene n-type molecules. They can be solubilized in the same solvents commonly used to deposit the bulk-heterojunction layer, for example chloroform, chlorobenzene, dichlorobenzene, xylenes, etc.

As with fullerene derivatives, optimization of the morphology and phase separation can be investigated using small amounts of high boiling point solvent additives, for example 1,8-diiodooctane, 1-chloronaphtalene and anisaldehyde. Lower boiling point co-solvents such as for example o-xylene and N-methylpyrrolidone have also been successfully used with NFAs. Moreover, solvent vapor and thermal annealing can be used to optimize device performance. Please refer to the excellent review by Gurney et al. for more information about morphology control of polymer/NFAs blends.11

The printability and versatility of NFAs allow them to be used in innovative photovoltaic devices as well as other technologies. For example, wide-bandgap NFAs (> 1.75 eV, ex: IDT-2BR 910635, PBDB-T-SF 906344, and PBDB-T-2Cl 906352) are excellent candidates for low-light applications (indoor lighting) to power IoT devices, as they yield higher cell voltages and absorb most of the photons emitted by artificial light.12 Using low-bandgap materials, on the other hand, (ex: Y6 or BTP-4F 908509, BTP-4Cl, IEICO-4Cl, and BT-CIC 906824) is desirable for semi-transparent applications (ex: windows integration) as photon absorption primarily occurs in the near-infrared spectrum, with weaker extinction coefficients in the visible spectrum.13 Building integration is also an important market for OPV. Having access to NFAs with various absorption spectra, and consequently different colors, can be beneficial to make aesthetically pleasing solar cells integrated into architectural designs.

Applications for NFAs are not limited to organic solar cells. Their reduced bandgap compared to fullerene derivatives make them well-suited for making flexible, printed, near-infrared photodetectors with improved sensitivity.14 They can also be employed to make organic thin-film transistors15 and have potential in printed organic memory devices.16

A brilliant future for organic photovoltaics

The innovative molecular design of NFAs allows organic photovoltaics to overcome the performance limitation of OPV technology and to reach higher efficiencies. Power conversion efficiencies >16% in single layer devices can now be achieved4 and a PCE over 19% is expected to be reachable using polymer/NFA bulk heterojunctions.5 These materials offer improved photon absorption, reduced energy losses and versatility to offer new possibilities for device engineering. Adding new interlayers, optical adjustment layers17 and developing new device configurations18 could lead to even higher values, making NFAs one of the most important recent innovations for the OPV research field and market, and for renewable energy production at large.