Antibodies are normally produced by B cells, which are part of the immune system, in response to the introduction of foreign substances, such as infectious agents, into the animal’s body. The antibodies bind to the antigens that cause their generation and flag them for destruction, thus helping to fight infection. This inherent ability of the animal’s body can be leveraged to generate antibodies that bind to specific molecules.

Target-specific antibodies can be used to isolate and identify molecules of interest. Antibodies have become one of the most important tools in life science research, allowing the detection, quantitation, and determination of changes in proteins and other molecules with respect to time and other perturbations.

Many of the antibodies used in immunochemical techniques are raised by repeated immunization of a suitable animal, e.g., rabbit, goat, donkey, or sheep, with an appropriate antigen. Serum is harvested at the peak of antibody production. Specific IgG concentrations of approximately 1 to 10 mg/mL serum can be obtained by this method. Weakly antigenic molecules may require the addition of an adjuvant, which allows for the slow release of the antigen, making it more readily trapped by macrophages. Smaller molecules, such as drugs, must be coupled to more antigenic structures (i.e. carrier proteins) to stimulate an immune response.

One characteristic of large antigen molecules is that they induce the activation of many antibody-producing B cell clones in the immunized animal. This polyclonal mixture of resulting antibodies may then recognize a variety of epitopes on the antigen, which can be a useful feature in some experimental procedures. Because these polyclonal mixtures of antibodies react with multiple epitopes on the surface of the antigen, they will be more tolerant of minor changes in the antigen, e.g., polymorphism, heterogeneity of glycosylation, or slight denaturation, than will monoclonal (homogenous) antibodies. Depending upon the antigen that is used to create the antibody, one may use polyclonal antibodies to identify proteins of high homology to the immunogen protein or to screen for the target protein in tissue samples from species other than that of the immunogen. Along the same lines, it is especially important when working with polyclonal antibodies to learn as much as possible about the immunogen that has been used for production of the polyclonal antibody and the potential for undesired cross-reactivity within the sample being analyzed. Peptide immunogens are often used to generate polyclonal antibodies that target unique epitopes, especially for protein families of high homology. 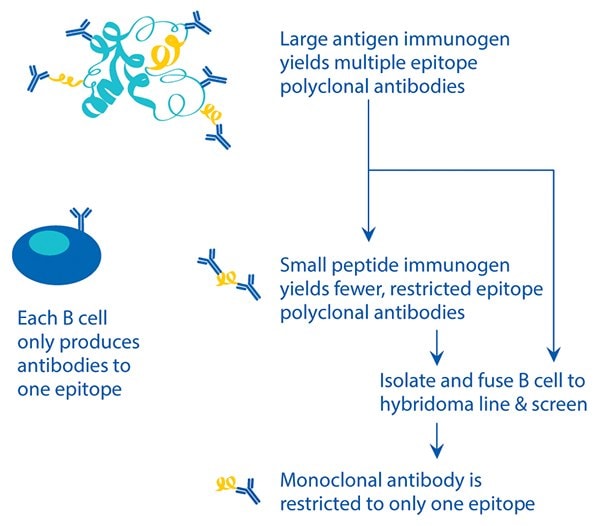 Production of monoclonal vs. polyclonal antibodies.

Some Useful Properties of Polyclonal Antibodies

Some Useful Properties of Monoclonal Antibodies

Each clone number represents a specific cell line that was used to produce the antibody. Since antibodies are produced by more than one host, each cloned cell line receives a unique clone number. Each hybridoma cell clone produces only one single pure antibody type.

As the name implies, the antibody format refers to the presentation or purification state of the antibody. Various formats are described below:

Polyclonal antibodies are often available in relatively unpurified formats, and are referred to as “antiserum” or simply as “serum”. Antiserum refers to the blood from an immunized host from which the clotting proteins and RBCs have been removed. The antiserum, as its name suggests, still possesses antibodies/immunoglobulins of all classes as well as other serum proteins. In addition to antibodies that recognize the target antigen, the antiserum also contains antibodies to various other antigens that can sometimes react nonspecifically in immunological assays. For this reason, raw antiserum is often subjected to purification steps, to eliminate serum proteins and to enrich the fraction of immunoglobulin that specifically reacts with the target antigen.

Antiserum is commonly purified by one of two methods: Protein A/G purification or antigen affinity chromatography.

Typically, affinity purified antibodies exhibit lower backgrounds than unabsorbed antibodies and this purification process is particularly important for difficult, or state-dependent epitopes. When developing polyclonal antibodies that recognize targets with post-translational modifications, the use of modification specific antigen affinity columns during the purification process can significantly improve the specificity of the antibody for state-dependent target. Depleting unmodified target protein from the serum before affinity purification (using immobilized, modified target protein) increases the specificity for the modified target. Specificity testing can then be performed to confirm that the antibody only recognizes the post-translationally modified form of the Protein.

Antibodies are widely used for protection from infectious agents. Most vaccines (microbial antigens) induce the production of antibodies that block infection or interfere with microbial invasion of the bloodstream. To achieve this, antibodies must be functional in the sense that they are capable of neutralization or opsonophagocytosis.

The membrane attack complex (MAC) cytolysis MAC is formed on the surface of pathogenic bacterial cell as a result of the activation of the complement system (both alternative and the classical pathways). The MAC forms transmembrane channels in bacterial walls, disrupting their phospholipid bilayer and leading to cell lysis and death.

Antibodies can interfere with virion binding to receptors and block their uptake into cells. Many enveloped viruses are lysed when antiviral antibodies and the complement system disrupt membranes. Certain antibodies can also aggregate virus particles. Non-neutralizing antibodies are also produced following any viral infection. Although these antibodies bind specifically to virus particles, they do not neutralize them. On the contrary, they may enhance infectivity because the virus-antibody complex enters the cell by endocytosis. This can lead to viral replication. The type of antibody produced can influence the outcome of viral infection. For example, poliovirus can elicit IgM and IgG responses in the blood, but mucosal IgA is vital for blocking infection. The IgA neutralizes poliovirus in the intestine, the site of primary infection. Hence, the live attenuated Sabin poliovirus vaccine is more effective because it elicits a strong mucosal IgA response.

An antibody can be directed against cilia or flagella of motile bacteria or protozoa that results in cessation of their motility and blocks their ability to move around and spread infection.

Certain antibodies can cause disruption of the microbial membrane that result in death of bacterial cells. This requires the participation of the complement system.

Antitoxin antibodies can be generated against microbial toxins. The F(ab) region of the antibody made against epitope of the binding site of an exotoxin can block the exotoxin from binding to the exotoxin receptor on the host cell membrane. This blocks the entry of the toxin into the cell.

The body’s innate defenses can physically remove bacteria by constant shedding of surface epithelial cells from the skin and mucous membranes. However, bacteria may resist this by producing pili, cell wall adhesin proteins, and biofilm-producing capsules. The F(ab) region of the antibody can bind to the adhesive tip of the pili, the cell wall adhesins, or the capsular molecules, and blocks bacterial adhesion to host cells.