The simplest form of separation by centrifugation is differential centrifugation, sometimes called differential pelleting (Figure 1). Particles of different densities or sizes in a suspension will sediment at different rates, with the larger and denser particles sedimenting faster. These sedimentation rates can be increased by using centrifugal force. A suspension of cells subjected to a series of increasing centrifugal force cycles will yield a series of pellets containing cells of decreasing sedimentation rate. 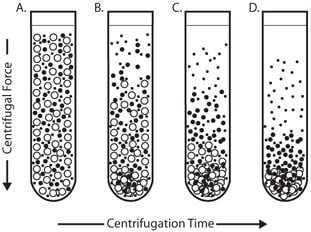 Particles of different densities or size will sediment at different rates with the largest and most dense particles sedimenting the fastest followed by less dense and smaller particles.

Differential pelleting is commonly used for harvesting cells or producing crude subcellular fractions from tissue homogenate. For example, a rat liver homogenate containing nuclei, mitochondria, lysosomes, and membrane vesicles that is centrifuged at low speed for a short time will pellet mainly the larger and more dense nuclei. Subsequent centrifugation at a higher centrifugal force will pellet particles of the next lower order of size (e.g., mitochondria) and so on. It is unusual to use more than four differential centrifugation cycles for a normal tissue homogenate.

In rate-zonal centrifugation the problem of cross-contamination of particles of different sedimentation rates may be avoided by layering the sample as a narrow zone on top of a density gradient (Figure 2). In this way the faster sedimenting particles are not contaminated by the slower particles as occurs in differential centrifugation. However, the narrow load zone limits the volume of sample (typically 10%) that can be accommodated on the density gradient. The gradient stabilizes the bands and provides a medium of increasing density and viscosity. 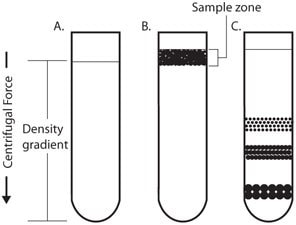 Sample is layered as a narrow zone on the top of a density gradient (2B). Under centrifugal force, particles move at different rates depending on their mass (2C).

In isopycnic separation, also called buoyant or equilibrium separation, particles are separated solely on the basis of their density. Particle size only affects the rate at which particles move until their density is the same as the surrounding gradient medium. The density of the gradient medium must be greater than the density of the particles to be separated. By this method, the particles will never sediment to the bottom of the tube, no matter how long the centrifugation time (Figure 3). 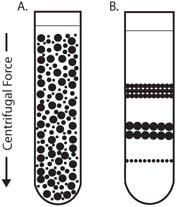 Starting with a uniform mixture of sample and density gradient (3A) under centrifugal force, particles move until their density is the same as the surrounding medium (3B).

Upon centrifugation, particles of a specific density sediment until they reach the point where their density is the same as the gradient media (i.e., the equilibrium position). The gradient is then said to be isopycnic and the particles are separated according to their buoyancy. Since the density of biological particles is sensitive to the osmotic pressure of the gradient, isopycnic separation may vary significantly depending on the gradient medium used. Although a continuous gradient may be more suited for analytical purposes, preparative techniques commonly use a discontinuous gradient in which the particles band at the interface between the density gradient layers. This makes harvesting certain biological particles (e.g., lymphocytes) easier.

The primary function of density gradient centrifugation is to separate particles, either on the basis of their buoyancy density or their rate of sedimentation. For rate-zonal separations, the function of the gradient is to provide a gradient of viscosity which improves particle resolution while stabilizing the column from convection currents. For isopycnic separations, the important feature is that the maximum density of the gradient media is higher than that of the particles. An ideal density gradient media has the following properties:3

No single compound can satisfy all of the above criteria. Therefore a wide range of gradient media are used for the different types of samples (Table 1). Most media are capable of producing the range of densities required and being easily removed from the particles of interest.

The effect of osmolality on biological particles requires special consideration. The osmolality of most mammalian fluids is 290-300 mOsm.4 This is the osmolality of balanced salt solutions (e.g., 0.85-0.9% NaCl) and most common media. High osmolality solutions not only remove water from the interior of membranebound particles, they also remove water bound to macromolecules like DNA. Loss of water from cells will reduce their size and increase their density, thereby affecting their buoyancy and rate of sedimentation. The osmotic effect on cells and macromolecules may be reversible, though it is a possible source of error that should be avoided.